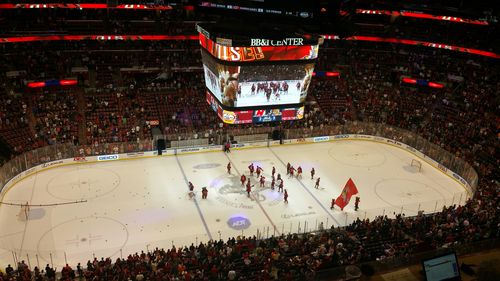 TWITTER: @GeorgeRichards
With both teams staring down another long summer, Saturday's season finale between the Panthers and visiting Devils could have been a sloppy mess.
Although it was no masterpiece, Florida's 3-2 victory gave it a push into next season and a sense of a little accomplishment.
Not only did the Panthers win the final two games, but their 25-point improvement from last year's 29th place finish was biggest in the league.
Florida ended with 91 points -- only the fifth time the Panthers have eclipsed the 90-point mark in franchise history.
"We weren't knocked out until Game 79,'' general manager Dale Tallon said. "We're not happy about it, but we're going in the right direction.''
Said coach Gerard Gallant: "It wasn't a meaningful game in the standings but we worked hard. We deserved to end the season in the right way.''
One of Tallon's biggest offseason moves may be resigning ageless Jaromir Jagr to either a one or two-year deal.
Saturday, Jagr pulled in a long rebound from a Dmitry Kulikov shot and out-muscled Cory Schneider to put in the game-winning goal with 7:37 left -- less than 90 seconds after the Devils had tied it.
Afterward, Jagr smiled when he and Tallon joked in the locker room and continued to express his desire to remain with the Panthers.
A deal could be made before Jagr, 43, heads back to Czech Republic.
"We're getting close; I want $10 million and they're giving me $1 million,'' joked Jagr, who made $3.5 million in base salary this season.
"It's pretty close, it's almost done. I think it's close and I feel like the team wants me here and I love this team. It's going to happen pretty soon.''
With a playoff spot up for grabs in Tampa and Buffalo, Florida and Jersey played a uninterested and scoreless opening period.
Things changed in the second with Jordin Tootoo putting the Devils on the board 1:50 in. Dave Bolland tied it after taking a crisp pass from Brad Boyes on the doorstep and putting it past Schneider.
"You don't want to go out with a loss,'' Bolland said. "We had a good improvement and we're disappointed we didn't make the playoffs. But we improved. That's what we're working for.''
Florida led for the first time when Jonathan Huberdeau followed Jagr's rebound and scored. With the game tied at 2, Jagr jumped all over Kulikov's rebound and beat his former teammate.
"These are tough games to play with both teams being out of the playoffs,'' said Jagr, acquired in a deal with Jersey on Feb. 26. "We wanted to win it but it was tough to play. If you're here you should enjoy it. I think we did.''
MONTOYA STARTS
Al Montoya started the final game of the season after missing the previous five weeks with a groin injury.
Montoya replaced an injured Roberto Luongo during a game against Toronto on March 3. Montoya then got hurt himself but was forced to continue on until replaced by Luongo.
"This team worked hard in front of me,'' Montoya said after making 31 saves for his first win since March 1 against Tampa Bay. "I wanted to give them a chance to win and they gave me that chance.''
-- Steven Kampfer injured a knee when he was taken out by Steve Bernier during the third period. Kampfer had to be helped off the ice by Jussi Jokinen and trainer Dave Zenobi but seemed in good spirits as he visited with family after the game.
"I'll be fine,'' Kampfer said as he wore a new knee brace.
Bernier was slapped with a kneeing major as well as a game misconduct. Alex Petrovic was hit with a misconduct for fighting in defense of his teammate.
-- Erik Gudbranson was out after being knocked out in the first period of Thursday's game with Kampfer replacing him.
-- Gallant started veterans Tomas Kopecky and Scottie Upshall in what could be their final game with the team. Both signed four-year deals with Florida during its roster overhaul in 2011.
-- Tallon confirmed rookie Aaron Ekblad has been invited to join Team Canada for the upcoming World Championships.
-- Jagr's goal was his sixth with the Panthers and first without Sasha Barkov or Huberdeau assisting on it.
"I can do it without them, see?,'' Jagr said with a grin.
"I have to negotiate; those guys are slowing me down.''