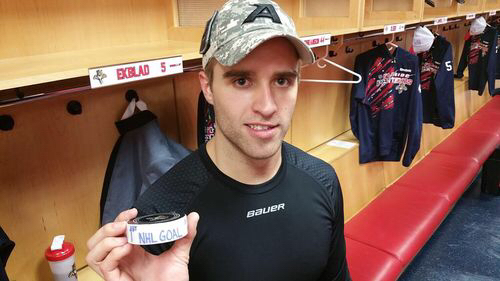 The Panthers are in line to have their second NHL Rookie of the Year in the past three seasons as defenseman Aaron Ekblad was named one of three finalists for the Calder Trophy on Thursday.

Calgary's Johnny Gaudreau and Ottawa's Mark Stone -- both forwards -- are the other two Calder finalists. The winner will be announced at the NHL Awards Show in Las Vegas in June.

Nashville forward Filip Forsberg, considered a favorite to win the award early in the season, didn't finish in the top three in voting.

Ekblad, who will play for Team Canada at the World Championships in Czech Republic next month, wasn't available for comment Thursday but spoke of the possibility of winning the award in the final week of Florida's season.

The award is voted on by the Professional Hockey Writers' Association. Jonathan Huberdeau is the Florida's lone winner of the award, taking it in 2013.

"It would be great, it would be awesome,'' Ekblad said late last month.

"I know for a fact the guys going after this trophy are great guys. Best of luck to whomever wins it.''