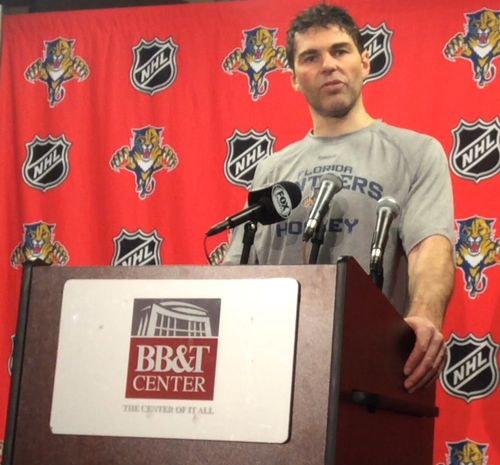 TWITTER: @GeorgeRichards
As the Panthers' equipment staff packed away the final pieces of the locker room Sunday afternoon, Jaromir Jagr was on his phone in the hallway.
A deal to keep the future first-ballot Hall of Famer in South Florida for at least another season was done.
General manager Dale Tallon announced the Panthers signed Jagr to a one-year contract after just about everyone -- save for Jagr and Tallon -- had departed the BB&T Center for the summer.
"This team has a big future,'' Jagr said. "Hopefully I can be part of it.''
Florida's offseason, which likely won't be as busy as past years, was off to a pretty good start.
"Once he got here, and he saw all the talent, he got on board and was really excited about it,'' Tallon said. "It's win-win for everyone.''
Florida acquired Jagr, 43, on Feb. 26 in a deal with New Jersey, sending a third and a fifth round draft pick to the Devils -- basically what the Panthers got back in trading away Tomas Fleischmann and Sean Bergenheim.
Jagr was scheduled to become a free agent on July 1 but after Saturday's 3-2 victory over New Jersey in the season finale, Jagr indicated he wasn't going anywhere just yet.
"First off, I'm glad I got traded here. I didn't really know how good this team is,'' Jagr said Sunday.
"A lot of people thought I was done. Those young guys gave me extra energy, extra life. I'm glad to be coming back next year.''
Tallon made signing Jagr a priority and put things in motion when he met with Jagr's agent in Montreal last month.
A big reason why Tallon was in a hurry to sign Jagr was his revitalized play alongside youngsters
Sasha Barkov (19) and Jonathan Huberdeau (21).
That trio was on fire in the final five weeks of the season as Jagr had six goals and 18 points in his 20 games with the Panthers; Barkov had seven goals and 15 points during that span and Huberdeau had six goals and 21 points.
"It's great for this franchise to get a superstar of his ability and his leadership quality, you can see the young guys how much they look up to him and respect him,'' Tallon said.
"The play of Huberdeau and Barkov really improved. Nick Bjugstad is excited to follow in his footsteps. He's a great role model for our guys. It's a great piece to have, gives us stability. Shame on me for not trading for him sooner.''
Jagr's star power -- he won the Stanley Cup in 1991 and '92 with the Penguins before Florida even had an NHL hockey team -- was evident the day Tallon made the deal. 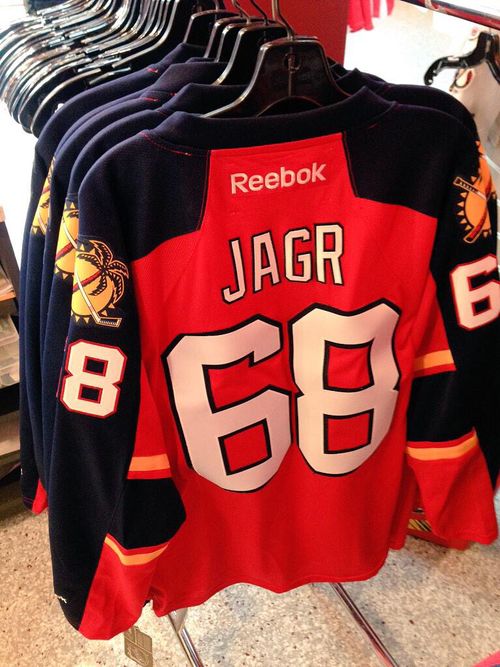 Although he has one of the more recognizable names in all of sports, Jagr has been able to blend in and not cause too much of a stir when he's out in the public due the nature of the South Florida hockey market.
With the Panthers hoping they're on the verge of becoming a perennial playoff contender -- "I'm excited about the next decade,'' Tallon said -- Jagr may find things different around town next year.
"Let's change it,'' said Jagr, who is fourth on the NHL all-time list in scoring, fifth in goals and 11th in games played.
"People have started to realize, at least what I heard, was this is a different team, these are the different Florida Panthers. We have a lot of talent, a lot of speed. We can beat anybody.''