WORKING HIS WAY BACK: Rob Schremp spent past four years in Europe, will have chance to make Florida Panthers' AHL Portland Pirates TWITTER: @GeorgeRichards
When Rob Schremp signed to play in Sweden, he figured he was in for a short European hockey vacation.
"I thought I was going to go there and come right back,'' Schremp said.
His stay turned into an extended one as he spent the past four years touring Europe by playing in five different leagues for teams in Sweden, Latvia, Austria and Switzerland.
"Soon it was like, 'aw man, I'm stuck here','' Schremp said.
"Now, I'm ready to come back."
The well-traveled 29-year-old -- who was a first round pick by Edmonton in 2004 -- is hoping the Florida Panthers have a place for him.
Schremp has been practicing at the Panthers' IceDen the past few weeks hoping to catch the eye of general manager Dale Tallon.
Schremp may have a chance to remain in South Florida some time down the line as he accepted Florida's offer to try out for the AHL Portland Pirates.
Although Schremp would like to make it back to the NHL for the first time since he suited up in the second-to-last game in Atlanta Thrashers history, just staying on this continent is a start.
"It's my dream to play in the NHL, to just play in North America,'' said Schremp, who has played in 114 NHL games with the Oilers, Islanders and Thrashers.
"I think playing Europe makes you gain a little appreciation of what's back here, what you maybe took for granted when you were here. It would be an honor to be able to come back, be with my buddies again. It's my goal and I'm pushing hard for it.''
When the Thrashers moved from Atlanta to Winnipeg, the team changed its management team. Rick Dudley, the GM who brought Schremp to Atlanta during what would be the team's final season in the south, didn't go with the team to Winnipeg. Schremp turned down Winnipeg's minor-league offer in 2011 for a contract in Sweden figuring he had played enough AHL hockey.
"Guys talk about going to play in Europe as just another place to play,'' said Schremp, who scored 47 goals in 217 AHL games for three different teams before going to Sweden.
"There are some great leagues there, good hockey and a lot of great people. But it's a totally different style. The rink is massive, like a rugby pitch. You would think with the big rink it would be more offensive, but teams have really tightened down." 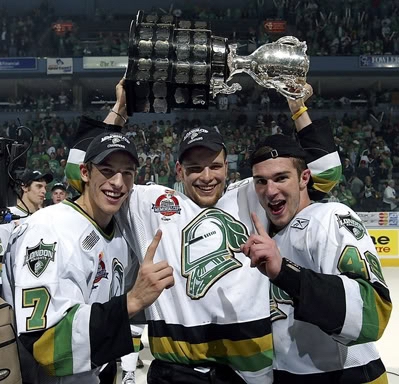 One of the top junior players in Canada as a youngster, Schremp scored 57 goals in 57 games with the London, Ontario, Knights in 2005-06 and scored 126 goals over three OHL seasons.
Florida center Dave Bolland played with Schremp in London and the pair won the 2005 Memorial Cup by beating Sidney Crosby's Rimouski team as both scored goals in the championship game.
That kind of success, however, has eluded Schremp as a professional. He was drafted 25th overall by Edmonton but was eventually waived by the team and picked up by the Islanders.
New York also waived Schremp, leading to his brief time in Atlanta.
"I've grown up a lot over the years and now all I want is a shot to prove my game,'' said Schremp as he sat next to Bolland's locker stall in Coral Springs.
"I'm in a different spot now, I'm a different guy.''
After a season in Sweden, Schremp left for the KHL and a stint in Latvia.
Last year, Schremp played in Switzerland and according to his agent -- former Florida forward Serge Payer -- he had a contract offer to return there this year as well.
"In years past, I think I panicked a little bit because I didn't have a job,'' Schremp said of his extended term in Europe.
"When someone called, I took it. This year, I said no. I have to be patient and try and get back.''
Schremp wants to stay in North America and seems willing to fight the long odds to do so.
As training camp gets closer, there are plenty of players who spent time in the NHL last season without a job.
That includes a large number of players who played for the Panthers last season who remain unsigned including Tomas Fleischmann, Sean Bergenheim, Tomas Kopecky and Brad Boyes.
Scottie Upshall recently accepted a PTO from the St. Louis Blues.

The Panthers are expected, like most teams, to offer at least a few unemployed NHLers a professional tryout (PTO) and a chance to make the team out of training camp.
Schremp will get a chance to make Florida's minor league team and have the opportunity to show what he's got.
Schremp is expected to report to Portland's training camp on Sept. 27 although there could be room for him to start at Florida's camp next week.
"It would be a dream come true,'' said Schremp, who scored 20 goals in 114 NHL games and had 44 goals in Europe since leaving the Thrashers four years ago.
"I'm working as hard as I can. That's all I can do right now.''