NATURAL CHEMISTRY: Sasha Barkov and Jaromir Jagr have something special going on with Florida Panthers 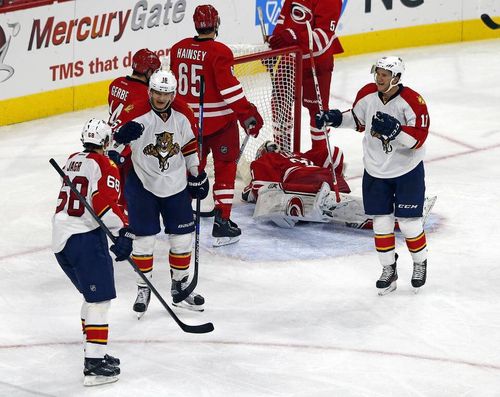 TWITTER: @GeorgeRichards
Sasha Barkov has been back in the Panthers' lineup for a week now and his presence has definitely been felt.
Barkov, who missed 10 games with a broken bone in his hand, returned to his slot centering Florida's top line and it has created numerous scoring chances.
"It's too bad he got injured,'' Jaromir Jagr said Sunday, "because I think we would have a better record for sure. And, personally, I think I would have scored more goals."
Saturday, with the Panthers trailing by two goals late, Barkov hopped on a loose puck provided by an Aaron Ekblad shot and beat New York's Henrik Lundqvist to give Florida a chance.
Just 39 seconds later, Jagr hammered a shot that zipped over Lundqvist's shoulder to tie the score and help force overtime.
"He does everything, is great defensively -- sometimes too much so,'' Jagr said of playing with the 20-year-old Barkov. "Not many guys play like he does. He has no limits. He's a big guy, likes to work a lot. If I was him, I would work on his shot a little more. He has a quick release and a good shot.''
In Barkov's three games back, the trio of Barkov, Jagr and Jonathan Huberdeau have combined for three goals, five assists and 23 shots on goal.
Those three aim to keep things going Monday night as the Los Angeles Kings come to Sunrise.
"It's been great being back, playing is much more fun than riding the bike,'' said Barkov, the second-overall pick of the 2013 draft who played in his 135th NHL game with the Panthers on Saturday.
Jagr and Barkov developed instant chemistry when they were paired together last February after the Panthers acquired the now 43-year-old Jagr in a trade with New Jersey.
Of Jagr's eight goals in 18 games with the Panthers this season, Barkov has the primary assist on three of them and the secondary assist on a fourth.
Last year, Huberdeau had the primary assist on four of Jagr's six goals in 20 games with the Panthers, with Barkov having a hand on two of them.
"I love playing with him, I always seem to know where he is on the ice and he's always helping me,'' Barkov said. "He plays an all-around game and I just fill in the holes. I think we can do a lot better, I don't think we have played as good as we can. That's the nice thing about this game; you can always be better.''
Coach Gerard Gallant had to mix things up when Barkov went down Oct. 22 after blocking a shot in Chicago.
Once Barkov was cleared to play, he did not hesitate in putting his top guys back together.
"Barkov is a two-way player and that's what you need,'' Gallant said. "He's a horse and just gets better every game. He brings a lot of offense, brings great defense and is the exact kind of player a coach wants. You can trust him in all situations.''
-- Both the Panthers and Rangers had penalty shot opportunities Saturday night. New York's Chris Kreider had a chance to give the Rangers a 1-0 lead with 6:15 into the game but was stopped by Roberto Luongo.
Florida could have taken its first lead of the night after Reilly Smith was awarded his shot seven seconds after Jagr's tying goal late in the third but couldn't connect against Lundqvist.
-- Although the Panthers had six power play chances, Jagr wasn't happy with officials missing Derick Brassard grabbing Erik Gudbranson's stick on the breakout that led to Rick Nash's second goal of the game nor the bench minor called on the Panthers for having too many men on the ice in overtime.
Florida was forced to play 3-on-4 in overtime after Huberdeau was caught coming off the ice as Jussi Jokinen was going on from opposite sides of the bench.
Derek MacKenzie also has a beef as he took an obvious high stick to the face in the first period -- and apparently lost a tooth because of it -- yet no call was made.
"What kind of calls were made all night long? On the second goal they hold Guddy's stick; it's a joke,'' Jagr said after the game.
Monday: Kings at Panthers
When, where: 7:30 p.m.; BB&T Center, Sunrise
TV/Radio: FSFL; 560 WQAM, 640 WMEN, WMNA 1210.
Series: Los Angeles leads 15-9-3
Scouting report: The Kings, which beat the Panthers 4-1 in Los Angeles two weeks ago, had their three-game winning streak snapped Friday in Detroit and lost 4-3 Sunday at Carolina. The Kings are 2-0 in the second game of a back-to-back set this year.