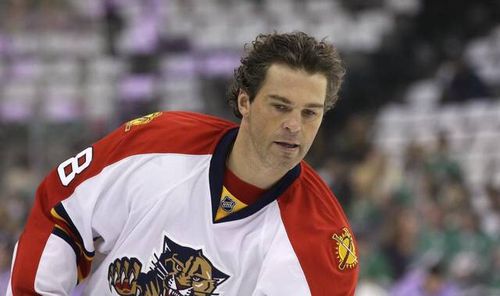 TWITTER: @GeorgeRichards
Jaromir Jagr continued to paw through the NHL's record book, Jonathan Huberdeau kept dishing out assists and backup goalie Al Montoya impressed again as the Panthers beat visiting Washington 4-1 on Thursday night.
The Panthers snapped a two-game slide by beating the Capitals for just the third time in their past 15 meetings.
Of Florida's recent wins, this is the first Washington left without at least securing a point.
The Panthers have won six of its past eight games as it heads back on the road for a four-game trip which starts Saturday in Boston.
Florida went 4-1 on its previous road trip which ended Sunday.
"We found a way, battled hard,'' coach Gerard Gallant said. "Hopefully we [play] this road trip like the last one. The last road trip was good and hopefully we're confident on the road.''
Jagr, 43, scored his 731st career goal 51 seconds into the game after redirecting a long shot from Dmitry Kulikov.
"It was a good start,'' Jagr said, "exactly what we needed."
That goal tied Jagr with Hall of Famer Marcel Dionne for fourth on the NHL's all-time list.
With his next goal, Jagr -- who had gone eight games without one before Thursday -- will take over sole possession of fourth as he now sits 10 back of Brett Hull for third place.
"I was waiting for a long time, had some chances and couldn't score,'' Jagr said. "I'm glad it's behind me. Every record has karma around it, it's hard to break. It's not the first time I was stuck on a number. It always seems like a huge wall."
On the other end of the ice, Montoya got a somewhat surprising start Thursday as Roberto Luongo has seen most of the playing so far this season.
Montoya, who picked up Florida's previous win last Friday in Columbus, ended with 19 saves for his personal two-game winning streak.
Montoya was able to watch much of Thursday's game as Florida bottled things up by dictating the pace of play for much of the night.
"They are a great team that fires on all cylinders,'' Montoya said. "I didn't get the shutout but we got the win and I'll take that any night. ... Our team did a phenomenal job.''
Florida dominated much of the game yet only had a 1-0 lead to show before Brandon Pirri teed off on a Brian Campbell feed and sent a shot of goalie Philipp Grubauer's shoulder on a power play chance in the second.
In the third, Florida gave Montoya even more breathing room as Huberdeau slipped a pretty pass to Aaron Ekblad on a breakaway and Ekblad buried it. Huberdeau ended with a pair of assists and leads the team with 14.
The Capitals didn't seem too interested in doing much against the Panthers after winning six of their past seven games. The team had their dads on the trip and looked sluggish as coach Barry Trotz shook up his lines throughout trying to find some sort of spark.
Alex Ovechkin scored with Washington's goalie on the bench with 2:08 left, spoiling Montoya's first shutout since New Year's Eve in 2013 while with Winnipeg.
Logan Shaw ended it with an empty-net goal with 1:04 remaining.
-- Thursday's game was delayed 15 minutes after Sunrise emergency personnel were called to a nearby accident.
When it was discovered no paramedics were on site, the two teams went back to their locker rooms.
-- The Panthers lost defenseman Steven Kampfer to an disclosed lower body injury during the first period.
With Alex Petrovic out, Florida is expected to recall a defenseman from its AHL team in Portland, Maine.
Dylan Olsen has seven games remaining as an emergency recall after playing three in place of Petrovic.
Brian Campbell also appeared to suffer a broken nose after being boarded by Tom Wilson in the third.
Campbell returned but Wilson didn't; he was hit with a five-minute major and a game misconduct.