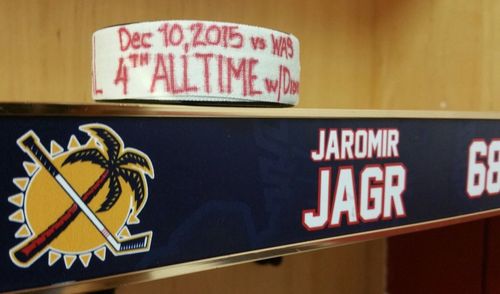 TWITTER: @GeorgeRichards
Jonathan Huberdeau would love to have more goals this season.
A prolific scorer throughout his junior career, Huberdeau came to the Panthers touted to be Florida's biggest scoring threat in years.
Today, Huberdeau's most important asset to the Panthers' offense right now may be his passing.
Huberdeau notched two assists in Thursday's 4-1 win over the Capitals.
Huberdeau's first came on Jaromir Jagr's historic 731st career NHL goal which put him into a tie for fourth all-time as he dug the puck out and rifled a perfect shot to Dmitry Kulikov. Kulikov's long wrist shot was redirected by Jagr and into the net.
In the third period, Huberdeau and Aaron Ekblad broke loose with Huberdeau sliding a pretty pass to Ekblad who scored to make it 3-0 and put the Capitals away.
"It's been tough scoring goals, but to me, scoring or setting up goals by passing is fine by me,'' said Huberdeau, who has three goals this year (two coming last week) and leads the team with 14 assists.
"I just want to help the team consistently. The puck is going to go in. I'm playing for the team and if I see a chance to pass I will, and if the shot is there, I'll take it. I've been shooting more lately. It's going to go in."
Coach Gerard Gallant switched up his lines a few weeks back, splitting up Huberdeau, Jagr and Sasha Barkov.
"He's a great player, one of the smartest players in the league,'' Barkov said. "He makes passes I've never seen before. It's a lot of fun to play with a guy you know can put the puck anywhere you want.''
Last Sunday in New Jersey, Gallant put the trio back together and they have gone back to their old ways of creating plenty of chances by hogging the puck and staying deep in their opponents' zone.
"They support the puck, make the short pass and are tough to defend in the offensive zone,'' Gallant said. "They watched what was successful last year, take pride in what they're doing and are playing real well.''
-- Center Nick Bjugstad (upper body) was placed on the injured reserve and is not expected to join the Panthers on their upcoming road trip and may be weeks away from rejoining the lineup.
-- Defenseman Steven Kampfer was hurt during Thursday's game and had an MRI on what is thought to be an injured knee. Kampfer did not travel to Boston, but may join the team later on the trip.
"I'm hoping it's not real bad," Gallant said.
Dylan Olsen was brought back on an emergency recall after being sent back to the AHL last week. Olsen played well in three games in place of Alex Petrovic.
"I came here to do a job and feel like I did what they wanted me to do,'' Olsen said in Columbus before heading back to Portland, Maine.
Petrovic has missed the past seven games but skated Friday and was said to travel with the team to Boston.
-- Brian Campbell didn't suffer a broken nose after being boarded by Washington's Tom Wilson but did receive numerous stitches. Campbell returned to Thursday's game and practiced Friday.
Saturday: Panthers at Bruins
When, where: 1 p.m.; TD Garden, Boston
TV/Radio: FSFL; WQAM 560, WMEN 640
Series: Boston leads 44-34-6
Scouting report: The Panthers have lost 17 of the past 21 to Boston including a 3-1 setback in Sunrise in October. Boston has lost three of its past five but is coming off a win in Montreal on Wednesday.