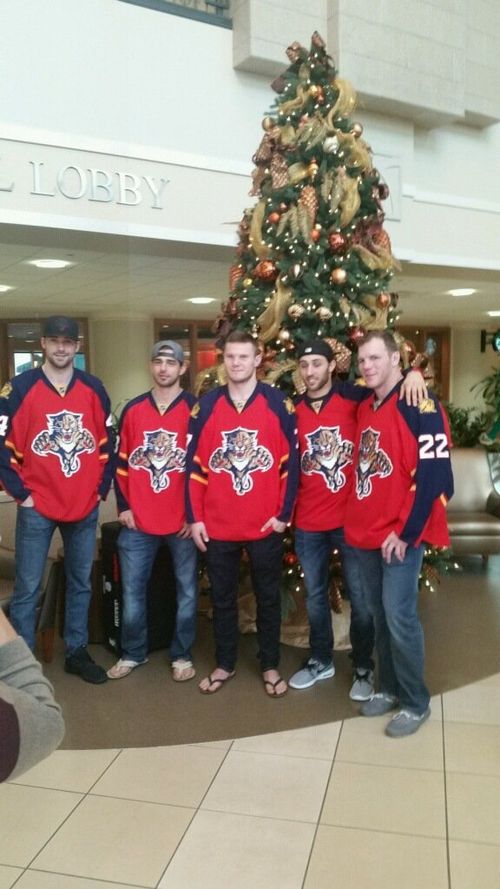 TWITTER: @GeorgeRichards
With the Panthers getting their $86-million financial package passed by the Broward County Commision on Tuesday evening, the team is looking forward to a brighter future in South Florida.
Doug Cifu, co-owner of the team, said the Panthers will continue to invest in the on-ice product moving forward.
The Panthers have a lot of young, talented players who need to be signed in the coming years. Cifu said locking up Florida's core players is key to the Panthers' future success.
Florida has a number of players who will be looking for new contracts soon including center Sasha Barkov, winger Jonathan Huberdeau (who is signed through next season) as well as defensemen Erik Gudbranson and Aaron Ekblad.
"We want to focus now on how we fit guys in under the salary cap,'' Cifu said. "Our commitment is to take the great guys we know are the foundation of our franchise and keep them here for the long haul, build a nucleus of players who want to be winners here.''
Last year, the Panthers started locking up their young players by signing center Nick Bjugstad to a six-year contract extension worth $25 million.
Barkov is in his third season and will become a restricted free agent after this season. It's unknown what Barkov will be seeking in his coming negotiations, but the Panthers are expected to offer a long term deal, perhaps even the league-maximum of eight seasons.
Gudbranson, in his fifth NHL season, will also be looking for a new contract after the two-year bridge deal signed in 2014 expires after this season.
"It's good that the owners care about our team and it's a great opportunity here,'' Barkov said. "I see a bright future here with all the good young guys we have. I'm having fun here.''
Aside from Barkov, Ekblad and Gudbranson, Florida will also likely want to work out new deals with pending restricted free agents Brandon Pirri, Vincent Trocheck, Connor Brickley, Logan Shaw and Quinton Howden as well.
"We know we're real close to being a great team,'' coach Gerard Gallant said. "We just want to keep building on that. It's good to hear that from your ownership."
For Ekblad, last year's rookie of the year, helping build the Panthers into a perennial winner is something he says can happen. Keeping the group they have already, while potentially adding some free agents to the mix, will go a long way in building a winning team which after Tuesday's county vote, isn't going anywhere anytime soon.
"The most important thing for us is winning hockey games,'' Ekblad said. "We appreciate them investing in us. We have a lot of young guys who are very good players. It's exciting to be able to stay together and build up a chemistry here.''
-- Gallant said his players didn't know how the county vote went before Tuesday's game with Ottawa.
Gallant knew the Panthers succeeded, however, and said ending any relocation rumors helps his team in the long run.
"We love playing down here, it's good to know we're staying,'' Gallant said. "I knew that in the past, but the feeling is that it's a done deal and the guys are excited they don't have to worry about it.''
-- Bjugstad has been dealing with an undisclosed upper body injury the past few weeks and left practice in St. Louis last Monday, returned to Florida and hasn't skated since.
Gallant said Bjugstad is out indefinitely and will not travel with the team for its game Saturday in Boston. Gallant hopes Bjugstad can join the team next week in New York but added "they haven't been telling me a whole lot."
Bjugstad, 23, is not believed to have suffered a concussion as some have speculated. Bjugstad missed the start of the 2013-14 season after being concussed during rookie camp.
-- A group of players visited the Chris Evert Children's Hospital on Wednesday to spread a little holiday cheer. The above photo is courtesy of Florida in-game host Andrea O'Campo.

When, where: 7:30 p.m.; BB&T Center, Sunrise
TV/Radio: FSFL; WQAM 560, WMEN 640, WMNA 1210
Series: Washington leads 60-45-9
Scouting report: The Capitals, who beat the Panthers in overtime on Oct. 31, had their six-game winning streak snapped Saturday in Winnipeg. Washington bounced back by beating Detroit in a shootout on Tuesday.