« GETTING BACK TO WORK: Florida Panthers back on the ice, ready to keep winning streak alive ... Nick Bjugstad returns to practice ... Brandon Pirri makes art out of glass ... Jaromir Jagr gets new choppers ... Steven Kampfer still out | Main | RENEWING A RIVALRY: Panthers not overlooking Canadiens despite their struggles ... Nick Bjugstad moves closer to rejoining the lineup »

LOOK WHO IS ATOP THE STANDINGS: Panthers claim first place in Atlantic Division after 3-2 win over Blue Jackets ... Sasha Barkov scores two off Jonathan Huberdeau passes, Aaron Ekblad once 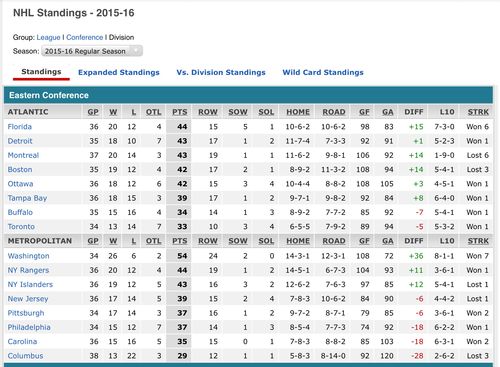 TWITTER: @GeorgeRichards
On Thanksgiving morning, the Panthers were 16 points behind Montreal for first place in the Atlantic Division and things didn't look good.
After losing nine of 12 games, few figured the Panthers had the team to make up that sort of real estate.
Well, on Sunday evening, the Panthers took sole possession of first place in their division by beating Columbus 3-2 in front of 16,902 at BB&T Center.
"We have been playing great for a while,'' said Sasha Barkov, who scored twice Sunday. "We have really good players on this team. We have high confidence. Last year, we weren't even close to this spot. We just need to keep playing this way, winning games.''
Since Thanksgiving, the Panthers have been one of hockey's hottest teams, with a pair of five-game winning streaks during a run of victories in 12 of their past 15 games.
Florida's current six-game winning streak is its longest since 2008.
Racking up points by the dozens helped the Panthers leap not only the slumping Canadiens -- who have lost 10 of 11 and their past six coming into Tuesday's date with the Panthers -- but others in the division as well.
On Thanksgiving morning, the Panthers were five points out of a playoff spot but have since jumped Ottawa (nine back) as well as Detroit, Tampa Bay and Boston (five points).
Florida was also just two points up on Columbus for last place in the Eastern Conference. By Sunday night, that lead had grown to 15.
Obviously there is plenty of hockey to be played, but today, Florida holds home ice in at least the first round of the playoffs.
For a young team playing on a team with little tradition, it's a start.
"We've been on a pretty good run lately, but this is just game 36,'' said Shawn Thornton, who won the Stanley Cup with Boston and Anaheim and is a veteran of 101 postseason games -- which is more than the Panthers have appeared in.
"I'm happy with where we're at, but we have a long way to go. We just have to stay the course, keep playing smart.'' 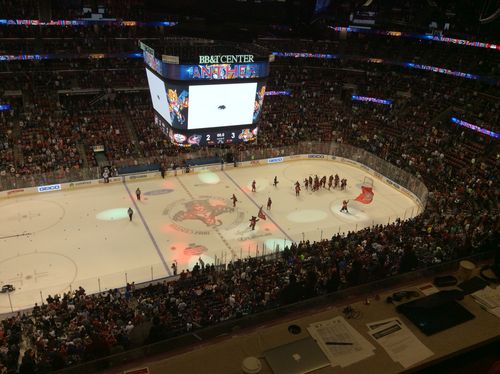 Sunday, the Panthers came out flying against a slumping Columbus team fresh off Saturday's loss in Tampa Bay.
Fiery coach John Tortorella had plenty to say about his team in the pregame media scrum and it didn't seem to help any.
Florida jumped all over the Blue Jackets, outshooting them 19-1 in the opening period all while taking a 2-0 lead into the first break.
"Obviously we wanted to win as many games as we could early on,'' said Aaron Ekblad, who opened the scoring by tracking down a Reilly Smith rebound and sending a soft wrist shot past goalie Curtis McElhinney.
"We got off to a slow, average start but the past month, it's no fluke that we're winning. We haven't been good for a week. We're really learning to carry the momentum. We want to stay on top, but teams will be gunning for you.''
Columbus battled back in the second, taking aim at Roberto Luongo early in the period before cutting into its deficit on a Brandon Saad goal 7:59 in.
The score remained 2-1 until Barkov teed off on a nice feed from Jonathan Huberdeau 7:23 into the third.
Columbus made things interesting when it made it 3-2 with 8:34 left, but Luongo and the Panthers shut things down to open this six-game homestand 3-0.
"It's exciting,'' coach Gerard Gallant said. "It's almost a new year and being in first place means a lot. Again, we're probably five or six points and we're out of the playoffs. But if you keep winning, keep getting points, it's a lot of fun.''
-- Luongo took a puck off his shoulder area during the pregame skate from teammate Vincent Trocheck and headed into the training room early.
Gallant said he spoke to goalie coach Robb Tallas and was assured Luongo was good to go and he started the game.
Luongo didn't see many pucks in the opening period, but ended up making a number of key saves to help secure the win.
-- For the second consecutive game, Florida seriously outshot its opponent, this time 32-17. Last Tuesday, the Panthers outshot Ottawa 40-16 in a 2-1 shootout victory.
-- Sunday's win put the Panthers atop their division for the first time since the final game of the 2011-12 season when Florida claimed its lone Southeast Division title.
Of the current roster, only Erik Gudbranson, Dmitry Kulikov and Brian Campbell remain from that team.
"We're on top right now, we just need to keep going,'' said Huberdeau, who joined the Panthers the following season.