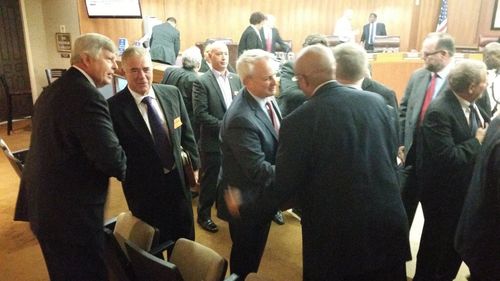 TWITTER: @GeorgeRichards
Doug Cifu told the Broward County Commission his dream of a Stanley Cup parade down Las Olas Boulevard in Fort Lauderdale.
Commissioner Barbara Sharief jokingly stopped the co-owner of the Panthers, telling Cifu any such parade had to "stay out west."
Cifu isn't concerned of such logistics, of course. He's just happy if the Panthers ever do reach the ultimate height of hockey, it will likely do so in Broward County.
Tuesday, the commission voted 5-3 to grant the Panthers' request for an $86-million financial grant which will keep the team in South Florida -- and in the county-owned BB&T Center -- for the foreseeable future.
"What the county did was ... allow us to put a professional product on the ice and bring world-class entertainment to Broward County,'' said Cifu, whose team has a contract with the county through 2028.
The commission meeting was highly watched by officials around the league and in cities who hoped the deal would fall through and the Panthers would become relocation candidates.
Both Las Vegas and Quebec City have applied for expansion teams with Seattle and Kansas City also expressing interest for a future team.
"This is the first county commission meeting where half of Canada is watching,'' Mayor Marty Kiar joked.
The Panthers will not be that team looking for a bigger, better deal somewhere else, at least not now.
"We have no intention of moving this team, we never want to move,'' Cifu said. "We want to be here. I don't speak French and I don't want to go to Seattle or Kansas City or anywhere. We want to be in Broward County. We're trying to build the right culture here. The outpouring of support, frankly, has been overwhelming."
Sharief, who represents parts of Pembroke Pines and Miramar, was the deciding vote as the Panthers clinched the vote early by going 5-0 before the final three commissioners voted against it.
Two of those (Chip LaMarca and Kiar) gave vocal support to the deal before voting against it.
"I was just happy we had five,'' Cifu said, smiling. "I'm a glass half-full kind of guy." We didn't have to go to overtime and we still won."
Of the three districts which represent the beaches -- where the lion's share of the tourist tax money is raised -- only Tim Ryan voted for the Panthers.
"This gives us the opportunity to continue to provide a first-class facility to our fans, bring more big events to town,'' Florida executive chairman Peter Luukko said.
"More importantly, it gives us the financial stability, to improve our team and be better on the ice. It gives us the ability to see the light at the end of the tunnel and be able to invest in the team and in the building.''
The Panthers deal will give them significantly more tourist tax money to help offset massive financial losses including $36 million last season alone.
"Our losses have been substantial so it doesn't solve the problem completely,'' Cifu said. "It goes a long way in relieving the burden of having to operate the building, putting on a roof, fixing the stands. It goes a long way. Now we can focus on building a world-class organization."
The Panthers and county administrators negotiated the terms over the past year with the vote going easily after first being presented to the commission in October.
The Panthers' old lease had the team getting almost all of the revenue created by the arena but the new deal lowers the threshold for profit-sharing between the Panthers and county.
Owner Vinnie Viola will also provide a letter of credit which guarantees the county's investment if the team were to try and relocate or declare for bankruptcy.
"It's an insurance policy for us,'' Ryan said before casting the first 'yes' vote.
The new deal also promises the NHL will bring its All-Star Weekend back to South Florida in the coming years as well as spend $1.5 million investing in local youth hockey initiatives.
Although the team has a 13-year lease, it can opt out after eight provided it can prove it lost $100 million in the first seven years of the new pact and gives a year notice.
The county would also get a 10 percent cut if Viola and Cifu sold the team and will receive part of the team's share of potential -- and probable -- NHL expansion fees in the future.
The Panthers will continue paying over $5 million per year to pay off their share construction debt of the 17-year-old arena.
Although the meeting was packed with team executives, employees and supporters (most of whom seemed to have a financial stake in the team sticking around), no players were in attendance.
With the meeting going almost five hours, that wasn't practical with the team hosting the Ottawa Senators Tuesday night in Sunrise.
The vote was a topic of conversation, however, before the game as Florida's social media friendly players have heard the 'Quebec City Panthers' talk over the years.
"Since this ownership has taken over, they've made strides in growing the game here,'' Shawn Thornton said. "We need more wins to become relevant around here. But it's trending upward. We want to help grow the game here. We all love it here."
Said Erik Gudbranson: "This is where our hearts are, this is where we want to be. We want to create something special here."