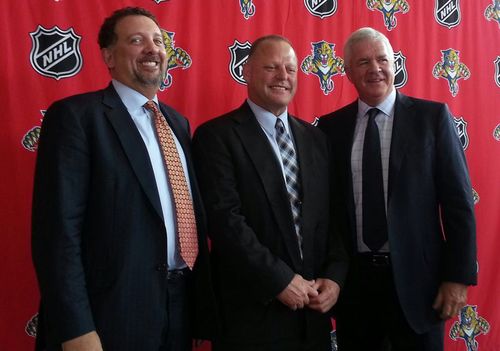 TWITTER: @GeorgeRichards
It appears Dale Tallon will be allowed to finish the job he started.
So, too, will coach Gerard Gallant.
On Friday, the Panthers officially announced Tallon signed a multi-year contract extension to remain general manager through 2019.
A team source also said Gallant agreed to a two-year extension through 2019.
Gallant's signing should be announced by Tallon before Saturday's game against the Rangers.
"It's good, things are positive and in the past month, a lot of good things have happened for our team,'' Gallant said Friday before news of his contract leaked.
"We're winning a lot of games and made the deal with Broward County. Things are moving forward."
The Panthers also promoted Tom Rowe to associate general manager.
Rowe had served as Florida's AHL coach in San Antonio and Portland, Maine, for parts of the past three seasons.
"I'm excited about the direction of this organization. We have a great young team,'' Tallon said after thanking owners Vinnie Viola and Doug Cifu for showing faith in him.
"We're going to continue building through the draft, keep developing. The blueprint, the pieces are finally coming together. I'm looking forward to the next three years. ... The goal is to make this an elite franchise and win multiple championships. We're headed in the right direction."
Tallon, in his sixth season, is the second-longest serving general manager in franchise history behind current Ottawa GM Bryan Murray (1994-2000) and should surpass him by this time next season.
While Murray oversaw Florida's most successful seasons from 1995-97 as well as a playoff berth in 1999-2000, Tallon's Panthers are just now coming into their own.
Although Tallon's second team won the Southeast Division in 2011-12, only a handful of players remain as he has retooled the roster through the draft and various trades and free agent additions.
"You see some of the fruits of Dale's labor coming to fruition and I'm happy for him,'' said defenseman Brian Campbell, the first high-profile player Tallon brought to the Panthers in 2011.
"He's been here for a while now and it's exciting to see the plan keep coming into place. We want to do great things this year.''
Florida goes into Saturday's game riding a seven-game winning streak with wins in 13 of the past 16. With a victory Saturday, the Panthers would set a franchise record for consecutive victories.
The Panthers' success this year can be credited to young players Tallon drafted (Sasha Barkov, Jonathan Huberdeau, Vincent Trocheck, Erik Gudbranson, Aaron Ekblad) as well as those he brought in (Brandon Pirri, Roberto Luongo, Jaromir Jagr) at bargain prices.
Florida's depth has proved strong with a number of recent draft picks working to make the jump either from its AHL team.
The Panthers' pool of prospects currently in college or Canadian junior ranks is also deep.
"You go through a lot of pain in suffering when you're building a team,'' said Tallon, whose team lost its spot atop the Atlantic Division when Montreal won Friday's Winter Classic over Boston.
"It's fun and I'm happiest for the players, seeing their development curve and them buying in to what we're doing. I'm proud of our players, coaches, staff and organization. We're all on the same page, pulling for and believing in each other.''
Gallant is 59-41-10 in his parts of two seasons with the team and is well regarded among his players for an easy-going style while still demanding results.
A former head coach with the Blue Jackets and in the Canadian juniors, Gallant spent two seasons as an assistant with Montreal before getting the Florida job in 2014.
Gallant has one more season remaining on his original contract.
-- Rowe will remain in South Florida for Florida's next two games before heading back to Portland to pack up and move south.
Rowe was originally hired by the Panthers in 2013 when coach Kevin Dineen was fired and San Antonio coach Peter Horachek was brought up to replace him.
A former forward with Hartford, Washington and Detroit, Rowe has mostly been an assistant coach but has head coaching experience in the AHL and in Russia. Rowe is also said to be signed through 2019.
"This is an opportunity of a lifetime," Rowe said on Thursday before his promotion was made public. "When it presented itself, I thought it would be a great thing.''
-- Gallant said center Nick Bjugstad likely wouldn't return from the injured list (migraines) on Saturday but hasn't ruled him out for Sunday against his hometown Minnesota Wild.
Saturday: Rangers at Panthers
When, where: 7 p.m.; BB&T Center, Sunrise
TV/Radio: FSFL; WQAM 560, WMEN 640, WMNA 1210
Series: New York leads 49-32-6
Scouting report: New York, which lost nine of 13 last month, beat the Panthers 5-4 in overtime on Nov. 21. The Rangers have won the past seven against Florida and the past four in Sunrise. Goalie Henrik Lundqvist has won nine of his past 12 at BB&T Center.