« HERE COME THE LEAFS: Panthers hope to avoid pitfall -- and goalie injuries -- like last year ... Roberto Luongo gets start in rematch with Leafs ... Willie Mitchell is out | Main | #SpaceyInSpace For Sale: Florida Panthers now selling the popular if mysterious hoodies at arena » Sasha Barkov broke the news of his six-year contract extension on Twitter Monday night and thanked actor Kevin Spacey “for the good luck,” refering to the blue sweatshirt he was awarded after a big game last month.

The Panthers expect many more big games from the 20-year-old center as he will a cornerstone piece for the franchise for some time.

Barkov, the second overall pick of the 2013 NHL draft, signed what appears to be a team-friendly deal which the Miami Herald has learned will pay him an average of $5.9 million per season.

The contract is expected to officially be announced Tuesday at a press conference before the Panthers play host to Toronto at BB&T Center.

Centering Florida’s top line alongside Jaromir Jagr and Jonathan Huberdeau, Barkov has 12 goals with 18 assists despite missing 10 games with a broken bone in his hand. Florida suffered through its season-long five-game losing streak without Barkov in the lineup.

“Not many guys play like he does,” Jagr said not long after Barkov returned on Nov. 16 in a victory over Tampa Bay. “He has no limits.”

Florida has also locked up center Nick Bjugstad to a six-year contract which began this season and will now look to sign defenseman Aaron Ekblad to a long-term pact as well. 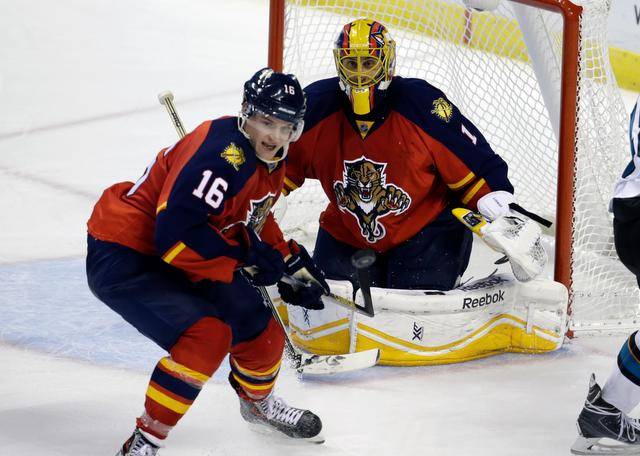 Ekblad, 19, is in his second season with the Panthers and isn’t eligible for an extension until this season concludes.

Florida reportedly had tried to get Barkov to sign for the NHL maximum of eight years but was rebuffed, as expected, by his agent.

“He's a horse and just gets better every game,” coach Gerard Gallant said after Barkov returned from his injury.

“He brings a lot of offense, brings great defense and is the exact kind of player a coach wants. You can trust him in all situations.'”