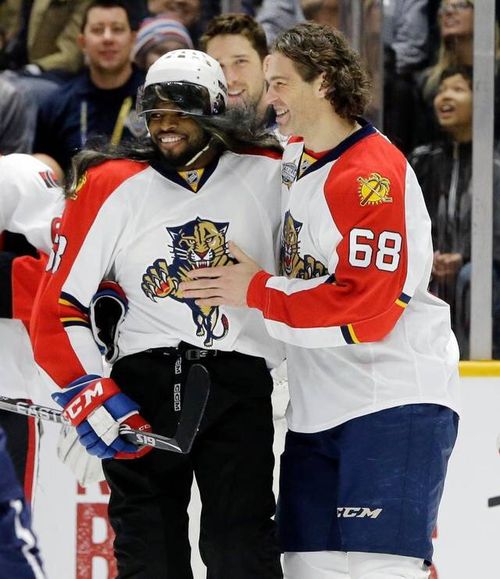 TWITTER: @GeorgeRichards
NASHVILLE
Jaromir Jagr may have been a reluctant member of the All-Star team but once he got to Nashville, seemed to enjoy himself.
"We weren't even sure he was going to be on the plane Thursday so that was a nice surprise right off the bat,'' Roberto Luongo said.
Saturday, Jagr was one of the stars of Saturday's Skills Challenge as Montreal's P.K. Subban came out for his breakaway competition dressed as Jagr complete with a flowing wig.
After Sunday's game, he didn't rule out a return perhaps next year in Los Angeles.
"You never really know what's going to happen,'' Jagr said. "We'll see. I said before I wanted to stay home to practice for the next 30 games. But this was fun, no doubt about it."
No one thought Jagr would dog it once on the ice but both Gallant and Luongo seemed taken back by how much Jagr put into Sunday's game.
Jagr scored in the first period -- he is in a seven-game slump, not scoring since Jan. 10 -- and was working hard defensively in the championship.
"He back-checked hard twice and I'm going to use that video for our games," coach Gerard Gallant said.
Said Luongo: "He doesn't even do that in Florida. I might have to have a chat with him on the flight home."
After the game, Jagr couldn't hide his pleasure in current AHLer John Scott winning the game's MVP vote after all he had been through.
The NHL, Jagr said, thought Scott's inclusion to the game would be a black-eye on the event since he was a fourth-line enforcer with Arizona. Then, he was traded to Montreal and demoted to the minors to void his All-Star invite.
The NHL eventually relented due to overwhelming backlash toward its dealing with the popular Scott and he became the belle of this country music ball.
"Was I surprised? No. He played in the league, played in the NHL. He played for a lot of years," Jagr said.
"The difference between the best player in the NHL and the worst player is very small. It's not a huge gap, not like it used to be. That's why it's so tough to score right now. The difference between the guys who score a lot of goals -- Ovechkin, Malkin, Crosby, Kane, Toews -- is the power play time.
"There are a lot of guys on the fourth line who have the skill to play on the top two lines. They just didn't get the oppportunity. That's why I'm not surprised at all. The game has changed."
As for Jagr's previous comments that he thought Scott would kill him during the All-Star Game, Jagr said it was in the back of his head.
"I'm glad we didn't have a big lead or he may have jumped on me," Jagr said of the championship game, won by Scott's Pacific team 1-0. "That's why we kept it close."