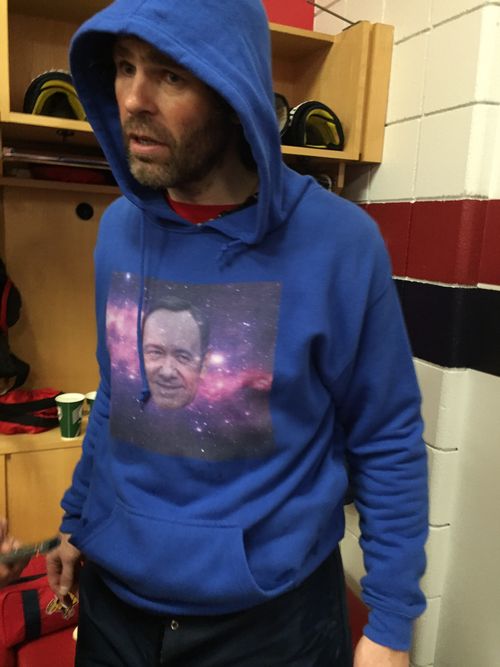 TWITTER: @GeorgeRichards
DENVER
Jaromir Jagr was awarded a secondary assist on Vincent Trocheck's second period goal in Columbus on Saturday pulling him within one point of tying Gordie Howe for third all-time.
Jagr could tie, and obviously surpass, Howe on Thursday against the Avs.
"Seriously, every game they seem to announce another milestone for him,'' Trocheck said. "It's awesome, hopefully he gets it [Thursday].
Said Sasha Barkov: "It's a big thing for me to be on his team and play on the same line. It's like living a dream.''
Garrett Wilson originally was given credit for the second assist but apparently knew it would be taken away eventually.
"He said he never touched it, Jagr passed it right to the point,'' Trocheck said. "[Wilson] wanted to make sure Jagr got credit because every one of those at this point is pretty special."
-- Newly acquired forwards Jiri Hudler and Teddy Purcell didn't travel with the team to Colorado from Winnipeg after Tuesday's game and they are questionable to play Thursday.
Both need to get U.S. visas to come into the country as employees of an American team.
Coach Gerard Gallant said he didn't have an update on either player but both would play against the Avs if everything gets worked out and they can make it to Denver in time for the game.
Quinton Howden worked with Jagr and Barkov in Hudler's place at Wednesday's practice; defenseman Steven Kampfer filled in for Purcell on Florida's third line.
-- Al Montoya took part in Wednesday's practice after being knocked out of Sunday's game in Minnesota after being hit in the head by Marco Scandella.
Mike McKenna, called up from the AHL on an emergency basis, backed up Roberto Luongo on Tuesday.
All three goalies took part in Wednesday's workout.
Thursday: Panthers at Avalanche
When, where: 9 p.m.; Pepsi Center, Denver
TV/Radio: FSFL; WQAM 560, WMEN 640
Series: Colorado leads 20-11-3
Scouting report: This is the 20th anniversary season of the Panthers advancing to the Stanley Cup Finals and being swept by the Avs. Florida won the first meeting 4-1 in October as Roberto Luongo made 31 saves and was in line for a shutout before the Avs scored in the final minute.