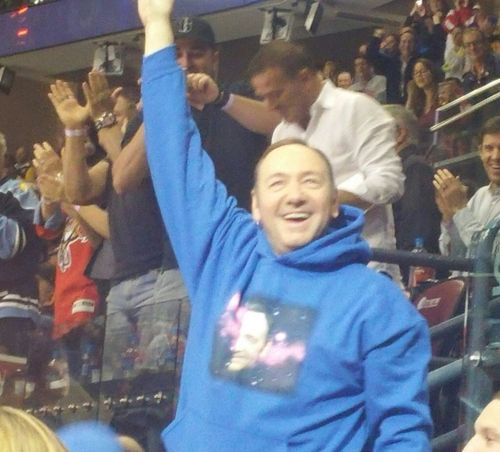 The Florida Panthers' living and breathing "good luck charm" was in the building Saturday night.
They had hoped Kevin Spacey would award the sweatshirt he was the inspiration to the game MVP, yet, despite things looking good in the second period, it wasn't to be.
Although Spacey met with the Panthers following their 5-3 loss to the visiting Red Wings, there was no 'Spacey In Space' hoodie to hand out to a deserving player.
The sweatshirt is a prize given out after wins, and this most definitely was not one of those.
"We said hello to him, but it wasn't as fun as if we had won,'' said Nick Bjugstad, who gave the Panthers a 1-0 lead in the first. "We were down a little bit but we appreciate him coming down, supporting the team. It was cool seeing him on the JumboTron. The fans really loved it.''
Playing in front of a franchise-record regular season home crowd of 20,817, the Panthers built to a 3-1 lead soon after Spacey revealed himself to fans during a break in the second period.
Spacey, who flew to South Florida after visiting patients at a children's hospital in Atlanta earlier in the day, tried to be inconspicuous by blending into the crowd by donning the now famous sweatshirt with his face on it all while covering his face with a cardboard cutout of, well, his face.
The Panthers wouldn't hold onto that 3-1 lead as the Red Wings came charging back.
As was the case last Monday in Brooklyn, Florida lost a game in regulation in which it held a two-goal cushion.
"It was a lousy start to the game and a lousy ending,'' coach Gerard Gallant said. "We have to play 60 minutes and we didn't do that.''
Detroit tied the score 3:52 into the third when rookie Dylan Larkin scored his fourth against the Panthers this season.
Midway through the period, the Red Wings took their first lead of the night when Luke Glendening batted down a shot from Larkin and got the puck past Roberto Luongo.
Detroit closed things out with an empty net goal in the final seconds.
"It's always bad to lose but we were leading 3-1, had the game in our hands,'' Sasha Barkov said. "We let them score a couple and they got the momentum back. Both teams played good, had a lot of chances. We just didn't play a good defensive game. That had been our strength. We fell asleep a couple of times."
Despite the loss, the Panthers have been on quite a tear since Spacey allegedly came into their lives.
Although players are extremely tight-lipped on the meaning of the sweatshirt, it all seems to stem from a chance encounter between the 'House of Cards' star and some players while the team was in New York back in December. 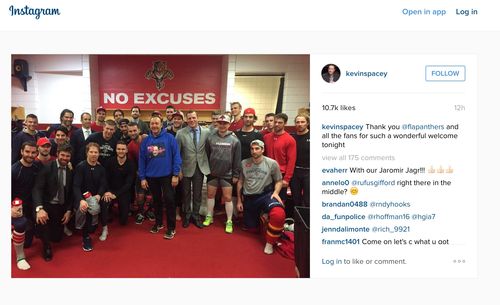 Florida ended up going on a 12-game winning streak soon afterward and has gone 26-11-5 since.
Saturday, Florida -- which was out of the playoff race before the Spacey sighting in New York -- tried to pad its lead atop the Atlantic Division and led 3-1 on goals from Bjugstad, Vincent Trocheck and Teddy Purcell.
Yet Detroit battled back, and trailed by one at the second intermission after Pavel Datsyuk's scored with 11 seconds remaining in the second period.
Despite the loss, Florida remained in first in the Atlantic Division regardless of what happened in Tampa Bay or Boston's late games out west.
"We should have taken care of business,'' Gallant said, "but we didn't."
The Red Wings extended their lead on Philadelphia for the last playoff spot in the Eastern Conference to three points.
Detroit is trying to extend its postseason streak to 25 consecutive seasons -- the longest such active run in North American professional sports.
-- Florida defenseman Jakub Kindl played against the Red Wings for the first time in his career. The Panthers acquired the 29-year-old in a deal with Detroit on Feb. 27.
Kindl was a first-round pick of the Red Wings in 2005 and played 273 games for Detroit before heading to the Panthers before the trade deadline.
"I've only been in one organization all my career," Kindl told reporters following Florida's morning skate.
-- Gallant said Saturday morning that Derek MacKenzie and Erik Gudbranson would not travel with the team on its upcoming road trip.
Both are thought to have a fractured foot after blocking shots in different games over the past week.
-- Justin Abdelkader, who concussed Barkov with an unpenalized hit last month in Detroit, was hit hard by Dmitry Kulikov in the second period and then fought Jonathan Huberdeau in the third.
The fight was Huberdeau's second in his NHL career; Abdelkader has been in 18 per hockeyfights.com.