WELCOME BACK: Florida Panthers celebrate 1996 with 20th reunion in Sunrise 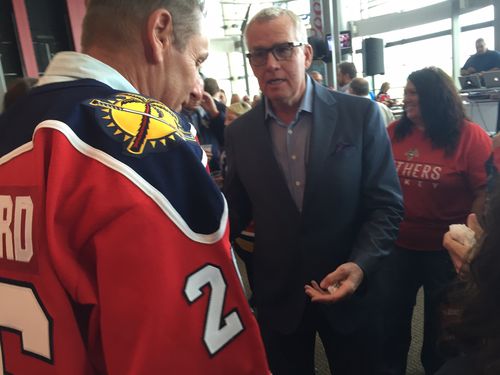 TWITTER: @GeorgeRichards
At first glance, Saturday night looked like hockey's version of a 20th high school reunion.
Folks mingled around the bar, munching on hors d'oeuvres while a DJ spun some tunes.
Only this was the 20th anniversary reunion of the Florida Panthers team which surprised hockey -- and South Florida -- by beating Boston, Philadelphia and Pittsburgh in the playoffs en route to the Stanley Cup Finals in just the team's third year of existence.
"The buzz was real," Ed Jovanovski said of the experience. "We put hockey on the map down here. We were rock stars."
The story of the 1996 Panthers may not have the happiest of endings -- Florida was swept out of the Finals by Colorado -- yet that has never tempered the fondness fans have for this team.
Nor has losing to the Patrick Roy-led Avalanche challenged the closeness of this group.
"We built a real identity with the fans, a bunch of guys who laid it out on the ice every night,'' said goalie John Vanbiesbrouck, who stopped 93 percent of shots faced in 22 playoff games that year.
"We didn't win the Stanley Cup but we won the hearts of the fans and that's what matters most."
Said Doug MacLean, coach of the Panthers from 1996-98: "You think back and it's nothing but great memories. There isn't a bad one. It's hard to believe. To see all these guys back here is really special. What a team that was. You talk about character and team, that's what they were all about.''
Most of the players from Florida's 1996 Eastern Conference championship team made it to South Florida from general manager Bryan Murray to equipment manager Scott Tinkler.
Not only was captain Brian Skrudland back after being surprisingly let go by the team as its director of player personnel this past summer -- "I wouldn't miss this, but I miss this," Skrudland said -- so, too, was Scott Mellanby now assistant GM of the Montreal Canadiens.
It was Vanbiesbrouck's quick thinking when talking to reporters after Florida's 4-3 win over Calgary in the home opener that eventually sparked a rubber rat tossing craze which was the talk of the playoffs and still done 20 years later.
"It was a 'Rat Trick','' Vanbiesbrouck said in 1995 after Mellanby killed a lost rat in Florida's pregame locker room at Miami Arena then scored twice on the ice against the Flames. 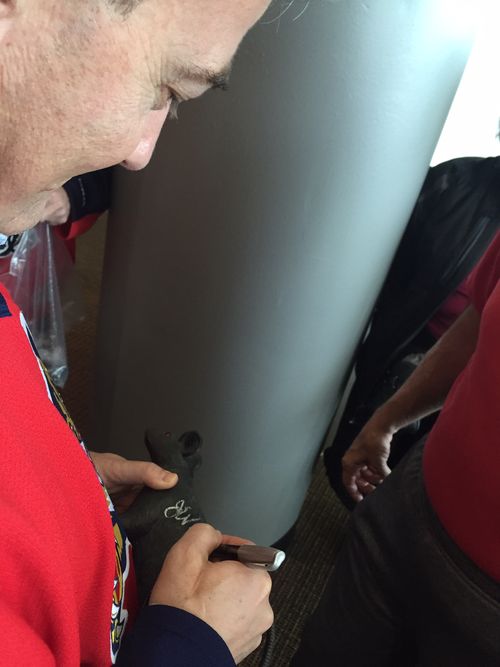 "I had no idea that night it would turn into what it did," Mellanby said Saturday night. "John really got it out there with his quote in the paper. It's amazing and cool that people still embrace it. It's great to be part of this history and is something I'll never forget.''
The 1996 Panthers did more than just win three playoff rounds -- the organization hasn't won a postseason series since -- but may have saved hockey in South Florida.
Before going on their run, the Panthers were rumored to be in relocation talks with Nashville.
As the Panthers picked up momentum and rabid followers -- you could buy cakes in the shape of a giant rat at Publix -- Broward County agreed to build an arena for the team with the Sunrise location settled on during the Cup Finals.
The BB&T Center will celebrate its 20th anniversary during Florida's 2018-19 season.
The Panthers, now with an infusion of tourist tax money and a solid young core of players, expect to be here way past that season.
"A lot of people have criticized this fan base, but look around, it's alive and well,'' Vanbiesbrouck said.
"We're getting to the promisedland here. They're strong in goal, strong on defense, great coaching staff. It's fun and makes us watch more closely. I think this team can go deep in the playoffs.''
-- Jaromir Jagr, 44, lost to the Panthers in the 1996 Eastern Conference finals as a member of the Penguins.
Friday, he joked that the Panthers had an edge when all the rats would hit the ice because "they were out of shape so when the fans threw the rats, they got five minutes off to rest. The rats saved them.''
Skrudland said Jagr was just jealous the practice doesn't continue today. The NHL outlawed the practice starting in the 1996-97 season because of the delay caused to clean the ice after goals. Fans now toss 'victory rats' after wins.
"He would know about needing that [break] today,'' Skrudland said with a smile.
-- Based on the reaction when his name was announced during a pregame video, Philadelphia rookie defenseman Shayne Gostisbehere had quite a following Saturday night.
The first South Florida born-and-bred NHL player, Gostisbehere was playing in his first game against his hometown Panthers.
Ray Sheppard, part of the Panthers' 1996 reunion, coached Gostisbehere during his formative years in Coral Springs and was beaming Saturday when the topic was brought up.
Gostisbehere, despite not being called up from the minors until a month into the season, is now considered a leading candidate for the NHL's rookie of the year honors.
"I was fortunate to coach him at a young ages and I said then that this kid had something special,'' Sheppard said. "I thought he might get a crack at it, even then. I'm so proud of him. He's a great kid who worked hard and deserves everything he gets. It's fantastic and I'm so happy to be here to see him.''
-- The Flyers selected Gostisbehere in the third round with the 78th overall pick of the 2012 draft held in Pittsburgh with a selection it had acquired from the Panthers in 2011 for winger Kris Versteeg.
Even if Florida wanted to take Gostisbehere in the second round, it didn't have a pick that year as it had also gone to Philadelphia (and later to Tampa Bay) in the Versteeg deal.
"We knew all about him," Bill Torrey said with a grin.
-- Rookie Kyle Rau was back in the lineup Saturday after being scratched Thursday against Ottawa. Florida sat Shawn Thornton Saturday and Quinton Howden for the second consecutive game. Rau was sent back to AHL Portland on Sunday.