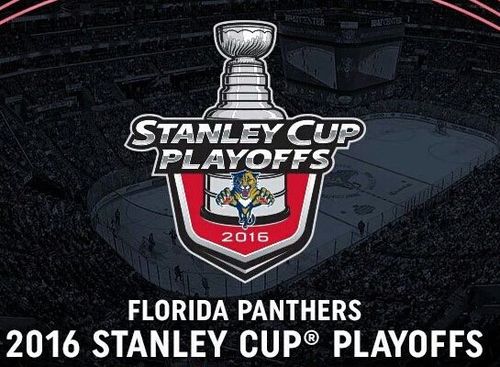 TWITTER: @GeorgeRichards
BUFFALO, N.Y.
When the Panthers' Eastern Airlines charter took off from Fort Lauderdale on Sunday afternoon headed on the final road trip of the regular season, the team was sitting in first place in the Atlantic Division.
By the time they landed in chilly Toronto, the Panthers were officially a playoff team.
By virtue of Boston's 6-4 loss in Chicago on Sunday afternoon, the Panthers clinched their fifth postseason appearance in franchise history.
This is Florida's first trip to the playoffs since winning the Southeast Division in 2012 and just their third postseason appearance since 1997.
With four games left, the Panthers can now focus on winning the Atlantic Division title.
"The first goal is to make the playoffs and the second goal is tto finish as high as you can,'' coach Gerard Gallant said late Saturday night.
"We're still in a battle with Tampa Bay so we have to keep battling, keep going. When you're close, you have to set goals. We want to make the playoffs and the next goal is to finish in first place."
As is usually the case for the Panthers, even clinching a playoff spot didn't come without just a little stress.
Florida could have clinched on Saturday night only Detroit beat the host Maple Leafs to keep the Panthers outside of the postseason for another day.
When the Panthers left South Florida on Sunday, the Boston-Chicago game had just gotten underway.
The Panthers were in the air as the Blackhawks jumped to a 6-0 lead only to see the Bruins rally and make it a game with 10 minutes remaining.
Of course, the Panthers knew after rallying to beat the Canadiens on Saturday that they were a virtual lock for the playoffs. 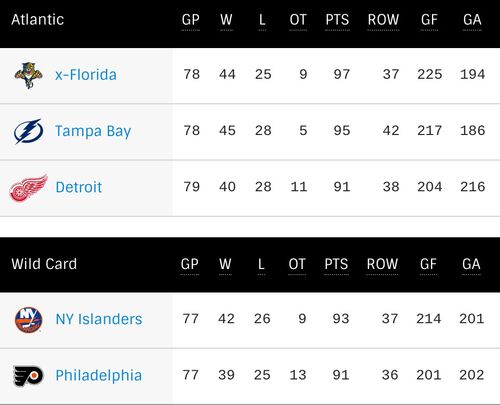 With four games remaining in the regular season -- three in Canada this week -- Florida's focus is now staying atop its division and winning just the second divisional title in franchise history.
The Panthers continue to lead Tampa Bay by two points in the Atlantic and both have four games (eight points) remaining. Although the Lightning hold the tiebreaker if the two teams end the season tied, Tampa Bay has a more challenging schedule and is now without leading scorer Steven Stamkos due and top defenseman Anton Stralman due to injury.
Florida visits Toronto, which upset the Panthers in Sunrise last week, as well as Montreal and Ottawa this week before returning home for its regular season finale Saturday against Carolina.
Regardless of what happens in the battle with the Lightning for the top spot in the division, Florida will likely hold a top seed when the playoffs start next week.
The Panthers are expected to open their first-round series at BB&T Center next Thursday against an opponent to be determined.
How Florida will fare -- the Panthers haven't won a playoff series since beating Jaromir Jagr's Pittsburgh Penguins in the 1996 Eastern Conference finals -- is also to be determined.
"There are so many doubters when it comes to our team, and that's fine with us,'' Jagr said Saturday night.
-- The Panthers expect quite a challenge on this final road trip of the regular season with Toronto and Montreal both showing the Panthers they haven't cashed things in just yet.
Last week, Toronto beat the Panthers 5-2 at BB&T Center while the Canadiens held a 3-0 lead midway through the second period before the Panthers came back to win 4-3.
"We're going to play a very dangerous team in Toronto," Jagr said. "They may not have a lot of points, but they're a different team with all their young guys. They play well and have nothing to lose. All the young guys want to show their coaches they want to play next year. Plus, they are fresh and excited. ... I would rather play a team with a lot of older guys who know they're not making the playoffs."
-- The Panthers set a franchise record with their 44th win of the season on Saturday. With a win Monday in Toronto, Florida would get its 99th point which would also set the franchise mark.
"It's great but again, you look at that in the summertime when we're done," Gallant said. "Right now it's just about getting ready for Toronto and trying to get another two points."
Monday: Panthers at Maple Leafs
When, where: 7:30 p.m.; Air Canada Center, Toronto
TV/Radio: FSFL; WQAM 560, WFTL 850
Series: Toronto leads 35-32-7
Scouting report: The Panthers are 2-1 against Toronto this season and have won eight of their past 11 against the Leafs after losing 5-2 at home last week. The Leafs lost to Buffalo and Detroit since beating the Panthers.