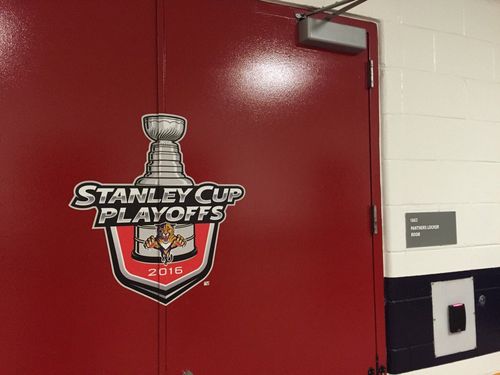 DAY FOUR, GAME 1 -- Thursday, April 14
TWITTER: @GeorgeRichards
SUNRISE
With so many players making their postseason debut for the Panthers (eight of the 20 players dressed tonight are in their first playoff game), there's bound to be some jitters.
For third-line center Rocco Grimaldi, being in these playoffs must feel a little like playing with house money.
He wasn't supposed to be here, yet here he is.
And he's making the most of it.
Just a few weeks ago, the NHL Stanley Cup playoffs couldn't have been on his mind.
The AHL Calder Cup playoffs, sure; the NHL postseason, no.
"I was focused on being in the starting lineup in the 'A'," Grimaldi said. "We were in a playoff chase there and I get here and we're in a division chase. I didn't expect this. It's pretty cool."
When Vincent Trocheck got hurt, however, Grimaldi got the call. He's centered postseason veterans Teddy Purcell and Jiri Hudler since and three have played pretty well.
"I think those three have been playing very well," coach Gerard Gallant said. "Rocco has played a handful of games, but the past three or four games they've played together, they've shown great chemistry together. They mix well, have some offensive ability and are quick. We really like that combination."
It appeared Grimaldi was out of the Panthers plans this season as he was sent back to AHL Portland before Christmas and never cam back up. It's not like the Panthers weren't recalling forwards, either.
When he did get the call last month, Grimaldi has taken the opportunity and taken off with it. When Trocheck comes back, this run may be over but only because there doesn't seem to be anywhere else to play him.
"I can only focus on one shift at a time, one game at a time," Grimaldi said. "I don't know what could happen as far a lineup changes go, so, I'm not worried about it. I know I'm going to play tonight and that's all I can control. It's an opportunity for me to help our team win."
So far, Grimaldi has made his best case that he is valuable to the Panthers and deserves to be a part of this.
"I've had numerous opportunities here this year and last year and I think this one has been my best,'' he said. "I feel more confident, more comfortable. Obviously playing with [Hudler and Purcell] has helped me out, make me feel comfortable which is great. I can't be satisfied with the few games I've played; I have to move forward in the playoffs.''
-- Garrett Wilson gets the call tonight on the fourth line with Derek MacKenzie and Shawn Thornton as Greg McKegg and Quinton Howden are scratched. 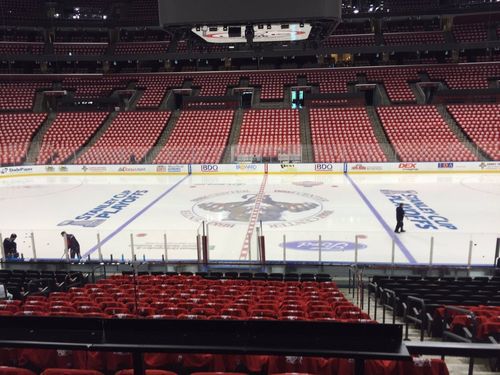 Many times we've seen surprise heroes pop up in the postseason. Wilson would be the biggest surprise hero if he were to pop in a goal or two at the right time in these playoffs.
It sure would be cool if Wilson -- the veteran of a grand total of 34 NHL games -- got his first NHL goal (or even his first NHL point) in the playoffs.
"This is what you play for, this is the real season,'' Wilson said. "I probably won't get my pregame nap in today. I'm just ready to go. On the fourth line, we try to play playoff-style hockey all season so this shouldn't be anything new to us. We have to do what we've been doing all year; get in on the forecheck, finish our checks and be physical. That's our gameplan. We have a job to do and be physical.''
-- Injured defenseman Steven Kampfer skated before the morning workout then joined in during the later stages. Kampfer injured his ankle in Ottawa last week and was thought to be out for at least the first four games.
Depending on how things go, however, it's believed Kampfer may be available for Game 3 on Sunday.
"It's too early; he's still day-to-day," Gallant said. "He won't play today or tomorrow, but after that, we'll see where he is. Today was the first day on the ice so that's a good thing for him."
-- No news on Vincent Trocheck today and I did not see him skate.
-- The Panthers get Erik Gudbranson back after he missed the final three games of the season.
"He's a big, physical guy who plays a shutdown role for us," Gallant said. "He plays against the top players on the other team, blocks a lot of shots, kills a lot of penalties, does a real good job for us. Guddy has taken a big step for our team this year. He's very confident, moves the puck real well and is a big part of our blueline."
Said Gudbranson: "It’s fun, it’s what you work hard for all season long. This is where we want to be. This is what hockey really is. You’re going for the Cup right now, we have a shot at it. We’ve worked so hard to get here and it’s a very fun feeling to be here but obviously our level of focus needs to be there and it is there in our group and that will get us through these next couple games." -- The BB&T Center looked more red than usual this morning as every seat was decorated with a commemorative t-shirt.
If you have a ticket today, go ahead and take it home with you. That's what it's there for.
-- Speaking of decorating, the Panthers changed up some things in the rafters.
Not only did they move the US, Canadian and Florida flags to the opposite side of the arena, but they brought back original banners from the 1993-94 expansion season, the 1996 Eastern Conference championship banner as well as the Bill Torrey '93' banner which first went up a few years back.
A few years back, the Panthers brought in new banners which all looked the same. Now there's a little color and character back in the rafters.

"We have to celebrate the history of the team,'' Peter Luukko said. "I was there [with the 1996 Flyers] and was a victim of the rats. Lets bring that stuff back; it's really cool to celebrate and hang those banners.
"There were some really good players who came through here and some really lean years, too. It was tough. But we'll put that behind us and lets celebrate this team that has been here, had some success, and embrace it.''
Wrote Doug Cifu (@dougielarge) on Twitter: "Our guys found them in a storage room! Working on team banners next...."
-- One guy who isn't growing a playoff beard is Gallant. He had some gruff going yesterday, but it was gone this morning.
"Not for the coach," he said. "As a player, I liked the playoff beard but now it itches too much and I don't like it. That's a player thing."
-- Jaromir Jagr was told he had the option to speak before or after the game today. He took the early session. "I don't know how bad I'm going to feel after this one," he joked.
Here are some Jagr excerpts:
(*) On the youth: "We have a lot of young guys who have never been to the playoffs so we'll see how we handle it. On one side, we have experience; on the other, we don't. We'll have to wait and see."
(*) Can you share your experiences?: "No matter what you say, they have to go through it. Everyone knows."
(*) Worried about the Islanders zeroing in on you?: "I don't know why they should look at me. I'm 50 years old, so ... "
-- Roberto Luongo is big into daily fantasy games but said he didn't select Kobe Bryant last night because he's done with basketball.
"It's baseball season," Luongo said.
-- Gallant had a lengthy pregame press conference in the newly spiffed up media room at the arena.
Here are some excerpts of that:
(*) On their youth: "We've talked about our team being young for the past few years. We know what we've got with our hockey team. Our young players have a lot of experience -- not playoff experience -- but experience on the power play, penalty kill and playing big minutes for this team. It's not an issue for me at all."
(*) On the compressed schedule: "We had a lot of back-to-backs the past few years and I really like them, to be honest. Our team has had good success in them, we play good hockey back-to-back. Obviously you wonder about Jagr in back-to-back games, playing three in four days, but he's had no issues. He's played great games in back-to-backs. I like it; in four days, we'll have three games played in this series and hopefully we play well and we'll be on top. But it's going to be a battle. For me it's no issue."
(*) On the goalies: "I don't look at the other team's goalies. We worry about our goalies and our goaltending has been strong all season long. Louie is a real experienced guy and has played well; Monty, when called upon, has 12 big wins for us as the backup. They are strong in net as well, but Louie and Monty, to me, are a very strong pair."
-- Peter Luukko on the rat giveaway which ended up leading to a pair of delay of game penalties on the Panthers:
"We're here to have fun,'' he said. "Yeah, we probably shouldn't be giving out 10,000 rats, but, wasn't that a ball? Thank God we won the game or the big guy would have killed me. It's a fun league here; we can't take ourselves too seriously. Are we going to do it again? No. We'll find something else to do.''
-- Islanders coach Jack Capuano spoke on a variety of subjects as well.
(*) On why Jagr is so dangerous:
“Well number one, it’s experience. He’s played with some great players he’s won a lot of hockey games. Number two, he brings great leadership to that hockey club, they’ve got good young talented players. Number three, is his size. When you play against a player like Jaromir Jagr you know he’s going to have the puck on his stick. It’s how you defend him, that’s the big thing. As good as he protects the puck, we just have to make sure we limit his time and space, the best we can. He’s got a long stick, a great shot, he does a lot of good things and he’s a player that our guys will obviously be well aware of when he’s on the ice.”
(*) On the schedule of the series
“I don’t think it has too much of an impact, we play a lot of back-to-backs throughout [the season]. I don’t look at the schedule, you never want to look ahead, obviously just try to focus on tonight. I think the only impact for us as we move forward if you play a lot of back-to-backs, is your lineup and your goaltending situation and that’s something we’ll address as we move forward.”
-- Isles' forward Matt Martin said although the Panthers winning the Atlantic may have been a surprise, this is a strong team they're facing in the opening round.
"I think they’re very talented especially with Tampa being as strong as they were last year, with the teams on that side, I’m sure a lot of people didn’t think they would win the division," Martin said.
"They’re a strong team; they’ve got great goaltending, great defensemen and really good forwards. There’s no weakness to their team. It’s going to be a big battle, they’re at the top of the standings for a reason and they belong there."