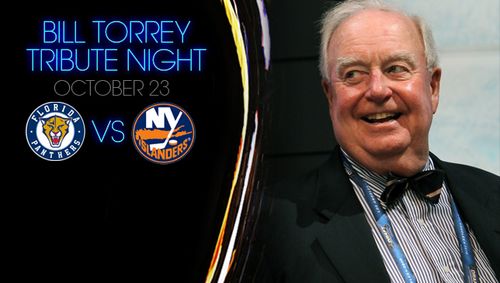 DAY TWO -- Tuesday, April 12
TWITTER: @GeorgeRichards
CORAL SPRINGS
Bill Torrey, the founding father of the Panthers and Islanders, spoke for a bit today and once again reiterated his rooting interest remains with the Panthers.
Sure, Torrey -- who built the Islanders from an expansion team to four-time Stanley Cup champ before being run off Long Island in the early 1990s -- still cares about the Islanders but "that's ancient history," he said.
He has plenty of friends and family members and probably follows them as closely as anyone.
"I still have three sons who live or work on the Island and I have 10 grandchildren and some of them root for the Islanders and some of them root for me," Torrey said. "But I haven't taken a poll so I don't know where I stand."
The Panthers, no doubt, are a bit closer to his heart these days and have been for a long, long time.
"Let's make it clear,'' Torrey said. "I know where my allegiances are and have been for a good many years. No doubt about that.'' 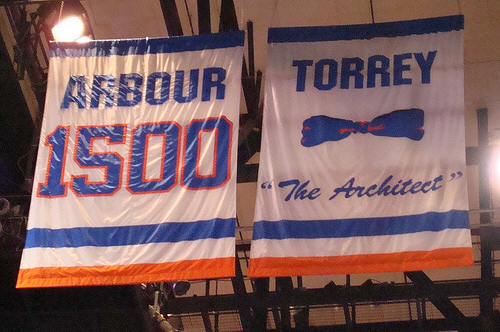 And what about the Islanders move from Long Island this year to Barclays Center?
"Brooklyn means nothing to me," Torrey said, "other than I used to be a Dodger fan."
Torrey went on to say he would rather see the Islanders and Panthers in the east finals meaning both won a few series before facing each other.
Florida hasn't won a playoff series since 1996; the Islanders haven't advanced since 1993.
"I want to win a series and that's the most important thing," he said. "They've had some rough times; we both have. But, once the puck drops and this series starts, you don't think about what has been. You think about today and tomorrow."
-- Jaromir Jagr was mostly business today -- and not just 'business in the front and party in the back' -- as his hair continues to grow out, wild and free.
Although Jagr joked to reporters about how good he was killing penalties "the last time I did it in 1996" he was mostly in an analytical mood as he sat down at his locker stall and did about 10 minutes with the large media throng at the IceDen. 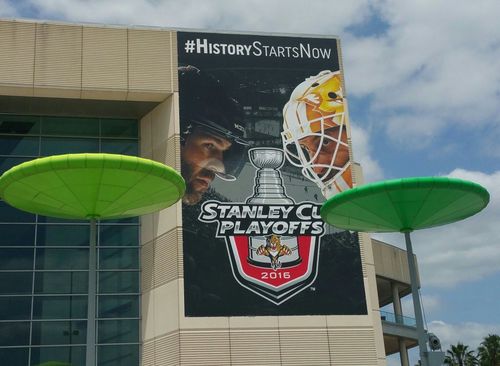 Here are some excerpts (video will be up online later):
(*) "We've worked all year to get the playoffs here. Now we have a chance to do something."
(*) On losing to Isles in 1993: "I remember that series; it was a long time ago but I saw some highlights lately. That's what the playoffs are about. People, the media, thinks it's easy but it's not. It can go the other way. That's why it's so exciting."
(*) On comparing playoff run with Boston to being with Florida all season: "It is different, no question about it. We made two, three trades before the season ended to make our team stronger. But I was here the whole season, all 80 games or something. We were playing to make the playoffs and now a new season starts."
(*) On winning the Cup with Pens as a youngster: "I don'r really remember it. When I was with Pittsburgh, we made the playoffs every year. I played a lot of playoff games. It's a different season, it's 0-0. When it's the top seed playing the eighth seed, it's still very close."
(*) On the cramped schedule: "It gives an advantage to the team which wins the first one. It always gives you the confidence when you win the first one, especially when you don't have a day to rest and think about it. The momentum helps the team that wins."
(*) On home ice: "We'll have to see. That's why you play for all year long but we'll see how we handle it especially guys who haven't played in the playoffs. They may be a little nervous for whatever reason. We should just play the same way, not make a big deal about it."
(*) On playing Thursday: "After Thursday, things are going to go by real quick. We're not going to have much time to think about it or react if something goes wrong. We just need to relax and if something goes wrong, forget about it."
(*) On Barkov's confidence: "He's always been like that since I've been here. He's never too high or too low. We just have to wait and see. There are a lot of first playoff games for a lot of players. We'll just wait and see."
-- Nice plane, Bernie Sanders... 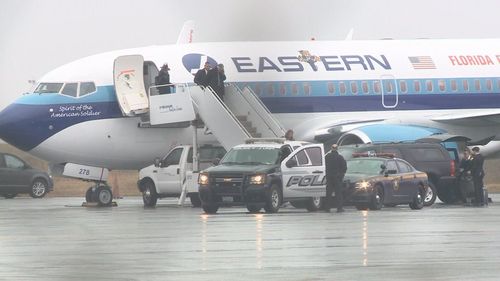 -- Erik Gudbranson was back at practice for a second consecutive day and is a go for Thursday.
-- Gudbranson, whom many think is being groomed to be the Panthers' captain one day, handled his media day as well as he ever had today as he espoused on a number of topics.
(*) "Any playoff atmosphere is pretty incredible but obviously with the struggles we've had over the past couple of years, this is going to be a lot of fun. We all appreciate it, but especially those of us who have been here for all those years. To see that building full .. There's going to be a lot of excitement."
(*) On differences from 2012 to 2016 team: "I think this is a better team, I really do. We had a great team then, but we can come at you in waves with this group. We're really solid defensively, our goaltending is phenomenal. Obviously, on the attack, we're playing the right way. Generally, we're a better team and there's so much character here. That's going to have to come out in the playoffs. ...
"There's a different confidence we have. We wanted to break the streak of not making the playoffs back then and we did. And we felt that was a successful season, a step in the right direction.
"This year, guys want to win it all. It's that simple. Guys want to go to the end. That's the biggest focus."
(*) On the intensity of coming back after missing past three games: "It's all muscle memory. At this time of year, you rely on your teammates to make you feel comfortable on the ice. That's the beauty of our team. We have a good group for that."
-- Vincent Trocheck and Stephen Kampfer were both spotted again today in walking boots -- with Kampfer having some extra contraption wrapped around his ankle. Neither are expected to be ready for the start of the series.
-- The play of Rocco Grimaldi has definitely softened the blow of losing Trocheck for an extended period of time as Grimaldi has taken this latest opportunity with the Panthers and flat out sprinted with it.
Passed over the past few call-ups, it appeared Grimaldi may have fallen out of favor with the Florida brass. That doesn't appear to be true any more.
"Every time we bring one of those guys up they help us a lot and Rocco has played real well,'' coach Gerard Gallant said. "He's getting chances and playing well.''
-- Gallant said he's gearing up to watch the start of the playoffs Wednesday, especially the Tampa Bay-Detroit series.
The start of the playoffs do seem a little more exciting this year what with the Panthers in them and all.
"Definitely," Gallant said.
-- "We've been able to heal up a few bumps and bruises like any other team," Gallant said regarding this little break before things break loose. "Overall, the guys feel good. We had a real good practice, the guys had a lot of jump. They're getting excited."
-- Gallant on 'newcomers' to following the Panthers: "We're a different team, we've really built something here the past two years. We have a chance to beat anyone; if we play well, we can beat anyone. We'll play our best hockey. We have an exciting team, a hard-working team."
-- Derek MacKenzie said "it's been nice getting a few extra days of rest we're not used to having. But we're anxious for Thursday night. We're ready to go."
-- Video from Jagr and Gallant will be up on the Miami Herald video player and embedded in today's main story.
I will link both later either through my Twitter feed -- it's free to follow -- and my On Frozen Pond Facebook page (which is free to like).
My sincere appreciation goes out to all of you who already follow and/or like me on those platforms if not personally.
It's nice to be liked.
And thanks to those who also check out all the stories and watch the videos.