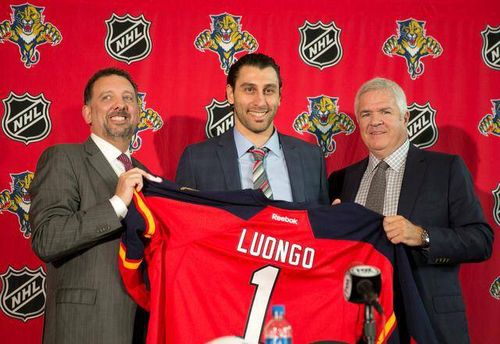 DAY THREE -- Wednesday, April 13
TWITTER: @GeorgeRichards
CORAL SPRINGS
Goalie Roberto Luongo's biggest postseason moment came five years ago when the Vancouver Canucks held a 3-2 lead going into Boston for Game 6.
The Canucks were on the verge of winning the Stanley Cup yet didn't win another game.
Since Game 5 of that series, Luongo hasn't won a playoff game personally.
When the Panthers kick off their series Thursday against the Islanders, all eyes will be on Luongo. He's looking forward to the challenge.
"It’s fun, it’s exciting," Luongo said. "This is my first go around with the Panthers, so it’s something that I have been waiting for, for quite some time and I am excited to be back playing in the post season and trying to have another go at it here."
Many people chided Luongo when he accepted the deal back to Florida in 2014 with some saying he simply came back to the Sunshine State to retire.
Both he and Dale Tallon refuted that kind of talk at the time and Luongo's work on the ice spoke volumes to his dedication to his craft and hunger to win.
“I’m glad we are at the point we are right now, but that being said, there is still a lot of work to be done so right now I don’t really want to reflect on anything but tomorrow night," Luongo said.
"That’s where my focus is at and if you talk to any guy in this locker room we are all pretty much on the same page, we want to put all of our energy into coming into the rink tomorrow and playing a full 60 minutes if not more to try to get that first win.”
Laser focus. That's what Luongo says he needs and appears to have.
"I’m really just focused on what I need to do to be at the top of my game going into tomorrow night," he said. "I don’t try to read into all the narratives that people throw out there, but for me I’m just excited and want to have fun and enjoy it.”
When I asked if he felt like he was at his best right now -- he looked pretty darned sharp against Carolina -- he said. "I have been feeling really good the last few games and I have had a good week of practice.
"Obviously there is good energy going around right now with knowing what is right around the corner and it’s a matter of making sure it all comes together for tomorrow night."
Said coach Gerard Gallant: "Obviously, Lou wants to win the Cup like everyone wants to win a Cup, so getting in the playoffs was a big goal of ours and we accomplished that.
"Now it’s about winning and knowing you got a chance to beat any team in the league if you play well, I think is the biggest thing. He’s not getting any younger and he wants to play as well as he can, but that’s all the guys. All those guys want to win a Cup, but first they have to win a playoff game and then a playoff series. You can’t look down the road and say, ‘well in two months we are going to be Stanley Cup champions’."

-- Tuesday we spoke with Islanders and Panthers architect Bill Torrey and Wednesday I cornered their former captain Denis Potvin to talk a little bit about conflicted feelings.
Potvin, of course, captained the Islanders to four Stanley Cup championships back in the 1980s, but has pretty much worked for the Panthers on the television side of things since 1993.
With the team moving to Brooklyn, Potvin says things just don't feel the same if this series had been played on Long Island at the Coliseum.
"It's just not going to be the same," Potvin said. "I am in a way very happy this is going to be in Brooklyn and not in the old Coliseum -- Fort Neverlose.
"I think the emotional strain would have been too much on me, just seeing the banners, feeling the building, having the fans all there. The Coliseum would have made things more difficult on me.
"Brooklyn just isn't the same as the Coliseum."
Potvin also had this to say about Brooklyn:
"Well, you can't ask me the question 'what's it like to go home, Denis?' I'm not going home. I'm going to New York to cover the modern-day New York Islanders. It will make this a little easier on Bill and myself because we both love the Islanders, we lived our whole lives through that organization. That doesn't change. If it wasn't for this, I would probably want the Islanders to win. But I don't. I want the Panthers to win. That's just the way we are." 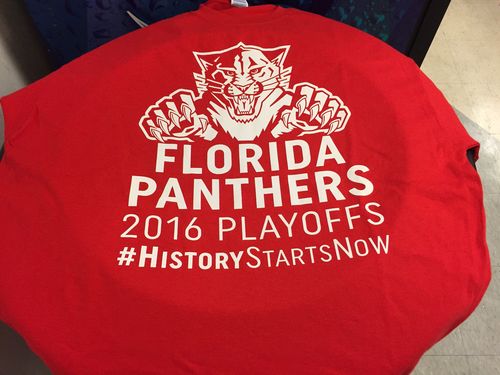 -- All attending Thusday's Game 1 will receive a red commemorative t-shirt. Here's a picture of it. That's it.
-- Gallant on the unknown of starting a series and what the future may hold:
“They are a good hockey team and it should be a good battle out there and they got some top players and have played a real good brand of hockey all season long. Like I said before, any team that makes the playoffs, anybody can win and beat anybody and it’s a matter of who can execute and who is going to play well.”
-- Aaron Ekblad is one of eight players expected to make their NHL postseason debut on Thursday. Nervous?
"Every night you kind of go to bed thinking about it, you wake up in the morning and think about it, you come to the rink and think about it," Ekblad said Wednesday.
"It’s really exciting and an anxious time for everyone and we obviously don’t want to grip our sticks too tight and kind of be relaxed and be ready and prepared."
-- Ekblad used to joke about all the milestones reached during his rookie year, but this is definitely a milestone moment. And he knows it.
"It’s every players dream to win a Stanley Cup," he said, "so obviously we are here to do everything we can to win hockey games and through all the things we have gone through this year and the milestones you talk about, it’s really exciting to be here in this moment."