« Welcome Back to the Pond | Main | SAYING GOODBYE: Both Erik Gudbranson and Dmitry Kulikov surprised by trades » 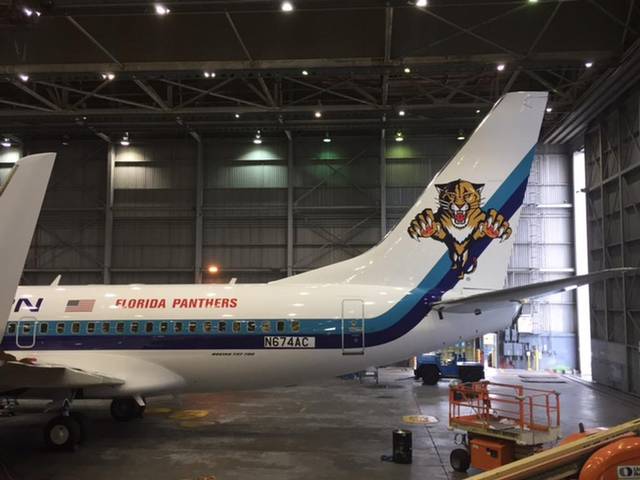 The Florida Panthers will have a new plane next year, the CEO of Eastern Airlines said Tuesday, which is a good thing.

The Panthers' plane is a bit busy these days.

After a historic season of ferrying South Florida’s hockey team across North America, the Florida Panthers’ jet has a new look — and a new captain.

Now dubbed ‘Air Trump Two,’ the Eastern Airlines 737 has been stripped of its hockey logos and re-branded as the second aircraft in Donald Trump’s presidential campaign.

With ‘Trump Pence’ and ‘Make America Great Again’ painted on its fuselage and a large American flag on the tail (where Florida’s leaping cat logo once resided), the plane is expected to be used exclusively by vice presidential candidate Mike Pence, his staff and media covering his side of the Republican presidential campaign as he travels from coast to coast.

The aircraft had previously been christened the ‘Spirit of the American Soldier.’

In a story on the plane, dailymail.com wrote that Pence will take over the aircraft Wednesday as he and Trump split up with separate itineraries.

Trump is scheduled to speak in Doral on Wednesday morning; Pence tweeted he would be in Wisconsin.

The Panthers took ownership of their own aircraft last season, one in which the team set franchise records for wins (47) and points (103) as it won the NHL’s Atlantic Division title.

The team plane made a special trip to Nashville this season as it carried a team-record three players (Jaromir Jagr, Roberto Luongo and Aaron Ekblad) and coach Gerard Gallant to the 2016 NHL All-Star Game.

According to Eastern CEO Ed Wegel, the Panthers will not be using this plane next season but will be taking over another currently being used by baseball’s San Francisco Giants.

The new Eastern Airlines, which Florida Panthers’ owner Vinnie Viola has a controlling interest in, is a fledgling air charter company based in Miami.

The old Eastern went bankrupt and folded in 1991 after over 60 years in business.

The new company owns not only the Eastern name, but its intellectual property as well — including the logos, color scheme and old slogans such as “Number One to the Sun” and “Wings of Man.”

This past season, when the Panthers were at home or had a few days between road games, Eastern would use the hockey team’s plane for other teams such as college basketball and baseball teams.

Eastern recently signed on to be the official airlines of FIU athletics and flew University of Miami teams around the country last school year.

Before being re-purposed for the Trump campaign, this Eastern jet sported a slick Star Trek paint scheme and hauled top Hollywood execs as well as the stars of the new Star Trek movie to its premier at Comic-Con in San Diego last week.

And this isn’t the first time Eastern Airlines — and the Panthers’ plane in particular — has hosted a high-level politician.

When the Panthers were home for an extended stay in April, Democratic candidate Bernie Sanders took ownership of the plane for a while.

He’s not using it anymore, obviously.