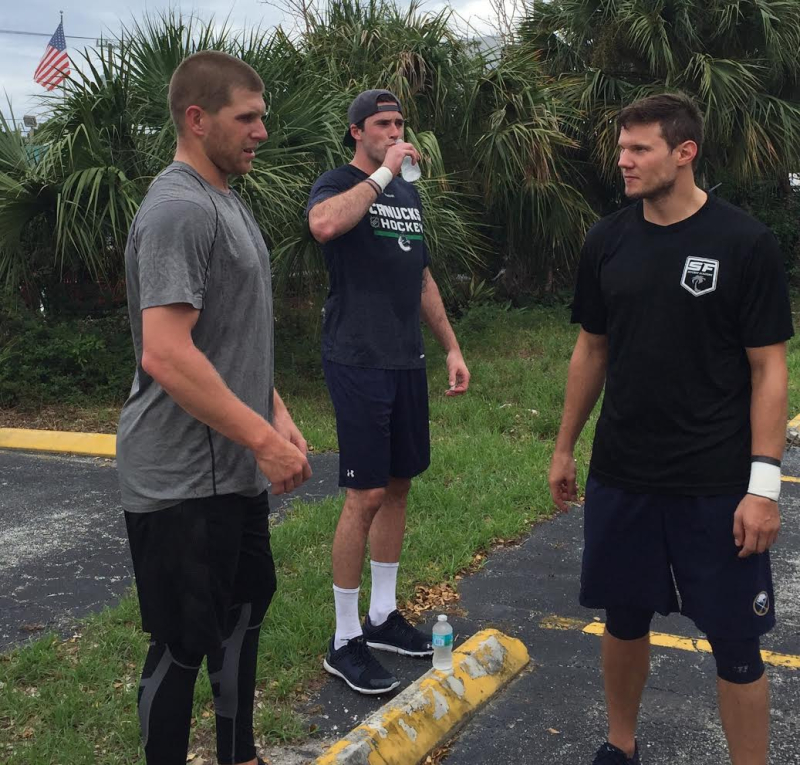 In case you missed it, I ran into Erik Gudbranson and Dmitry Kulikov (as well as Olli Jokinen, Steven Kampfer and Tomas Vokoun) at Jokinen's South Florida Hockey Academy held at Glacier in Lighthouse Point.

Both Gudbranson and Kulikov told me they were surprised to be traded after years with the Florida Panthers. With time, however, both are over the shock and seem ready to move on with their new teams.

Here's the link to my story with some key quotes pulled out.

“I had heard some rumors but was really surprised because I hadn’t heard that Buffalo was one of the teams that wanted me,’’ said Kulikov, who was sent to Buffalo for fellow defenseman Mark Pysyk and a swap of draft picks on the second day of the NHL draft in June.

“I’m excited to change the scenery a little bit, go on to a new team. It felt right for some reason. After being here so many years … There were times I wanted Florida to trade me, then we drafted some good players and the team started to turn around and it was fun, so, at that point, I wanted to stay. But when the trade came, it felt like a good opportunity for me to step up my game.”

“There’s a buzz around hockey here now and I’d like to think that, as part of the Panthers the past few years, we created it,’’ he said. “It’s sort of sad to leave, but hopefully this thing continues to grow and hockey becomes the prominent sport down here.”

“I was surprised about the trade, but Vancouver is a huge hockey market and I’m excited to be going there,” said Gudbranson, sent west for forward Jared McCann.

“This is a team held in pretty high regard. On an individual level you have to be ready to make a difference. I’m excited to keep going this summer, step right in there. It was a shock to be traded, I didn’t see it coming. But it’s a business. I’ll keep going.”

I also have two videos -- one from Gudbranson, the other from Kulikov -- that I think are worth checking out. I did the interview and edited it myself!