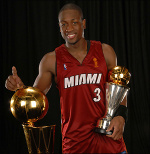 Anyone out there interested in these? Being held in Canada this summer, the worlds were expected to drum up much more interest in North America than in years past.

But is there any interest?

The Panthers have six players -- well, seven if you count Branislav Mezei -- representing five different countries in these games. They kicked off today with Team Canada (with Jay Bouwmeester) dropping Slovenia 5-1.

I plan on talking here about the games because I do have a slight interest in these games. Figure it will grow when they get closer to crowning a champion. Thoughts?

-- The U.S. entry (with Craig Anderson in goal and David Booth flying up the left wing) played Latvia on Friday night, sporting retro jerseys from 1960 design ( I dig 'em). Boston's Tim Thomas got the start over Anderson as the USAers trounced Latvia 4-0.

Dustin Brown, Patrick 'Miami' Kane, Zach Parise and Patrick O'Sullivan all scored for the Americans (not the Amer-I-Can'ts) on Friday night.