Preparing for the Move

Tonight is University of Miami Family Night at Joe Robbie Stadium, something the Marlins have done in the past but tonight takes on a different feel since the Canes football team is moving here come August.

Anyway, little more green mixed in with the orange seats here in Miami Gardens, a lot of UM facility, students and alums taking in the game.

Sebastian the Ibis is down on the field taking photos with Billy the Marlin, a little ironic since these two mascots will be switching venues in the coming years. Sebastian gets to stay, Billy has to move (although I'll believe in Marlins Park at the Orange Bowl when I see the cement being poured. And even then I may be a tad skeptical).

As far as baseball goes, not much change from Friday night. Marlins throwing out the same lineup it did last night, save for pitcher Ricky Nolasco going instead of Mark Hendrickson.

Padres making quite a few changes to the lineup, trying to get something going. The Fathers have lost four of five and 13 of 16. In past five games, Pads have scored 15 runs.

-- Nice run by Big Brown, no? First horse since 1929 to win out of the 20 slot. Definite shame to see Eight Belles (which placed) break both front ankles after the race and have to be euthanized almost immediately. Always hate to see that. 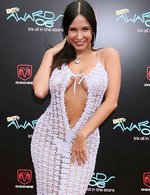 -- Throwing out the first pitch: On Frozen Pond favorite Mayra Veronica (called one of 100 sexiest women by FHM back when FHM was around). Bad pitch, but who cares? The Marlins, I should add, need more Mayra Veronica.

This was not the first time she threw out the first pitch when I covered a Marlins game. Some of you may remember this post from back in the day.

-- Tomorrow should be a good time at the ballpark. Padres' Greg Maddux going for his 350th career victory against the Fish. Start time at 1:10. What else you got going on?

-- For those Marlins fans who enjoy visiting cyberspace, The Herald is about to launch a new blog just for the Marlins. Clark Spencer, Mike Phillips and myself will opine on everything Marlins at Fish Bytes. Coming soon to a neighborhood computer near you.

Should be up and running by the time I cover the Marlins in DC next week. So keep your eyes peeled.

-- Padres lineup doing a bit of damage tonight...three runs for SD in the first two innings...Marlins get two in the first off a Mike Jacobs homer to left...

-- Still 3-2 here in the fourth, Jorge Cantu making a great defensive stop, running over to the founder's box seats behind third to get a Brian Giles popup, then spinning and throwing to a hustling Hanley Ramirez to cover third and get Paul McAnulty trying to tag up. Check SportsCenter for that one....

-- Montreal trying to stave off elimination, leading the Philly Phlyers 3-1 with 7:22 left in the second period... 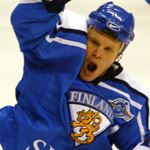 -- And Olli Jokinen gets things going for Finland, his goal gave the Fins a 2-0 lead on Germany and turns out to be the game-winner, Finland dropping the VWs 5-1...

Now, back to your regularly scheduled baseball game...

-- Back to hockey: Former Panther d-man Ruslan Salei (bounced out of playoffs by Red Wings) is going to play in the Worlds, joining Belarus on Monday...

-- Indians/Royals scoreless in the fourth...

-- Oh my: Flyers come all the way back, now lead Habs 5-4 with 3 minutes left. If Bullies when this one, someone in Montreal could get hurt...those fans/crazy drunks are nuts....sure the police horses are out in force in the old city as we speak...

-- Oh my II: The Marlins Manatees just did a routine on the field to 'Peanut Butter Jelly Time.'' No Dancing Banana here...

Before this site turns into 'On Frozen Diamond*' thought I would dedicate today's post to the second round of the NHL playoffs.

Looks like we have some fun matchups. Feel bad for the Capitals (they had plenty of chances to win that one), but good for the Flyers. Think that's going to be a decent series one in which I think the Habs win in 6. Carey Price shutting out the Bs on Monday night was huge. Huuuuuge.

Can't wait to watch the Pens and the Rangers, though, and I'm picking the Blueshirts to win that one in 7. Could go either way, obviously. I love the Pens, you all know this, but I also am a big fan of Henrik Lundqvist. I think he's a money maker and a difference maker. Goalies like him are built for the playoffs. Rangers just have too much going for them right now in my opinion.

Out west, what hockey fan doesn't love a Detroit-Avalanche matchup? That's just good, old fashioned hatred right there. Sure, a lot of the names have changed, but a few haven't. Bad blood always boils the best. I like Detroit there, and I think they need to stick with Osgood for the foreseeable future. Colorado may be the sixth seed, but they are a darned good sixth seed. I could see them winning here as well. Again, another fun series.

Good win for the Sharks on Tuesday, J.R. really coming to play by getting four points in Game 7. Not bad for a guy who text messaged a reporter in Philly this summer to tell him he was retiring, only to come back and sign a one-year deal with the Sharks. Did you see JR after the game last night? You could see him savoring every moment of that deal. That said, I like Dallas to win that one in 7.

-- PS: A total of seven Panthers will be representing their respective countries at the upcoming World Championships starting next week in Canada. David Booth and Craig Anderson will represent the U-S-of-A and Jay Bouwmeester will play for the homestanding Canadians. Others: Olli Jokinen (Finland), Ville Peltonen (Finland), Magnus 'Magnum' Johansson (Sweden), Branislav Mezei (Russia).

(*) Going to be doing a live report from tonight's Miami-FIU baseball game, and will also be doing some Florida Marlins reports when I cover them in May. Gives me something to do. Would have stopped in when I covered horse racing last weekend, but I was too engrossed in my Daily Racing Form to log on. Thanks to Mike and Michele at Gulfstream and Calder for all their help.

-- Also, here is the complete schedule for Round 2. Clip and paste!
2008 EASTERN CONFERENCE SEMIFINALS
SERIES I TIME (ET) #1 Montreal vs. #6 Philadelphia Network