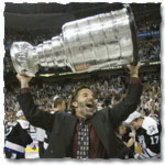 If reports out of Tampa are true, the new ownership group of the Lighting are preparing to clean house, shoving John Tortorella out the door in favor of ESPN commentator and former LA Kings coach Barry Melrose.

Now, I'm as big a Melrose fan as there is, but this is nonsense if it comes true.

If this new ownership group, which appears to be on shaky financial ground before even taking over, comes in and decides Torts' voice has been lost in the room, fine, replace him. But that doesn't appear to be the case. The Lightning weren't a playoff contender last year, but many predicted that to be the case before the season started. This bunch is in rebuild mode right now, and there wasn't much Torts could do to change the downward spiral.

I don't think Barry Melrose, as much fun as he'll be in the media scrums, will make much of a difference despite his reported $2 million per year salary.

I would think the Panthers would love to have Tortorella in house, even though there's talk he doesn't get along with team president Michael Yormark stemming from their days when both worked for the Bolts.

I don't see Tortorella coming south, even if asked. Unless his biggest deal was sticking it to his old team.

Here's the full story from the Tampa Trib