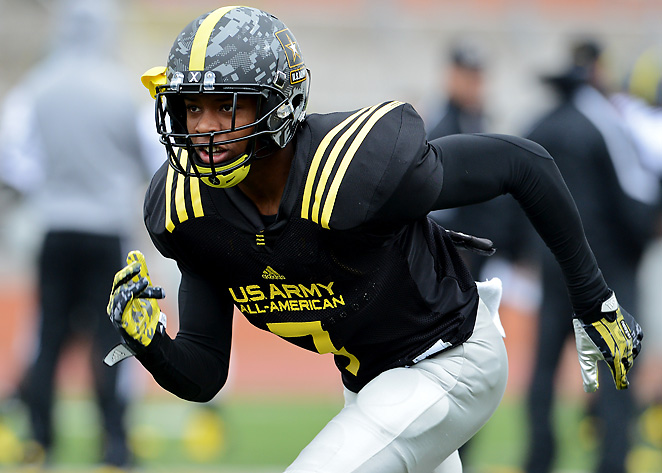 With just over 24 hours left in the recruiting period, coaches are feverishly working the phones, making final pitches to recruits and trying to lock down the last remaining prospects in their 2013 classes.

This year the Seminoles are hoping to close in much the same way, by adding several high profile players in the final hours of national signing day.

It's been a tumultuous couple of months for Jimbo Fisher, he's lost six assistant coaches- including James Coley to rival Miami. But no matter, already on Tuesday morning, a day before NSD, the 'Noles have reportedly flipped a major recruit from USC to FSU and will see their national recruiting ranking take a nice jump as a result of it.

Per SB Nation's Bud Elliott, 5-star cornerback Jalen Ramsey has de-committed from Southern Cal and will sign with FSU tomorrow thanks largely in part to the work of Fisher and new defensive coordinator Jeremy Pruitt.

Pruitt of course made waves when he flipped Demarcus Walker from Alabama to FSU just hours after the BCS National Championship game. The 4-star strongside defensive end is already enrolled at Florida State and will participate in spring practice.

As for Ramsey, he is a 6-0, 190-pound corner from Brentwood Academy in Tennessee. Originally recruited by Tee Martin at USC, he verbally committed back in July but has reportedly been persuaded to switch his commitment to FSU. Ramsey is a 4.5-40 guy who should compete immediately for playing time much as Darby did last season.

He's also the first major piece to fall in what Florida State hopes will be a big week for the program. FSU is still under consideration by several recruits that will announce tomorrow, including South Florida's own Matthew Thomas and Stacy Coley. Both of whom are also being heavily recruited by the University of Miami and former FSU-OC James Coley.

We'll know a lot more at the end of tomorrow, but for now the final recruiting push is off to a good start for Florida State.