Seminoles Improve to 12-0 With 10-4 Win Over Presbyterian 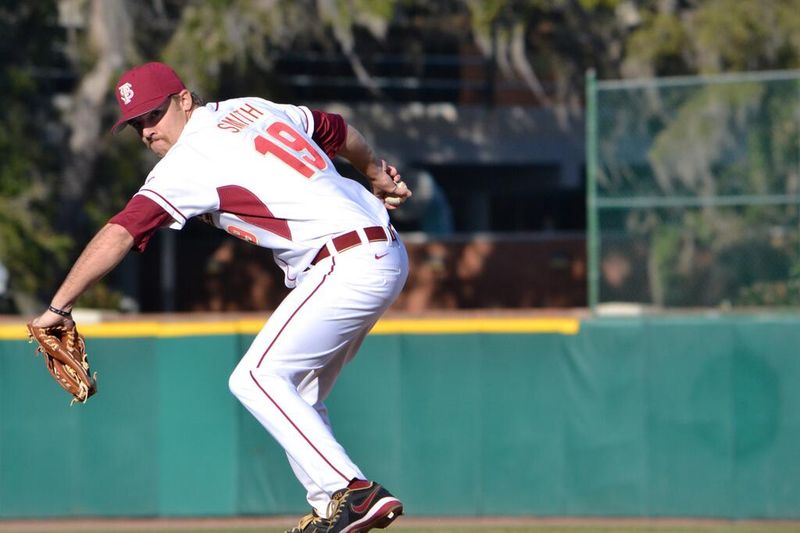 FSU Beat Writer Patrik Nohe is off for the weekend. The following is a press release from Florida State University:

“When you look at the game today, the fact that we won was certainly important,” said head coach Mike Martin. “We are very proud of the way our young men played.  More importantly we were able to get our guys some work.  It was good that we feel like our pitchers are now set and ready to go this weekend as we open conference play against a very good Boston College team.”

Josh Delph led the way for the Seminoles posting career-highs for hits (4) and runs scored (3), while tying a career-high with three RBI.  A night after Stephen McGee registered his first career home run, Delph did the same on Wednesday in the bottom of the third lifting a 1-0 pitch from PC reliever Michael Ricchi over the fence in right for his first round tripper as a Seminole.

“I didn’t think it was gone,” said Delph after hitting his first career home run. “I’ve hit the top of the screen so many times I thought it was going to happen again. When I got it in the air and I heard everyone in the dugout going crazy, I thought there was a chance and then the wind got it so that definitely helped.”

Brett Knief, who started in left field in game two against the Blue Hose, went 3-for-4 with a run scored and an RBI.  It marked his first career multi-hit game in a Seminole uniform.

“Josh has not struggled against lefties,” said Martin. “He’s always been one that stays in there very well.  I learned that last year, so that’s a good sign.  I thought Knief also had some good swings today.”

Jose Brizuela and DJ Stewart both finished the game 2-for-5 with an RBI and a run scored.

Six Seminole pitchers saw action on the mound Wednesday afternoon against Presbyterian with left hander Billy Strode making his first career start.  The Parkland, Fla., native went 1.2 innings allowing a run on two hits as he did not factor into the decision.

“He showed a lot of poise,” said Martin on Strode making his first start. “He got out there and was not intimidated.  He was around the plate and hit his spots. I was very proud of him.”

Gage Smith (2-0) picked up the win as he entered the ball game with two on and two outs in the top of the second to get Derek Long to groundout to Giovanny Alfonzo at short. Smith finished the outing allowing a run on two hits as he struck out one in 1.1 innings.

Brandon Johnson and Bryant Holtmann each worked 2.0 innings in relief on Wednesday. Johnson gave up two unearned runs on just one hit, while Holtmann struck out one and allowed just one hit.

Robby Coles and Jameis Winston pitched a perfect eighth and ninth inning, respectively.  Both Seminole pitchers faced the minimum in their inning of work.

Together the six Seminole pitchers did not allow a walk for the first time this season.

After Presbyterian took a 1-0 lead in the top of the second on an RBI single by Ryan Hagan, the Seminoles answered in the bottom of the inning with seven runs all on two outs.

Brizuela and Knief opened the inning with back-to-back singles and advanced a base on a sacrifice bunt by Alfonzo.  After PC starter Chad Sanders (0-1) got John Sansone to groundout to third, a wild pitch brought home Brizuela to tie the game at 1-1. Delph then began the scoring spree with a run scoring infield single to short. Stewart followed with a bunt single out in front of the pitcher’s mound and Marcus Davis drew a walk to load the bases.  McGee also drew a walk to bring home Knief, while John Nogowski hammered a two-run single off the fence in right field.  Brizuela and Knief capped off the scoring in the second with consecutive RBI singles to right center.

Presbyterian would not go away quietly plating a run off Smith in the third following a bunt single to third by Billy Motroni. He would score all the way from first one batter later on an RBI double down the line in left off the bat of Brad Zebedis.

The Seminoles would answer the call in the bottom of the third when Delph connected on his first career home run to right.  Sansone scored on the play after opening the inning with a walk.

“It’s exciting to get the first one out of the way,” added Delph. “That one was for my Aunt Nancy.  She told me a long time ago, even before I got to school, that I had to hit one for her while I was here.”

The Blue Hose cut the deficit to 9-4 in the fifth taking advantage of the only Seminole error of the game to plate two runs off Johnson.

FSU pushed its lead back to six at 10-4 with a run in the seventh for the final margin. Once again the Seminoles put together a little two-out magic as Delph recorded his fourth hit of the game with a single to left and scored on Stewart’s RBI double off the fence in right.

Eight of the 10 runs scored by the Seminoles on Wednesday all came on two outs.

Delph became the third Seminole this year to record four hits in a game as he joined Davis and Seth Miller.

Florida State will wrap-up its 15-game home stand this weekend as the Seminoles open ACC play against Boston College on Mike Martin Field insider Dick Howser Stadium beginning Friday, March 8 at 6:00 p.m. Games one and two of the series are set for 6:00 p.m., while Sunday’s series finale will start at 1:00 p.m.  Friday and Sunday’s games will air live on ESPN3.