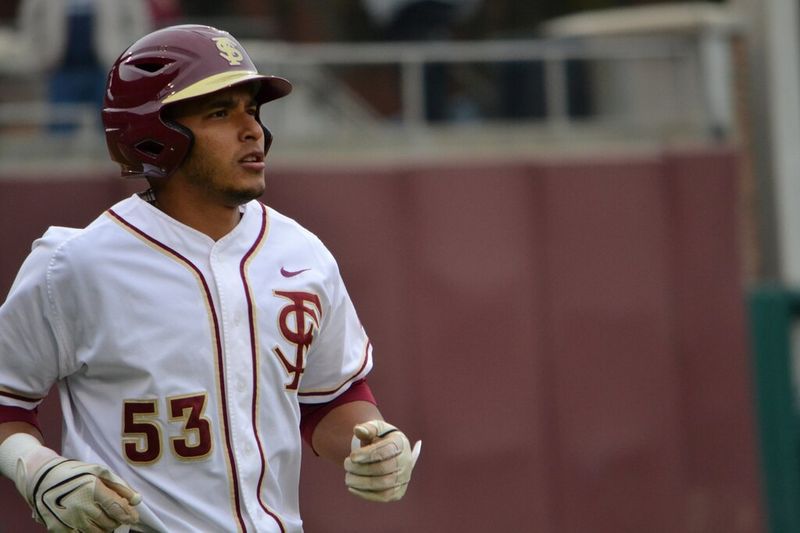 FSU Beat Writer Patrik Nohe is off for the weekend. The following is a press release from Florida State University:

TALLAHASSEE, Fla. – No. 6 Florida State (8-0) remained undefeated on the year pounding Villanova (1-4) 23-5 in game one of a three-game series on Friday in front of 4,280 on Mike Martin Field inside Dick Howser Stadium.

Florida State weathered the cold conditions on Friday finishing with 22 hits, the most since clubbing 38 against Ohio State in the Tallahassee Regional finals on May 31, 2009. It also marked the most runs scored in a game since plating 23 in a win over Texas A&M in the 2011 Tallahassee Super Regional.

“Everything went our way tonight, but tomorrow is a totally different day, a totally different scenario; that’s what makes this game so great,” said head coach Mike Martin. “We just happened to get a lot of breaks tonight and took advantage of them. But this club has a good grasp of the game.  They know that nothing is predictable in this game except the unpredictable.”

Seven Seminoles recorded multiple hits in the win led by senior Seth Miller who tied a career-high with four hits. Miller reached base in his final six plate appearances collecting three singles, a double and one walk while reaching on a fielding error.  The Southport, Fla., native finished with three RBI and two runs scored.

“Our approach is going to stay the same regardless of the score of the game,” said Miller. “We ended up coming up big scoring 23 runs today, but that isn’t going to change our mindset. You have to be ready everyday whether the score is close or if you are up big.”

Jose Brizuela, John Nogowski and Giovanny Alfonzo each registered three hits as Brizuela and Nogowski both tied a career-high, while Alfonzo set a new mark. Brizuela reached base on six of his seven plate appearances collecting three singles and three walks to go along with three runs scored and two RBI.

Nogowski entered in the fourth inning and picked up hits in his first three at-bats with a two-run double, a two-run single and another single in the seventh.  The Tallahassee, Fla., native finished with a career-high four RBI.  Alfonzo had three singles and scored three times.

Marcus Davis, Stephen McGee and John Sansone all finished with two hits apiece. Davis drove in a season-high three runs on two hits, while McGee strung together two RBI singles, walked once and was hit by a pitch. Sansone reached base in his first six plate appearances drawing three walks, a hit-by-pitch, a double and a single.  The New Castle, Pa., native scored four runs and posted two RBI.

Brett Knief finished the evening with a season-high three RBI in the win.

“Everybody came up big tonight,” said Miller. “We are a versatile club; everybody can do a lot of things.”

Florida State scored a run in seven of the eight innings in which they had an at-bat, while 14 of the 23 runs came on two outs.

Brandon Leibrandt (3-0) received plenty of run support to garner his third win in as many starts to open the 2013 campaign.  The sophomore southpaw finished the afternoon allowing five runs, two earned, on seven hits in 5.1 innings of work.  He walked one and struck out a season-high eight batters.

Leibrandt took a 2-0 lead into the third inning when an error by the Seminole pitch would lead to a two-out, three-run home run by Villanova shortstop Tyler Sciacca to give the Wildcats a 3-2 advantage.

The lead would be short lived as the Seminoles answered with seven runs in the bottom of the inning to grab the lead for good.

Robby Coles was impressive in his 1.2 innings of work as the junior college transfer struck out all five batters that he faced.

Billy Strode and Luke Weaver worked the eighth and ninth innings, respectively to close out the game.  Both pitchers faced the minimum, while Weaver registered a pair of strikeouts.

“I was pleased with our pitchers,” added Martin. “I thought they did a good job of keeping their poise.  Leibrandt did not have a great outing, but we know that he will continue to improve as we move throughout the season.  Billy Strode pitched well.  Robby was very impressive and of course we wanted Luke to get an inning before he throws on Tuesday.”

With Friday night’s win, Florida State improved to 183-46 all-time when facing an opponent for the first time.