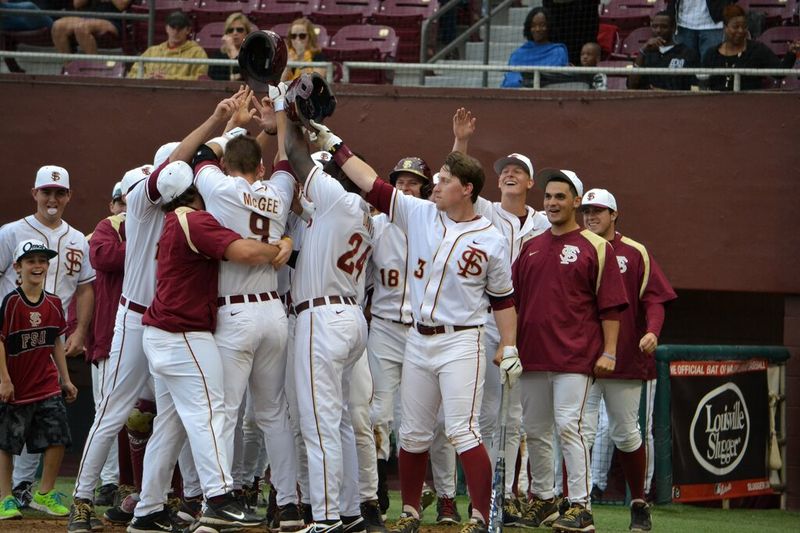 Florida State beat writer Patrik Nohe was off on Sunday, the following is a press release from Florida State University:

TALLAHASSEE, Fla. – No. 5 Florida State (15-0, 3-0 ACC) led from start to finish on Sunday afternoon in the series finale against Boston College (3-11, 0-3 ACC) to complete the sweep of the Eagles and remain undefeated on the year.

At 15-0, the Seminoles are off to their best start since 2007, when the Garnet & Gold opened the season with a school-record 23 straight wins.  This year’s record is tied for the second best start in school history equaling the start of the 1975 squad.

The victory on Sunday also extended the Seminoles win streak when wearing their gold uniforms to 17 straight dating back to last year.  FSU is a perfect 5-0 in 2013.

“I think anytime you are able to win three games on the weekend in the Atlantic Coast Conference, you have to be extremely pleased,” said head coach Mike Martin. “I was today.”

For the third straight game, Florida State received another outstanding performance from its starting pitcher as Peter Miller (3-0) gave the Seminoles 5.2 shutout innings on Sunday.  The junior right hander scattered six hits and two walks while finishing the game with seven strikeouts.

“I thought Peter Miller pitched 5.2 (innings) of very good baseball,” said Martin. “We got good relief out of Jameis and Brandon. They pitched very well.”

After recording two quick outs in the top of the first, BC strung together back-to-back bloop singles to put runners at the corners. Miller would respond by getting Chris Shaw to groundout to John Nogowski at first to retire the side.

In the second, Joe Cronin looked to give BC its first lead of the series as he laced a double to the gap in right center with Matt McGovern on first after reaching on a fielder’s choice.  But an outstanding relay throw by DJ Stewart to John Sansone to Stephen McGee nailed the Boston College right fielder at the plate for the final out of the inning.

From the third to the sixth innings, Miller settled down retiring 10 of 11 BC hitters before the Eagles put together back-to-back base hits with one out in the sixth. Following a fly out and a walk to the next two batters that he faced, Miller would turn the ball over to Jameis Winston who got Nate LaPointe to ground into a force out at third with the bases loaded to retire the side.

Dating back to his second start of the season, Miller has put together a nice scoreless streak of his own as he has not allowed a run in the last 17.0 innings.  In fact, the Lutz, Fla., native has given up just four runs, two earned, in 19.1 innings in four starts this year.

Coming off the big defensive play at the plate in the top of the second, Florida State responded with three runs to jump out to an early 3-0 lead off BC starter Andrew Chin (1-3).  Nogowski opened the scoring with an infield single to short and advanced to third on Brett Knief’s single to left.  Two pitches later, Jose Brizuela would bring them all home on a bizarre play.  The sophomore third baseman laced a single to left, but the ball somehow took a strange hop, got by the BC left fielder and rolled all the way to the wall.  Brizuela, who was credited with one RBI on the play, came all the way around to score on the three base fielding error by Logan Hoggarth in left.

FSU pushed its lead to 4-0 in the sixth when Knief ripped a ball back up the middle that caromed off the knee of Chin and into left field.  Knief was credited with a double on the play.  Chin came out of the game after that play but would walk off the field on his own power.

With Nate Bayuk on the mound after replacing Chin, Brizuela would bring home Knief on an RBI single to center.

The Noles broke open a close game in the seventh scoring five runs including four on two outs to take a commanding 9-0 lead.  Josh Delph singled and scored on Stewart’s double to straight away center and Nogowski brought home a pair on a double down the left field line.  After a walk to Knief, Brizuela would clear the bases once again with a two-run triple to right center for his second three-bagger of the season.

Brizuela finished the afternoon tying career-highs for hits (3) and RBI (4), while Knief went 2-for-3 with three runs scored.

“I was just glad that I could produce for the team,” said Brizuela. “It was a great accomplishment throughout the whole line-up this entire weekend.”

Nogowski was the only other Seminole to record multiple hits on Sunday as the sophomore first baseman finished the game 2-for-4 with two runs and two RBI.

Boston College scored its only run of the game in the eighth off Winston.  The freshman right hander gave up a double to Tom Bourdon, who finished with a game-high four hits, to lead-off the inning.  After a single and a walk loaded the bases with one out, LaPointe dropped a bloop single to short center to score Bourdon and make the score 9-1.

Brandon Johnson came on in relief of Winston with the bases loaded and needed just one pitch to get out of the jam as he got McGovern to ground into an inning ending double play.

Both Winston and Johnson worked 1.2 innings in relief on Sunday.  Winston allowed a run on four hits and a walk, while Johnson gave up two hits to the six batters that he faced.

“They are incredible,” added Brizuela on how well the pitching staff has done so far this season. “I am just happy that we have the guys that we have; they are just amazing.”

Florida State will return to action on Tuesday, March 12 for its first road game of the season as the Seminoles travel to face intra-state rival Florida.  First pitch is scheduled for 7:00 p.m. down in Gainesville.