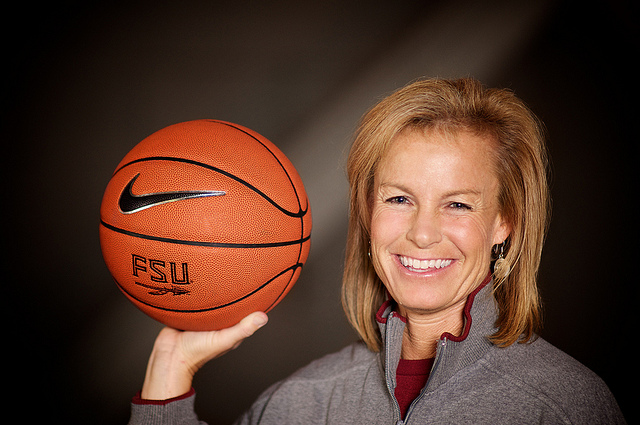 The Florida State University women's basketball team had a comeback season this year after taking a step back following their 2011-12 campaign.

After missing the NCAA tournament for the first time in eight years, ending a streak of seven consecutive bids, the Seminoles found themselves back in the NCAA tournament again this year as an 8-seed, losing in the second round to defending national champion Baylor University on the Bears' home court in Waco, Texas.

For her work in turning the Seminoles around after a difficult down-year the season before, head coach Sue Semrau will be honored by the Fellowship of Christian Athletes on Sunday, April 7th, with the Kay Yow Heart Coach of the Year award.

Named for former NC State coaching icon Kay Yow, the award is presented annually by the FCA to honor a basketball coach who has exemplified biblical principles over the course of his or her career. Yow, who passed away from breast cancer in 2009, was presented with the inaugural award at the 2008 Women’s Final Four.

“I first met Sue when she was Jane Albright’s assistant at Wisconsin and it has been so fun to watch her grow as a leader, coach and, most importantly, as a follower of Jesus,” said Donna Noonan, FCA’s national director of events. “Kay was all about seeing her players become the women God created them to be, and I see that same trait in Sue. We are thrilled that Sue is this year’s winner of the Kay Yow Heart of a Coach Award.”

The winningest coach in the history of FSU's women's team, Semrau has three times been named the ACC coach of the year. In her 18 years at Florida State she has raised the profile of the program while putting girls in the pros and helping most of her players graduate.

This year Semrau had three players named All-ACC as FSU achieved its 8th 20-win season under Semrau and made the postseason for the 10th time in 11 years.

Semrau is also well known for her philanthropic efforts which include a partnership with Samaritan's Feet (and their annual barefoot game) as well as making visits to the Boys and Girls Club at the Coalition for the Homeless in Orlando and elementary schools in Harlem, West Chester and Wadsworth, Ohio and Martinsville, Ind., as well as the Duke Hospital in Durham, N.C.