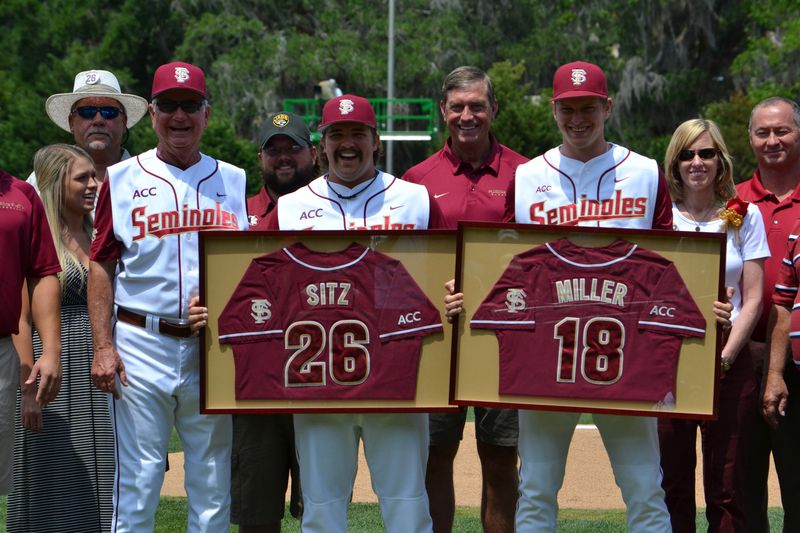 Florida State clinched the Atlantic division of the ACC for the seventh year in a row on Saturday afternoon with a 6-1 win over Clemson during Senior Day at Dick Howser Stadium.

Starting pitcher Brandon Leibrandt was steady and the Seminole offense provided more than enough run support to help Florida State take the series and the division, as they captured a two-seed in next weekend's Atlantic Coast Conference tournament in Durham, NC.

"That was a very interesting baseball game that was just played, we got a couple of key hits but no question the key to the game was the sixth inning."

Clemson wasted no time putting the pressure on Leibrandt. Despite just four batters coming to the plate in the top of the first, Clemson worked counts and set the pace early.

Maleeke Gibson lined the third pitch of the game down the rightfield line for a double and moved up on a productive out by the Tigers' two hitter, 2B Steve Wilkerson. Steven Duggar, the Clemson leftfielder, singled through the right side of the infield to score Gibson the next batter.

But the Seminoles evened the game in the bottom of the second on a one-out double by SS Giovanny Alfonzo. After 3B Jose Brizuela laid down a bunt for a basehit, Alfonzo roped a 2-0 pitch over the third baseman's head and down the line to the corner in left, scoring Brizuela from first.

An inning later the Seminoles pulled ahead behind a few Clemson mis-haps and some opportunistic base-running. After LF DJ Stewart singled to start the inning he charged hard into second, forcing the second baseman to fumble with the ball and miss the tag. Florida State's three-hitter, C Stephen McGee singled to move Stewart to third with no outs for DH Marcus Davis.

Davis had battled Clemson pitcher Zack Erwin in his first at-bat and timed his fastball. In their second meeting, Erwin tried to stay away from Davis with the fastball but was forced to come in on him when he fell behind 3-1 and Davis roped it to right to score Stewart and give FSU the lead.

That was also it for Erwin, who left the game after giving up three runs on six hits in two-plus innings of work. He was replaced by Jonathan Meyer who let in the other run Erwin was on the hook for when John Nogowski doubled on a strange play to third to score McGee and make it 3-1.

But Florida State failed to press the advantage further and that almost came back to bite them a few innings later.

After forcing Leibrandt to throw 75 pitches in his first four innings, Clemson relented a little and gave him a pass with an eight-pitch fifth. They turned the heat back up to start the sixth inning though, stringing together a couple of singles with no outs to knock him from the game. Leibrandt finished the day having pitched five-plus innings, given up nine hits and an earned run while walking two and striking out three.

LHP Billy Strode came in to replace him and immediately allowed CF Thomas Brittle to drop a bunt and load the bases.

"A lot of times you bring a guy in [to] that situation and he's like a deer in headlights," said Martin. "Billy took the ball, the guy put down a perfect bunt and all of the sudden it's bases loaded.

"Billy just took the bull by the horns though."

Strode buckled down and got the next hitter, LF Tyler Slaton, to strike out looking before inducing a shallow pop-fly from PH Jay Baum for the second out of the inning.

With the bases still full and two down, Strode worked ahead of Wilkerson in the count before getting him to line out softly to second, allowing the Seminoles to escape the inning with their lead in tact.

"The situation itself is not what you want to come into," joked Strode. "But the opportunity they gave me was pretty big and to come out of there with no one scoring, that's big."

In the bottom of the 6th the Seminoles added a little insurance. Brizuela singled to left-center to lead the inning off and Alfonzo reached after getting plunked. John Sansone moved both runners into scoring position with a sacrifice bunt down the third baseline.

Then with one out, Seth Miller broke the game open on a 1-2 pitch that he lined up the middle for a two-RBI single.

"The guy left a changeup over the plate and I was able to stay inside of it, drive it up the middle," said Miller, who before the game participated in FSU's Senior Day festivities.

In the top of the 7th, trailing 5-1, Clemson squandered a chance to cut into the Seminole lead when Boulware was gunned down at third by Jameis Winston following a Shane Kennedy single. Rather than have two on with one out, Clemson had a man on first with two down and Florida State got out of the inning a few pitches later on a fielder's choice.

A wild pitch allowed Marcus Davis to score in the bottom of the 7th to make it 6-1 before Strode came out and worked a perfect 1-2-3 eighth.

He worked the ninth for Florida State on Saturday too. The sophomore went four strong for the Seminoles, giving up just four hits and no runs while striking out a couple and holding the Tigers without a walk over that time.

FSU will play a one-game non-ACC exhibition against UNC in Chapel Hill before heading to Durham for the ACC tournament next weekend.