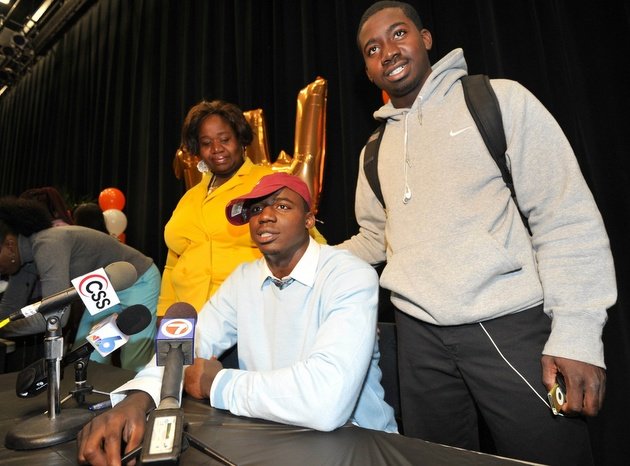 Back in February on National Signing Day one of the very first commitments televised on ESPN was that of Booker T. Washington's Matthew Thomas. The 6-3 outside linebacker donned a Florida State cap and did a tomahawk chop, later that day he faxed in his letter of intent. Everything seemed fine.

And then it wasn't. Thomas later told the Miami Herald that he had never intended to make that decision.

“What happened was on Signing Day [was] I wasn’t sure who I wanted to sign with. I had issues with different schools. But when I told my mom I didn’t want to sign with anybody and wait and give it a few days she said I couldn’t do that. She said, ‘FSU is a good school – pick them. It’s close to home.’ I wasn’t agreeing with it. But I felt like I was being disrespectful to her if I didn’t sign. So I made her happy.”

Later reports would emerge with quotes from Thomas' father, Billy,indicating his desire to attend USC. As late as this morning an LA Times report still had the talented young linebacker pining to be a Trojan.

"After meeting with coach Fisher and his staff and gathering all the information I have decided to honor my commitment to Florida State," Thomas said in a statement released to Warchant.com. "I also want to be close to my family and I want be part of what they are building at Florida State. I'm looking forward to winning games at Florida State and building towards my future."

Florida State's incoming freshman class is expected to report by this Saturday and Thomas apparently will be among them.

This comes as especially good news given Florida State's depth issues at the position. I can't imagine it hurt FSU's chances when Fisher and staff reminded Thomas of his potential to start immediately. The thing that probably helped Thomas decide most was that Fisher likely told him in no uncertain terms that he would not get a release. After Notre Dame put their foot down in a similar situation, Fisher and Florida State didn't even need to worry about looking like the bad guy in this one.

The precedent was already set. And it's important that Florida State not give other schools the impression that they can continue recruiting FSU's commitments until they report. Thomas likely didn't want to lose a year and figured it would be better if he just headed to Tallahassee.

We'll know for sure this is over when he reports Saturday, but for now, it seems resolved.