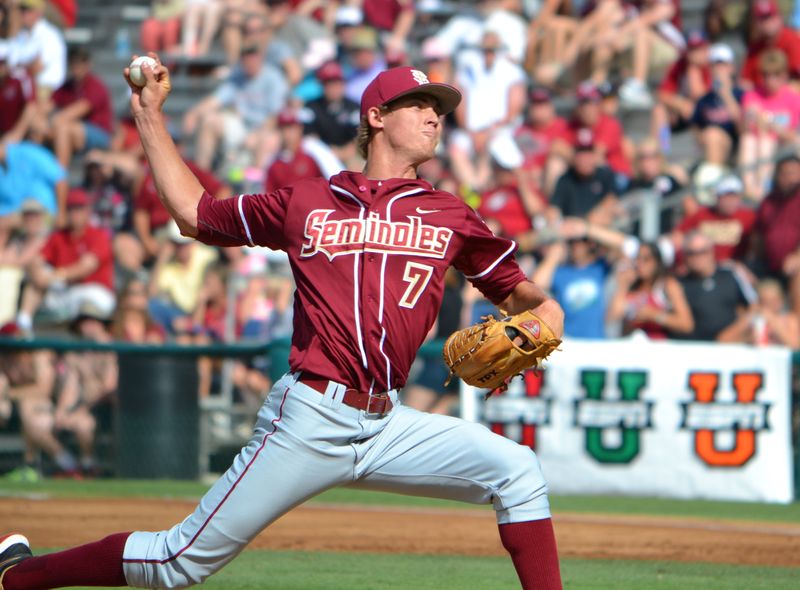 Luke Weaver sat in the post-game press conference with shaving cream matted in his hair, his eyes still blood-shot and stinging from some celebratory post game tomfoolery.

That's what happens when you strike out 14 batters and dominate an NCAA Regional like Weaver did on Saturday. You get shaving creamed by Justin Gonzalez and Scott Sitz.

"You know, they only do it when you get interviewed on the field and nobody knew about it, I wasn't telling anybody about [the on-field interview]," joked Weaver. "During the whole interview I was just peeking the whole time thinking somebody was going to come."

But Sitz blindsided him in the lockerroom and after a brief chase around the clubhouse, Weaver just resigned himself to his fate and took a couple pies full of shaving cream from Sitz and Gonzalez to the face.

"My visions alright now, but it burned," he said laughing.

Unfortunately for Troy, Sitz and Gonzalez were the only ones that managed to catch up to Weaver on Saturday evening. The sophomore was virtually unhittable during eight scoreless innings that kept the Trojans thoroughly off balance.

"His fastball was really jumping on us," said Troy head coach Bobby Pierce. "We couldn't really make an adjustment to it, we were trying to, we were attempting to, but he hid the ball very well, he had good velocity, he commanded it well. Probably a season high in strikeouts I would imagine, didn't walk anybody in the process.

"We never really could get much stirring in any inning, really."

It was, in fact, a season high for strikeouts. It was the most strikeouts any FSU pitcher has thrown since 2006. Weaver also didn't walk anybody. He faced 26 batters, struck out 14, gave up just four hits, no walks and Troy never managed to string together anything beyond an attempt to score from first by the slow-footed Trae Santos on a double in the bottom of the 4th.

"A lot of times the team that scores first seems to get a little momentum, and certainly that was a big play [at home]," said Martin.

Instead Florida State got on the board first with a three-run top of the 5th inning sparked by more good leadoff work from Seth Miller. After battling Troy starter Tanner Hicks for a walk, Miller ended up on third following a Giovanny Alfonzo single and an errant throw.

John Sansone and Josh Delph both made productive outs in the next two at-bats to bring Miller and Alfonzo in before DJ Stewart capped the inning with a mammoth solo home run to right-centerfield to make it 3-0.

Miller has been one of the Seminoles' biggest offensive weapons in the Tallahassee Regional. The senior CF has lead off five innings and reached in four of them. Overall he's hit 3 for 5 with five walks, a triple, two doubles and an RBI. Miller's on-base percentage in the regional has been .800 and he has sparked a three, a four and a five run inning by getting on to lead things off. On Saturday it was once again Miller who got the ball rolling for the 'Noles on offense.

"When I lead off it's my job just to get on base," said Miller. "We manufactured runs [tonight], that's just Seminole baseball."

The game got out of hand late when Troy went to its bullpen, but the final result wasn't indicative of how tight this one was for the first six innings.

"We’re just very proud of the way we played overall today,” said FSU head coach Mike Martin. “We knew it would be a tough ball game- it was. I know people might see the score and thing it was a so-called cakewalk, but it was a long way from that.

"We happened to get a home run in the sixth to go up 4-0 and [John Nogowski] hit one to make it five, and of course Coach Pierce was then looking at the future like any other coach would do, we just happened to score some more [late]."

Said Pierce: "We've scored in big numbers so many times this year we all thought that inning would come. It never did. But you credit Weaver for that."

Weaver wasn't even 100%. In the middle of the week the sophomore was forced to visit a doctor because of a fever and flu-like symptoms and was prescribed a Z-pak.

“I’m just very proud he wasn’t about to try to say ‘I don’t feel like I can go today,’” said Martin. “I already checked, he took his pill this morning and I may be looking for some of them bad boys myself.”

After DJ Stewart, Stephen McGee and Marcus Davis did the heavy lifting on Friday, driving in 9 of the team's ten runs, it was the bottom of the Florida State order that carried them on Saturday. The 5-9 hitters in the Seminole lineup combined for eight hits and drove in eight runs.

John Nogowski connected with his first home run of the season in the 8th, he also tripled and drove in three. All Weaver needed was the three-run 5th, but FSU provided him with plenty of insurance beyond that.

Florida State has now won its two Regional games by a combined total of 21-0.

Next up the Seminoles will play the winner of tomorrow's Alabama-Troy elimination game at 5 PM with a chance to close out the Regional with a victory.