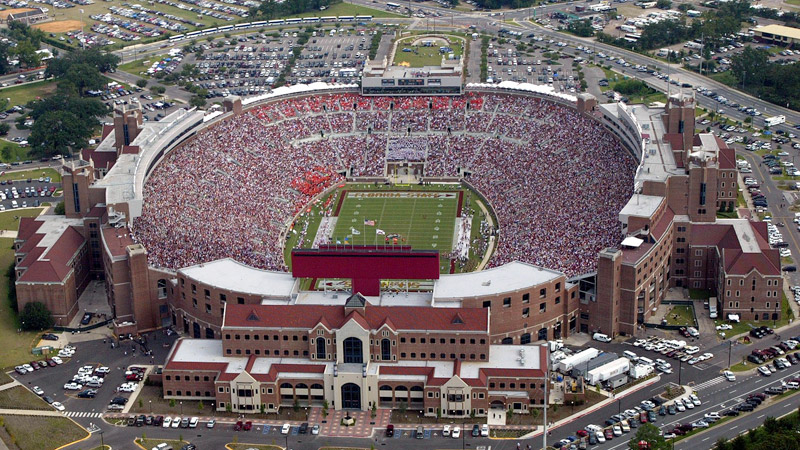 "I am extremely honored and excited to have to opportunity to lead the Florida State athletics department," said Fuchs in her initial statement. "I want to thank President Barron for the support and confidence, I also want to recognize Randy Spetman for his passion and the commitment he’s shown to all of our sports programs and student athletes.”

Fuchs was a basketball player at Florida State from 1997-2001, she played under Sue Semrau and served as a captain before taking a job at the ACC offices after college. She returned to Florida State in 2010 and most recently headed up the school's compliance office.

As of June 5, 2013 she became one of just seven female AD's in Division I and the first female to head up FSU's athletic department in school history.

“I don’t know that it’s fully sunk in even now," said Fuchs. "It hasn’t even quite been a full week. It’s been very excited, it’s been mixed emotions too. Obviously we all loved Randy.”

And this is where the timeline and order of events leading up to last week's decision to remove Spetman as AD, appoint an interim director and then begin an AD search become a little confusing. This is where, despite statements from those in FSU's Athletic Department, it doesn't appear to have been handled all that delicately.

Spetman's contract ran until February 2014. But last Wednesday– the day before Spetman was set to present a five-year plan to the Board of Trustees– the decision to remove him was made.

"I was in Indianapolis for a rules seminar up there and I got a call from President Barron at about one o’clock on Wednesday," said Fuchs. "This wasn’t something that he and I had talked about previously, it was a little bit of a surprise.”

“These circumstances, I wasn’t fully prepared for that, I guess.”

No kidding. Nobody was, and I bet that includes Spetman who has been unavailable for comment ever since he was replaced. FSU had already distributed the plan to the media and reporters were preparing to attend the BoT meeting to cover Spetman's presentation. Then just 24 hours before presenting his vision to the board Spetman was out, the agenda item was no longer listed and the five-year plan was more or less scrapped.

Spetman's long-term future at FSU has been in doubt since he was given a one-year extension with no raise last football season. That never bodes well for anyone. But the impression given by those in the Florida State Athletic department was that this transition was always part of the plan and it was done with deliberation and precision– at the right time.

That notion is contradicted by a few key elements of this turnover though. First, Randy Spetman was on the Board of Trustees' agenda just 24 hours ahead of the meeting, up until the middle of Wednesday he was still scheduled to present a fairly large long-term plan for FSU's Athletic Department and was even scheduled to field questions afterward.

Why even go through the motions of scheduling it and sending the plan to the press if it was never going to be presented.

"Just even the notion of presenting a strategic plan that you're not going to implement– that doesn't make sense," said President Barron after Thursday's BoT meeting."

Fair point, but the timing of replacing Spetman and pulling the presentation off the agenda lends itself to the perception that FSU only realized it didn't make sense this past Wednesday.

Then there's the fact that the person being promoted to interim AD wasn't even in the same state and had no idea it was coming.

“In athletics you’re told you’ve got to be prepared for anything and this is one of those moments,” Fuchs said on Tuesday.

That's a good philosophy to live by, but it hardly makes this move seem premeditated.

So what was Fuchs told to expect in her position as the interim AD? Heck, how long will she even be in the role?

"I don’t know that that’s known," said Fuchs of the timeable. "I’m prepared to serve as long as that takes and work with our staff for as long as this interim period takes. But obviously the timing of this was just prior to the board of trustees meetings, so the President Thursday and Friday was attending those. We had a great meeting [Monday] and this is a priority now that these meetings have concluded. That this is now something he’s moving quickly on and it’s a priority for him to identify our next AD."

"I think he’s given us a very clear charge as to what he expects for us over this time period whether it’s three months, six months or a year."

Right now Florida State is yet to even form a search committee for the school's next AD.

Fuchs is certainly capable of running the program in the interim. In her last role, Fuchs worked closely with all of FSU's different sports programs to ensure compliance to NCAA rules. Under her direction, Florida State's football team got off of its probationary period this past season.

So what is expected in her new role?

"The first priority was meeting with the staff and coaches and reassuring them that we’re not in a holding pattern here," said Fuchs. "We’re going to continue moving forward and advancing.”

Technically, without a long-term plan that's still a holding pattern. But the issue at Florida State is hardly Fuchs, if not at FSU she was already on track to become an Athletic Director somewhere, she is not wanting for qualifications. She is a solid choice.

The issue is how this was planned, when it was decided and how it was executed. If this was indeed meticulously planned and executed, it certainly doesn't look that way. And regardless of whether it was or not, will their AD search in the coming months be handled more delicately than the transition from Spetman?