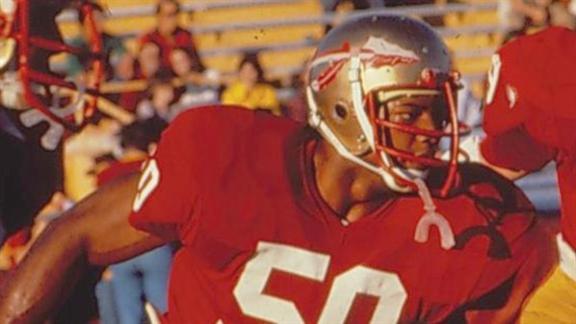 Inducted into the Florida State University Hall of Fame in 1986

To today's generation of football fans Ron Simmons is best known for his Hall of Fame professional wrestling career. He was the first black heavyweight champion in both WCW and WWE history and has enjoyed extensive success over a four decade career that has seen him wrestle under both his given name and the ring name "Farooq Asad."

That he has reinvented himself and continues to bring recognition to Florida State in his post-football career- much as Lee Corso and Burt Reynolds did- is worthy of acknowledgement in and of itself. But unlike Corso and Reynolds, Simmons was a two-time consensus All-American.

By the time Simmons left Florida State he was arguably the greatest player to have come through the program up to that point. Fred Biletnikoff had gone on to achieve great success at the NFL level by that point, but in terms of what was done on the field for the Seminoles while playing in college it's hard to find a better career over the first 35 years of FSU's history.

Born in Perry, Georgia in 1958, Simmons would grow up to star as a tight end and linebacker on the Warner Robbins HS football team. By 1977 he was one of the most highly touted recruits in the country. He chose Florida State, which was a coup at the time for second-year head coach Bobby Bowden.

In his very first game, as a true freshman in 1977, Simmons announced his presence by winning national lineman of the week honors for a dominating ten tackle performance against Southern Miss. That season from his middle guard position on the Seminole defensive line Simmons collected 128 tackles and 12 sacks.

In his first season Simmons had broken the single season school sack record, that record stood another 19 years until Reinard Wilson and Peter Boulware both broke it in 1996.

Simmons shifted to the nose for his final three seasons where he pulled down another 13 sacks over those three years to finish with 25 for his career. That mark also stood as a school record until it was broken by both Wilson and Boulware in 1996. Simmons is still third all-time at Florida State in sacks to this day.

Over his four year career Simmons was recognized on 19 different All-American teams and was an NCAA consensus All-American as a junior and senior.

As Simmons' profile was rising nationally, so too was Florida State's. The Seminoles went 39-8 over his four seasons. After a Tangerine Bowl win during FSU's 10-2 1977 season, the Seminoles went 8-3 in Simmons' sophomore season and missed a bowl bid (this was back before the days of Emerald Nut Bowl and San Diego Credit Union Bowl when not every team went). But in 1979 and 1980 the Seminoles went to back-to-back Orange Bowls- finishing a then-school best fifth in the nation following the 1980 season. The 6-1 230-pound defensive tackle also never lost to Florida.

After being drafted in the sixth round by the Browns in the 1981 NFL Draft, Simmons played a season in Cleveland before making CFL and USFL stops in Ottawa and Tampa. Then he hung up the cleats and put on the wrestling tights, embarkinging on a professional wrestling career that started in 1989 and continues to this day.

In the era right before Florida State's 14-year run from the late 80's into the early 00's, Simmons was one of the players helping to raise the Seminoles' national profile and put FSU squarely on the map.

Granted, in today's game a 6'1 230-pound defensive tackle could never even play at Florida State. Tim Jernigan is the lightest defensive tackle (likely to see playing time) on this year's Seminole roster- his weight is listed at 294 pounds.  If Ron Simmons played today, he would likely be left as a linebacker or maybe asked to play defensive end- provided he had the foot speed.

But in his time at Florida State, Simmons was one of the most dominant defenders in the entire nation. And without a doubt he was the best defender to have ever played at Florida State up to that point- evidenced by the fact Simmons' number 50 was the first defensive number ever retired at the school.

It was a different era, but Ron Simmons dominated that era. His place in the Seminole record books is still secure over 30 years after he graduated. He's one of the greatest Seminoles of all-time.

Next we break into the top 10 of the countdown...