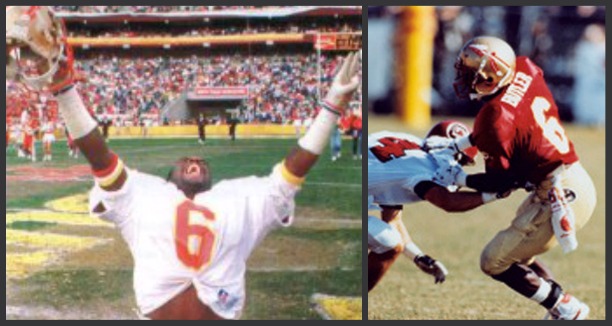 Inducted into the Florida State University Hall of Fame in 2001

When it comes to some of the most inspirational personal stories in the history of Florida State University, it's hard to top Leroy Butler's. Butler was born so pidgeon-toed that doctors had to break bones in his feet as a baby in hopes of correcting the problem.

Early on his doctors thought he would be fortunate just to walk normally when he grew up.

Butler was raised in the crime-ridden Blodgett Homes housing projects in Jacksonville, Florida, along with four other siblings by his single mother. He was in a wheel chair through much of his early childhood and then from six years old until the age of eight he was forced to wear leg braces.

Per a line in his professional bio: "He spent much of his early childhood gazing out the window watching neighborhood children play kickball—something he could not even imagine doing."

That all changed at the age of eight though when the bones and muscles in his young legs proved to have grown the strength needed for him to begin a more regular life. Doctors said the braces could come off and soon he was outside almost all the time. By the age of ten he was beginning to stand out on neigborhood and junior high football teams. Soon he was in high school where he was a three year letterman at Robert E. Lee. By the time he was a senior he was one of the most coveted recruits in the entire country.

He arrived in Tallahassee in 1986 and was a three-year starter at Florida State from 1987-1989. For two years he shared the defensive backfield with Deion Sanders and was a part of two of the greatest Florida State secondaries in school history.

In 1987 the Seminole defense surrendered just 142.1 passing yards per game. A year later in 1988 they would give up only 133.2 per game. Butler tallied 100 tackles, forced two fumbles and intercepted a couple of passes playing free safety during those two seasons.

Then in 1989, with Sanders gone, Butler shifted from safety to corner and turned in one of the best performances any Seminole corner has ever produced over a season. He pulled down 94 tackles and a sack, a forced fumble, nine pass break-ups and seven interceptions. The interception total was the most since Monk Bonasorte hauled in eight a decade earlier. Four publications named him an All-American in addition to earning consensus NCAA All-American honors.

In the 1990 NFL Draft he went in the second round to the Green Bay Packers, 48th overall. Over the next 12 seasons Butler was a fixture in Green Bay, playing until 2001, winning a Super Bowl, recording 38 career interceptions and weaving himself into Packer lore for the rest of history in the process. He was named to the NFL All-Decade team for the 1990's, but will be best remembered by Packer fans for originating the Lambeau Leap.

He was also the first player in NFL history to record 20 sacks and 20 interceptions (or at least was the first to do it in the era that counts sacks as a statistic), was four times an All-Pro and four times a Pro-Bowler. Butler was enshrined into the Green Bay Packers' Hall of Fame in 2007.

If there were a checklist of all the things you look for in a great football story, Butler has all his boxes filled. He overcame physical setbacks as a child to become one of the greatest football players in Florida State Seminole and Green Bay Packer history and has gone on to do some great philanthropic work since retiring.

He played at a high level for a long time, he was a three-year starter at Florida State– playing alongside a future NFL Hall of Famer for two of them– then played for 12 years and won a Super Bowl in Green Bay.

And he's also produced his share of memorable moments. Points in time that transcend a game or even a season and become synonymous with a team's success or personality from that year. There was the play that orginated the Lambeau Leap (as seen in the link above), and at Florida State there was this:

In 1988, with the game tied at 21 and just 90 seconds remaining, Bobby Bowden called the infamous "puntrooskie" play and faked a bad snap on a 4th down to draw the Clemson punt-return team off guard. Leroy Butler ran the other direction with the ball and went 78 yards to set up the game-winning field goal as FSU toppled the 3rd ranked Tigers on the road.

That was right at the start of FSU's heyday in the Bobby Bowden era. It was, at that point, one of the biggest plays in the program's history and nearly 25 years later it's still near the top of that list.

Leroy Butler did everything it takes to be remembered as one of the best of all time. He turned in great moments, put up great numbers and experienced immense success at every level of the game.

He's one of the greatest Seminoles of all-time.

(That was the best video of the Puntrooskie I could find, but if you're feeling nostalgic, here's the full highlight package of the 1988 FSU-Clemson game– including Deion Sanders returning a kick for a touchdown.)

Next on the countdown is a Seminole pass-rushing great.