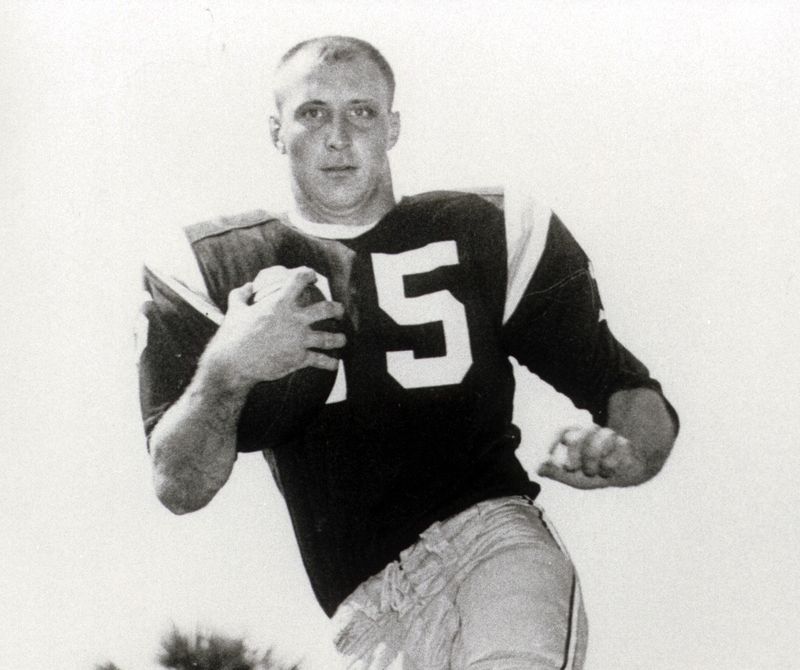 Inducted into the Florida State University Hall of Fame in 1977

Of all the great players to ever come through Florida State University, Fred Biletnikoff is the hardest to rank. The game was different when Biletnikoff played it, he was one of the players that helped move college football into the passing era. He is one of the greatest receivers in NFL history. The award given annually to the nation's best wide receiver is even named after him.

At the time his numbers looked absurd, his 57 catches and 11 touchdowns as a senior captured the attention of the entire country. 15 years after restarting the school's football program, Biletnikoff was the first Seminole to be named a consensus All-American.

But in today's era with the passing game such a major part of offenses across the nation, Biletnikoff's receiving totals from the early 60's seem unremarkable. Ron Sellers, who played in the same decade, had two thousand more receiving yards in the same number of seasons as Biletnikoff played, for instance.

And forget comparing him to some of the receivers Florida State has had in the past couple decades.

Different eras, different game. Nowadays you see multiple receiver sets, spread offenses and a whole range of innovation in the passing game. It has evolved. In that era it was pretty straight-laced, just one or two receivers lined up out wide. It was fairly rare to even see something as nuanced as a twin set.

In some ways Biletnikoff's numbers were more impressive than some of the numbers put up today because there weren't three or four other receivers and backs also running routes to take heat off what Biletnikoff was doing. He had to make it happen with his own speed and athleticism– two gifts he had been blessed with an abundance of.

Biletnikoff came to Florida State in 1961 and played for three seasons. He first made it on to the field as a sophomore when he had a modest six receptions for 118 yards and a score in 1962. The next year those numbers jumped to 24 receptions for 358 yards and four touchdowns.

Then in 1964, his senior season, Biletnikoff hauled in 57 passes for 987 yards and 11 touchdowns, all school records in their time. What those figures do not include however are bowl statistics (because they were inexplicably not counted towards a player's statistic for decades). In the '64 Gator Bowl against Oklahoma State he set FSU and Gator Bowl records with 13 receptions for 192 yards and four touchdowns.

So Biletnikoff actually caught 70 passes his senior season for 1179 yards and 15 touchdowns. That's an impressive season in this day and age, it was absolutely eye-popping in the 60's. Biletnikoff was named an NCAA Consensus All-American in addition to being named an All-American by seven different media outlets.

When his career as a Seminole was over he had amassed 1463 yards and 16 touchdowns. And that doesn't include bowl statistics.

He was taken in the third round of the 1965 NFL Draft, 39th overall, by the Oakland Raiders. Biletnikoff played his entire 14 year NFL career in the silver and black, hauling in 589 career receptions for 8974 yards and 76 touchdowns. He was an All-Pro for six consecutive seasons from 1969 to 1974, he was also voted to the Pro Bowl six times.

In Super Bowl XI Biletnikoff hauled in four balls for 79 yards, three of which set up Raider touchdowns. He was named the game's MVP as Oakland beat Minnesota handily by a score of 32-14.

Biletnikoff is on the list more for what he represents than anything else. Even when giving consideration to the different eras, one big season out of any other wide receiver wouldn't be enough to crack the top 25.

But Biletnikoff came first and gave Florida State some national recognition at a point when the program was trying to establish itself. He went on the have a Hall of Fame career in the NFL, they named the award for the top college receiver after him, he's a legend for good reason. He was one of the most athletic players in his day, and one of the greatest NFL wide receivers of all time.

He's also one of the greatest Seminoles.

Fortunately, as I mentioned in the Honorable Mentions section, FSU's football history doesn't date back much further than Biletnikoff's era given that the program wasn't resurrected until 1947 after FSU had gone co-ed again. He is the oldest player on the list, and given his stature in the game, no matter how many more great players FSU churns out, he'll always have a place on that list.

Next up, a key cog in some of the greatest Seminole secondaries ever...