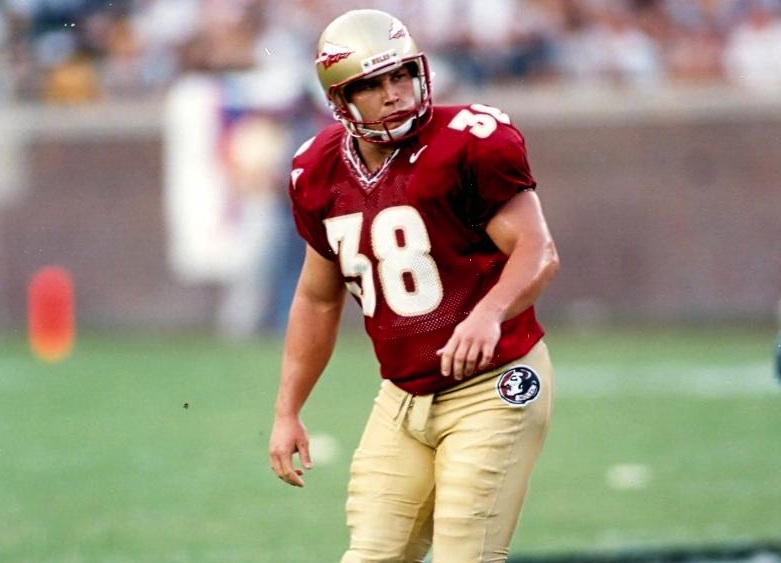 To be inducted to the Florida State University Hall of Fame on September 13, 2013

Sebastian Janikowski likely could have never existed at Jimbo Fisher's Florida State. Of all the colorful characters who have suited up for the Seminoles in the past several decades, few stand out quite like Janikowski did.

A big, bar-fighting, nightlife-loving, Polish kicker with a leg so strong that he regularly put the ball through the uprights on kickoffs.

Before Mike Vanderjagt was drunkenly telling a Toronto paper what he really thought about the Colts or Todd Sauerbrun was fighting people, before Pat McAfee was swimming in the canals of Indianapolis after a night on the town, Sebastian Janikowski was originating the bad-boy kicker act.

Originating it so well in fact that Al Davis– forever enamored with raw speed– took pause during the first round of the 2000 NFL Draft, looking up from his list of 40-times momentarily at a kicker with a booming leg and an in-your-face attitude and said, "I must have that."

Sebastian Janikowski was good enough that you had no choice but to play him. And he knew it.

Born in Poland, the son of a professional soccer player, Janikowski took to soccer from a young age too. After his parents divorced and his father married an American woman and moved to Orlando, Janikowski immigrated to the United States as a teenager despite speaking very little English. He learned the language primarily by watching television and starring on the high school soccer field.

By the time he was ready to graduate he was playing both soccer and football at Daytona Beach Sea Breeze High School. Despite having grown up on the sport his father loved, his ability to kick field goals from beyond 50 yards was what caught the eye of college scouts and he was offered football scholarships by a group of D1 schools.

Whether he actually gained 40 pounds in his first year in Tallahassee or whether the Florida State athletic department was just a bit more honest about his figure in his sophomore year, who knows? While it does add to the legend a bit, it's irrelevent either way. All Sebastian Janikowski needed to do was kick and he did it better than anyone in the country his sophomore and junior years.

Everything else was secondary.

Janikowski was not the starter as a freshman, Bill Gramatica was. Janikowski beat him out over the first half of the season and was named the starter after the Miami game and Gramatica left the school shortly after.

In his sophomore and junior seasons Janikowski connected on 27 of 32 and 23 or 30 field goals respectively, making 89 of his 90 extra point attempts and winning back-to-back Groza awards for the first time in history.

But that's not really the story of why Janikowski was so good, the field goals belie just what a weapon the kicker was for the Seminoles. What really made Janikowski notable (aside from his off-the-field antics) was his ability to shorten and lengthen the field.

That was most visible when he would clear the entire endzone on his kickoffs. He often put the ball through the uprights twice in a row during games, once on the extra point and again on the kickoff just for good measure. Opposing teams would typically have to drive the ball 80 yards on a very good Seminole defense if they wanted to answer a Florida State score because the odds of a returnable kick from Janikowski were extremely low.

In the field position battle you can't overlook how important getting a touchback on a kickoff is. Nowadays the ball comes out to the 25, but before 2012 when it was the 20, that provided a major advantage to a defense. It's hard to drive the ball 80 yards on anyone. Both of the years Janikowski won the Groza the Florida State defense was in the top three in the country in points against.

The field position had a lot to do with that.

He also shortened the field for Florida State offense too, not that those offenses needed a lot of help, but their range with Janikowski extended out to around the opposing 35 yard-line by virtue of Janikowski's leg strength. He hit on four 50+ yard field goals in his three years at Florida State and likely could have connected from farther if allowed to.

On those 1998 and 1999 teams, Florida State's return-men could strike at any time and regularly set the offense up with great field position. Then Janikwoski shortened the field to where on any given drive 30-40 yards could be worth at least 3 points. Afterwards, the opposing offense would need to drive the ball 80 yards to answer.

Even a couple of bar fights in 1998 couldn't keep him off the field. Prior to the 2000 Sugar Bowl (at the end of the '99 season) he announced he would turn pro, then broke curfew a few nights before the game.

"He missed curfew, but I think this is much ado about nothing," Bowden said to SI at the time. "It's really not important."

Not when your kicker can do the things that Janikowski could.

The Polish kicker announced his reason for leaving early was so that he could afford to bring his mother to the United States. Still, a kicker leaving college early to turn pro is highly unorthodox.

But so is a kicker being selected in the first round, which is exactly what happened next when the Raiders selected him 17th that Spring.

He's been suiting up in black and silver ever since. Now headed into his 14th season he has an 80.6 career field goal percentage and a handful of NFL records including a share of the longest field goal in history after connecting from 63 yards on September 12, 2011.

Thanks to rule changes and more media scrutiny than ever, there will likely never be another Sebastian Janikowski in college. But at the end of the 90's in Tallahassee, Janikowski was one of the most colorful characters on arguably the greatest Florida State team of all-time.

Next on the countdown we set the clocks back...