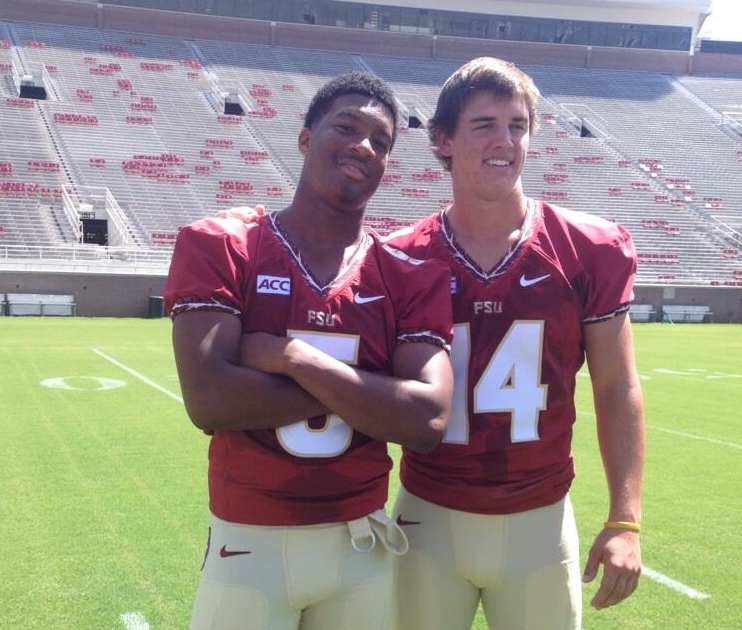 Yesterday's media day highlighted one undeniable major fact heading into the Florida State season. Jameis Winston may not be the starting quarterback, but he is already more or less the star of the team.

If you haven't had a chance to check out the Winston article from this morning's paper, I wrote that Winston's star may be surging too quickly though.

To elaborate a little, Jameis Winston's star was essentially born well before he ever even stepped foot on Florida State's campus, back when he featured in ESPN's Elite 11 and became a national recruiting sensation. Wherever Jameis Winston went he was going to be a star, that much was almost assured by the end of his junior year of high school.

Since then that star has surged, Winston has won the fan base over before he's ever played a snap. That's not to say a fanbase can't turn, but right now, Winston is FSU's favorite son. Unfortunately Winston's arrival is likely a little earlier than planned and it's going to force Florida State into a really difficult position with Jacob Coker.

Coker really cannot win. Even if he can earn the job in camp, he faces unbelievable uphill odds. Jameis Winston's leash will be long- especially with the fanbase. He has already been ordained as the future of the program and he is going to be afforded some growing pains.

Coker will have none of that. Every pick, every incompletion and every mistake will be scrutinized and remembered as fans and media bring up Jameis Winston more and more. He will hear boos well before Winston would. He will be judged on the nearly the same criteria that you would judge a senior quarterback on because the Florida State fanbase has already dubbed Jameis Winston the future and they want to see him now.

The unfortunate truth for Jacob Coker is that if he wins the FSU starting job, he may have to be near perfect right out the gate (and sustain it for a while) or else he may never be able to win over his own fanbase.

It's not fair. But it's the truth. If things had likely gone to plan, Winston would have backed up Coker for a couple of years before taking over. But Winston's star- some mercurial combination of his charisma and athleticism- may have made that impossible.

Unfortunately the best comparison for it would be that Winston's star is like a tropical storm on the brink of becoming a hurricane. There's nothing anyone can do to stop it or hold it back, Hurricane Jameis is arriving on his own time.

I don't think you're supposed to write that about a Seminole though...