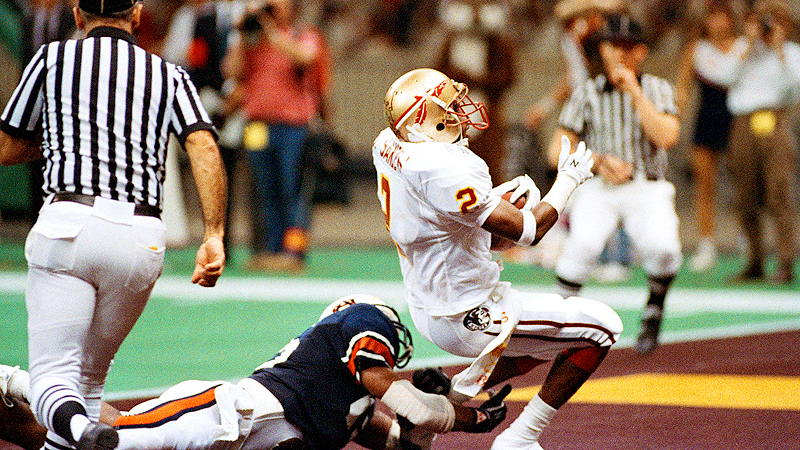 Inducted into the Florida State University Hall of Fame in 1994

Was there ever any doubt? Deion Sander or "Primetime" is an NFL Hall of Famer and the greatest cover corner in the history of football in the eyes of some. Deion is not just a football player, not just a Hall of Famer, he's trascended both of thsoe titles to become a bona fide celebrity.

Whether it's from his commercials, reality shows, working on NFL Network, undertaking a broad range of philanthropic endeavors or the virtual library of highlight-reels he assembled over the course of his career, almost everyone is familiar with Deion Sanders. The man is a true superstar and without a doubt the Greatest Florida State Seminole of all-time.

Before Jameis Winston took part in a Spring practice and then pinch hit in a baseball game, as a true freshman Deion Sanders once won a 100 and 200 meter sprint at a track event and then started in the Seminole outfield a few hours later. Sanders once played the first game of a double-header, ran a leg of a 4X100 relay and then returned to play in the night cap with the baseball team.

Sanders is as much a part of FSU lore as any player to ever don the Garnet and Gold. The stories of his athleticism are a part of Seminole mythology. Legend has it the man once ran a 4.4-40 in Timberland boots. He was blazing fast, could cut on a dime and had absolutely no interest in letting opposing receivers accomplish anything around him.

Born in Fort Myers in 1967, Sanders had obscene athleticism from a young age and grew into a highly-touted recruit playing three sports (football, baseball and basketball) at North Fort Myers High School.

He took just three college visits, crossing Georgia off the list quickly and coming away from Gainesville thoroughly unimpressed. He ended up at Florida State where he traded basketball for track and was quickly on his way to becoming one of the best to ever play at FSU.

For four years Deion Sanders shut down opposing receivers in the Seminole secondary. He notched 186 tackles over that time, but more impressively came away with 14 interceptions while also breaking up 27 passes. He earned back-to-back Conesnsus NCAA All-American honors in 1987 and 1988 while also being named to 21 different All-American squads. In his senior season he won the Thorpe award (given annually to the nation's top defensive back).

And Deion's stats are a bit misleading too. 14 interceptions count. Three from bowl games do not. His official 14 is still good enough for third all-time in Florida State history but really he's second. But that number is low anyway because teams just stopped throwing on Sanders after a while. That was Deion's specialty, he didn't just pride himself on shutting down a team's ace receiver, he could more or less close off a half of the field when he was on his game.

And Deion was almost always on his game.

Three of Sanders' 14 interceptions went as touchdowns and he scored another three times on punt returns. Not only was he capable of shutting a passing game down, he was a threat to score from anywhere on the field if the ball came his way.

Sanders had everything you look for in a legend. He had the stats, he had the swagger and he shined brightest in the biggest moments, like when he intercepted a pass late in the 1988 Sugar Bowl to seal a win over Auburn.

He even had the charisma. You can't go by Primetime if you don't. Sanders was never short of some good trash talk or a great one-liner. He once said to Steve Marriuci that at FSU he majored in eligibility.

As funny as that sounds, there was little doubt from the moment most folks laid eyes on Sanders and his athletic gifts that he was destined for greatness in the world of sports.

Whereas Charlie Ward would later be forced to pick between one sport or another in the pros, Deion played both. In 1989 as a rookie he homered and then scored a touchdown in the same week. That had never happened, hasn't happened since. He's also the only man in history to play in both a Super Bowl and a World Series.

Sanders best sport was always football though. Despite once hitting .302 for the Atlanta Braves and leading the NL in triples in 1992, what he did on the gridiron dwarfed what he accomplished on the diamond.

Sanders played 14 seasons and hauled in 53 career picks- nine of which he returned for scores. Between interceptons, kick returns and other scores, he ended his career with 22 touchdows. Eight times he was an All-Pro and eight times he was a Pro Bowler. He won two Superbowls and is the only player in NFL history to record both a reception and an interception in one.

He was a two-time defensive player of the year and was inducted into the NFL and College Football Hall of Fames in 2011.

Deion Sanders is the greatest Florida State Seminole of all-time.