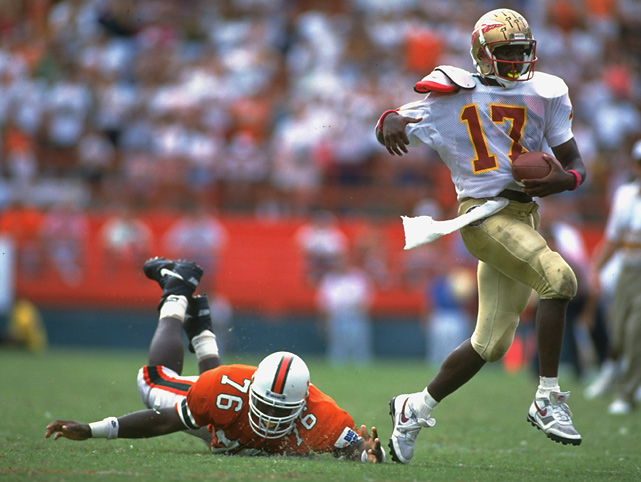 Inducted into the Florida State University Hall of Fame in 1999

The name "Charlie Ward" has power amongst the Florida State fanbase. It's almost magical at this point 20 years removed from Ward's last snaps as a Seminole. Ward is a part of Florida State mythos, a part of the school's lore. His memory has become larger than life.

That's what happens when you're the kind of transformational player Ward was at FSU, they deify you.

After several years of knocking on the door, Ward was the guy who piloted Florida State to prominence. He was one of the first dual-threat quarterbacks in the current iteration. A talented thrower who could terrorize opposing defenses in the air or on the ground with his legs. This wasn't an option offense, this was an offense that could attack vertically. The questions that have been turned over in defensive coordinators' minds for a couple decades by now, were just being asked back then. Being asked about Charlie Ward.

Do you blitz him or try to make him throw to beat you? Do you key on Ward himself or try to take his weapons away? How do you defend a player who doesn't fit into any of the molds that had been cast up to that point? Sure there had been mobile quarterbacks before and option quarterbacks before. But this one felt different.

This was Charlie Ward.

Born in 1970 in Thomasville, Georgia, Ward grew up playing football, baseball and basketball. He accepted a scholarship to attend Florida State in 1988 but didn't officially qualify until the following season in 1989.

By the 1992 season Florida State was in its first year in the ACC and Charlie Ward was in his first season as the team's starting quarterback. Ward threw for 2647 yards that year with 22 touchdowns and 17 picks. He completed 55.9 percent of his passes that season and Florida State went 11-1, falling to Miami in the second Wide Right game and beating Nebraska in the Orange Bowl.

The next season Ward and the Seminoles broke through.

Ward showed dramatic improvement from his junior season, increasing his completion percentage nearly 15% to 69.5. He decreased his interceptions from 17 to four and threw 27 touchdown passes. He also added over 300 yards and four touchdowns on the ground. All in all 3032 yards with 27 touchdowns and just four picks was the best season any Florida State quarterback had ever had to that point. It's still up there to this day too.

Ward won every award he was nominated for in 1993. Earning selections to nine different All-American teams along with consensus NCAA All-American honors, while also winning the Davey O'Brien trophy, the Maxwell award and the first Heisman trophy in Florida State history.

FSU won their first national title that year too, finishing 11-1 and defeating Nebraska in the Orange Bowl once again to seal the deal. After nearly 20 years at the helm, Bobby Bowden finally had the Seminoles on top of the college footaball world and Charlie Ward was the guy who got them there.

But Ward's athleticism extended far beyond the football field. He was an integral part of three consecutive NCAA Tournament teams in basketball, playing guard and averaging 8.1 points per game over the course of his career.

In fact, it was basketball that Ward opted to turn pro in. After NFL teams were scared off by Ward's indecision over which sport to play (and his pronouncement that he would not play football unless drafted in the first round), the Knicks selected Ward in the first round of the NBA draft and he went on to play an 11-year NBA career.

But stories of Ward's athletic prowess extend beyond even the hardwood and the gridiron. Despite never playing an inning of baseball at Florida State, Ward was drafted twice by the Major Leagues in 1993 and 1994. In 1994 the New York Yankees took him in the 18th round.

He also was an avid tennis player, going deep into the 1994 Arthurt Ashe amatuer tennis tournament.

In his time at Florida State Ward was also highly involved in student government, even serving as Student Body Vice President as a senior. He also was integral in helping a young Warrick Dunn in the months after his mother's murder during his first year at FSU. Dunn was a Florida State signee and Ward approached Bobby Bowden about mentoring Dunn when the freshman tailback first arrived in Tallahassee.

Ward, along with Bowden and the rest of the Seminoles helped Warrick flourish.

As a true freshman Dunn featured on that 1993 National title team, earning All-Freshman honors and eventually becoming the all-time leading rusher in Florida State history. By that time though Ward was well into his career as a New York Knick.

When you look back at the history of Florida State University, not just in sports but as an entire institution, there are few students in the school's history or athletes in the history of the athletic program that can compete with the impact Ward had on FSU. He was the first Heisman, the first National Title winning QB and he's still number one in the hearts of many Seminoles fans.

Without a doubt Charlie Ward is one of the greatest Florida State Seminoles ever- the greatest some would argue.

But we still have one playr left in our countdown...