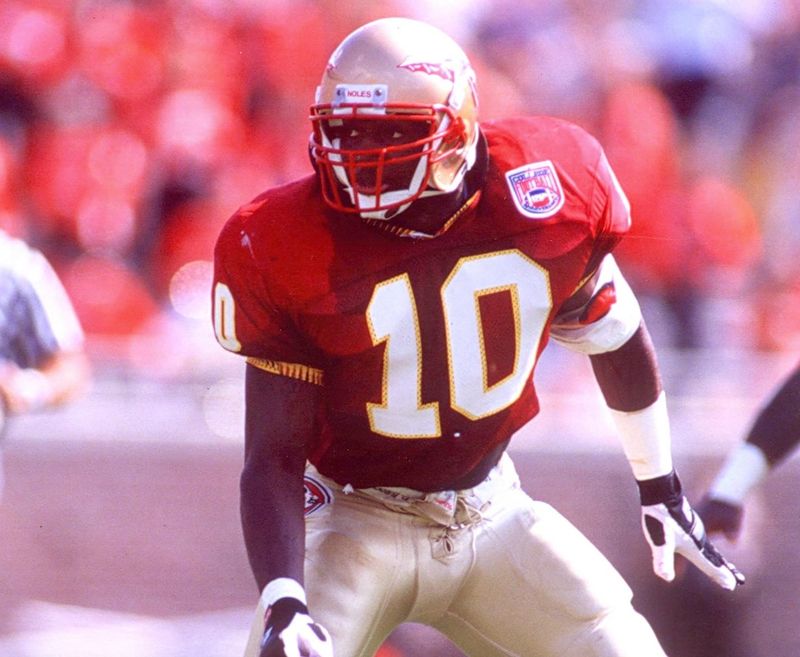 Inducted into the Florida State University Hall of Fame in 2000

There's a very good chance that next year Florida State will double its NFL Hall of Fame total. Fred Biletnikoff and Deion Sanders are currently the lone Seminoles in Canton. OT Walter Jones has a good chance to be inducted in his first year of eligiblity next season.

Derrick Brooks is more or less a slam-dunk.

Think about all the players Florida churns out that go on to become great collegiate athletes, great pros, even Hall of Famers. Derrick Brooks is considered one of the best ever to come out of that group.

He signed at Florida State where as a 6'0 205-pound incoming freshman he assumed his best shot to go to the pros would be by converting to defensive back.

And he did spend his first season in Tallahassee at safety. He notched 22 tackles in reserve duty on the 1991 Seminole team. But after his freshman season, Mickey Andrews and Bobby Bowden had a different idea about how to best use Brooks, instead optiong to ulitlize his speed and ability to deliver a vicious blow at outside linebacker.

The rest is history.

Brooks went on to become a three-time All-ACC first team selection over the three years he started at linebacker for the Florida State defense. As a sophomore Brooks pulled down 98 tackles and 3.5 sacks playing alongside future NFL first-round pick Marvin Jones. He earned All-Sophomore honors from the AP and quickly established himself as one of the top defenders on a very good FSU defense.

The next season, with Jones now in the NFL, Brooks flourished as the anchor of Florida State's first national championship defense. He lead the Seminole defense for both the 1993 and 1994 seasons, notching 77 tackles each year, earning 17 selections to various All-American teams over those two seasons and achieving back-to-back consensus NCAA All-American honors.

The numbers lie when it comes to Brooks though.

With some players you can open up an old media guide or a stat-book and the numbers just pop out at you. Marvin Jones is a great example of that, he made so many tackles in three years that you couldn't help but understand the ways in which he affected the game.

Brooks is different because there is no statistical measurement for how disrputive a player can be.

If there were he'd likely be FSU's all-time leader. There's a reason a guy can win back-to-back All-American honors at linebacker without ever going over 100 tackles or 10 sacks in either season. It has to do with sleepless nights spent by offensive coordinators and the ways in which opposing teams had to scheme around number 10 just to have a shot at moving the football against Florida State.

Put it this way, nobody was trying to go anywhere near Derrick Brooks' side of the football field.

He could tackle, he could get to the quarterback and his coverage skills were impeccable. Over the course of his final two seasons Brooks broke up 11 passes, intercepted five and scored three defensive touchdowns.

He was also a stud in the classroom, earning All-American academic honors as a senior and continuing to do charitable work with an academic mission to this day.

The Tampa Bay Buccaneers drafted Brooks 28th overall in the first round of the 1995 NFL Draft and he played his entire 14-season career in Tampa, notching 2118 tackles, 13.5 sacks and 25 career interceptions while helping the Bucs to the first Super Bowl championship in franchise history. Brooks earned Pro Bowl honors 11 times in 14 years and was named an All-Pro nine times.

Next year he will likely be one of the first two or three names read off when the NFL announces its Hall of Fame class for 2014.

But much like his teammate- both in Tallahassee and in Tampa- Warrick Dunn, just discussing football would be a disservice to the other things Brooks has accomplished away from the game. Brooks was named the NFL Walter Payton Man of the Year in 2000 for his extensive philanthropic work off the field.

That work continues to this day.

The Derrick Brooks foundation or "Brooks' Bunch" has been taking local kids from Boys and Girls clubs on travel excursions since Brooks' third year in the league. They focus on providing educational opportunities by using a "mobile classroom" model and annually take children on trips across the contintental US and to Africa.

Brooks' focus on education has also expanded to other avenues as well, including the co-founding of a collegiate prep high school in Tampa in 2007.

Brooks was recently honored by Governor Rick Scott with the state's "Great Floridian" award and was named a member of the Board of Trustees at FSU in 2003.

On and off the field, Derrick Brooks is one of the greatest Seminoles of all-time.

Only two to go, who's next? Can you guess it?