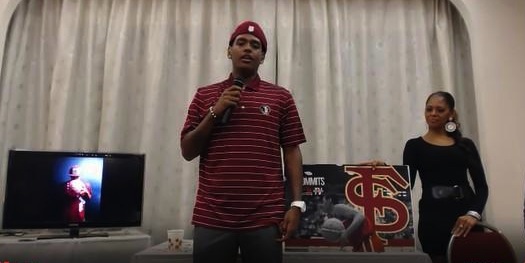 Xavier Rathan-Mayes' first season at Florida State is over before it ever even got started. The Seminoles' top recruit will not be eligible to play even a single minute during the 2013-14 season as a result of the NCAA reportedly not accepting an entire grade level's worth of classes from his sophomore year of high school.

"Following a review by the NCAA Eligibility Center, it was determined that some of the coursework Xavier completed during his high school enrollment could not be used to satisfy NCAA Division I initial-eligibility requirements," the NCAA said in a statement received by Florida State.

"The NCAA has allowed Xavier to enroll immediately at Florida State and receive athletics scholarship, however, he will not be permitted to practice or compete during his first year of enrollment."

This sounds like a rough deal on the part of the NCAA. Unfortunately, this time it really isn't. True, the NCAA moves with startling quickness on matters like this while taking several years to sort through much more serious allegations (like, for instance, the ones currently looming over the Miami Hurricanes' season which involve illegal benefits, a renegade boosters and the words "sex boat party"). But academic integrity is important and in this case it was neither FSU, nor the NCAA who are in the wrong.

Instead the fault lies with a system built around prep basketball that allows AAU coaches to form "high schools" that are essentially little more than glorified basketball camps. Rathan-Mayes ran into that buzzsaw his sophomore year of high school when he attended a school called, "Christian Faith Center Academy" under the auspices of infamous AAU coach Ro Russell.

"A source says the NCAA did not accept a full year of credits that Xavier Rathan-Mayes took at Christian Faith," reports Evan Daniels of Scout.com.

Per Rathan-Mayes in a March 2012 interview with a Canandian television program, the school had no set study schedule and no academic supervision.

"We were basically on our own," Rathan-Mayes said. "Yes, basketball was everything. That's all we did. School was there, but it was basically basketball, nothing else."

Now, unfortunately for Rathan-Mayes, that year has caught up to him in a vicious way and Florida State will be without one of their most promising incoming young players for the entirety of the upcoming season. The Seminoles have exhausted their appeals process on XRM's behalf and both parties are no resigned to XRM making his debut during the 2014-15 school year instead.

It's worth noting that freshmen typically don't make a great impact in Leonard Hamilton's system, but Rathan-Mayes came highly touted and at the very least some of the excitement surrounding the upcoming FSU basketball season has been dimmed as the school year gets kicked off.

You can catch the segment on Christian Faith Center Academy starting at 31:30 in the clip below: