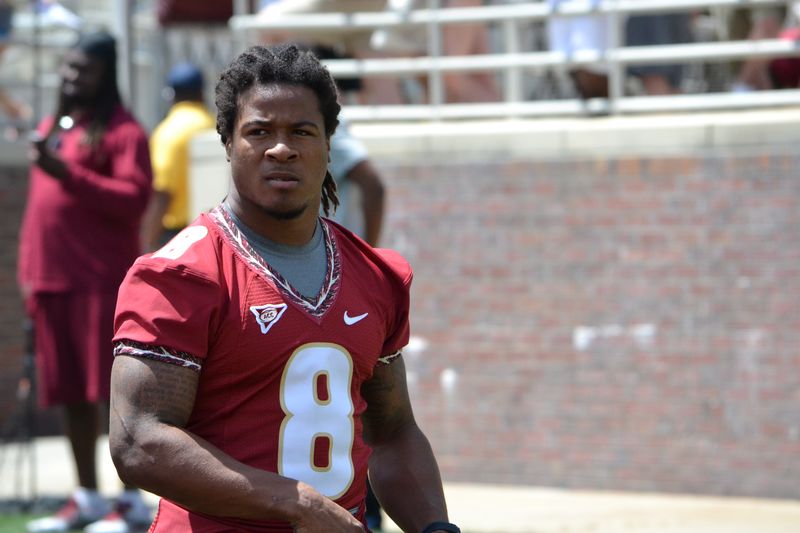 To be honest, I intended to write this before things got rolling with the college football season on Thursday evening, but alas the allure of North Carolina-South Carolina was too strong and I did none of that.

So if you'll forgive me for offering these bold predictions nearly a full weekend into the season, here are 13 things I predict will happen during the 2013 college football season. Most of these are Florida State-related (since, after all, that's the beat I cover), and should be excused any scrutiny for their tardiness, the last few though, criticize away...

1.) Kenny Shaw will have a break-out year

Kenny Shaw has never caught more than 34 passes, gained more than 534 yards or scored more than four touchdowns in a season. All three of those things change in his senior year. I already expected Shaw to stand out in 2013, but with the WR corps now considerably thinned out, Shaw is positioned even better to have a break-out year. With questions at tight end and a new QB, look for Shaw's fearlessness over the middle to make him a favorite target of Jameis Winston.

Nobody has run for more than 1,000 yards in a season at FSU since Warrick Dunn in the late 90's. I think that changes this year. With Mario Pender out for academic reasons, FSU will have just three scholarship tailbacks on their roster. While James Wilder Jr. grabs more of the headlines for his size and his personality, Devonta Freeman has been the more consistent back early in his career. Freeman lead FSU in rushing as a freshman and came within 40 yards of it last season too. This season, with more carries likely to come his way, look for Freeman to end one of FSU's least celebrated streaks.

3.) This will be the best Miami-Florida State game in a decade

Ok, so maybe this isn't so bold. But I think UM-FSU has a shot be one of the games of the year when we look back on 2013. FSU has been on the rise for the past several seasons, but heavily discounted by the Florida State faithful is the progress Al Golden has made at Miami. The Canes are loaded on offense and if their defense is even remotely improved Miami will challenge for the Coastal division of the ACC. They always give FSU a great game, but it's more personal than usual this year and it should make for a great game. If anything, the mind games between de-facto FSU OC Jimbo Fisher and former FSU-OC-turned-UM-OC James Coley will make this one an interesting game.

4.) Jalen Ramsey will be the Defensive rookie of the year

I'm not sure I've seen Jalen Ramsey roll with the two's since he got to Tallahassee. A five-star verbal commitment to USC, Ramsey flipped days before national signing day and headed to Tallahassee instead. Since arriving, he's been working with the first team and garnering compliments from his coaches on a regular basis. He's currently listed behind Lamarcus Joyner on the depth chart, and should see plenty of playing time in 2013.

5.) Florida State will have another excellent draft class

FSU had more players drafted than any other school last season, and while I wouldn't necessarily wager they'll repeat that this year, I'd be comfortable asserting they'll be amongst the top five, probably top three. The Seminoles' defense is littered with future pros and there are several players on offense (Rashad Greene, James Wilder Jr.) that could be drafted if they leave early too. All in all, don't be surprised if somewhere between seven to ten 'Noles hear their name called next Spring at the NFL draft.

6.) Tim Jernigan will see a significant spike in national attention by year's end

Florida State fans have known Tim Jernigan was something special for the past two seasons, this year the nation will discover it too. Alabama has produced more than its share of first round defensive tackles the past few years, with Pruitt having been recently plucked from the Bama/Saban coaching tree, Jernigan will get some hype on the basis of that fact alone. His play will back it up though. If he stays healthy, Jernigan might have a tough decision to make come January.

7.) Florida State may not be past a QB Crisis

May not be? That's not even a prediction, that's more of a vague hypothetical. You're right, and I'm offering it anyway. I think Jameis Winston will have enough leash this season that only injury or a blowout will be enough to get Jacob Coker into a game. If an injury does happen though, look out. Not because Florida State can't win without Winston, but because it's possible it could never miss a beat without him. Both QB's are legitimately talented signal callers that would be day one starters at probably 100 other schools right now. Winston won the fanbase over largely due to the fact Seminole fans never saw Coker at full strength. If they do, and he lights it up, Jimbo Fisher inherits a media-and-fan-driven headache.

This is in no way, shape or form a slight at Pryor's replacement, Chad Abram, it's simply pointing out that a player of Pryor's versatility is rare. Pryor made the Jaguars this past weekend, and as excited as Seminole fans will be to see him on Sundays they will miss him on Saturdays. Pryor was an underrated blocker who was able to draw defensive attention for his ability as a ballcarrier and receiver. Until a player lining up at fullback can prove he's capable of the same, opponents have one less thing to gameplan for.

9.) PJ Williams will lead the team in interceptions

Admittedly this is more of a hunch than anything based on hard empricial data, but Williams is a ball-hawking sophomore who won the week-one start at corner. He had a great Spring and is by all accounts one of those players that just has exceptional football instincts. Whether it's in practice or in scrimmages, you always hear about Williams making a play. If that translates on to the field, look for him to lead the team in picks.

10.) At Wake Forest, the week after Miami, will be the 'Noles most unexpectedly difficult game

Wake Forest has been a team that has given FSU fits over the past decade, especially on the road. A week after a tough game against Miami, this game has trouble written all over it. If FSU drops the game to the Canes, expect them to go to Wake focused and pick up a win. If FSU beats the Canes, the next week at Wake has all the makings of a classic trap game.

11.) Johnny Manziel will end up getting injured

All of the hub-bub over Johnny Football and his air-autographs, money sign gestures and the whole preseason circus that followed him into Saturday will be silenced for at least a few weeks when Manziel gets hurt. This isn't because I wish Manziel any ill-will, not because I'm cynical either, I'm just not feeling good about that odds that a 6-1 200-pound QB can scramble around the SEC like he does for two straight seasons without taking a lick that at least knocks him out of commission for a week or two. I think Manziel will end up getting hurt and ESPN will have to find a new person to talk about non-stop for a few weeks.

Admittedly, VT-Bama confirmed this for me, but Alabama won't three-peat. They lost too much on offense along their line and - despite unparalleled success on the recruiting trail since Nick Saban arrived - one or two SEC defenses will be good enough to pressure the Tide offense and knock off Alabama this year.

I don't think there's an SEC-alpha this year like there was the past few seasons (see above), each team has their issues this year. Meanwhile, Ohio State likely skates by to an unbeaten season while the SEC canabalizes itself. Whether you think it's the Buckeyes or maybe even a team from another conference, I think the SEC's streak ends in 2013.