The Jameis Winston Era Is Here, Deal With It 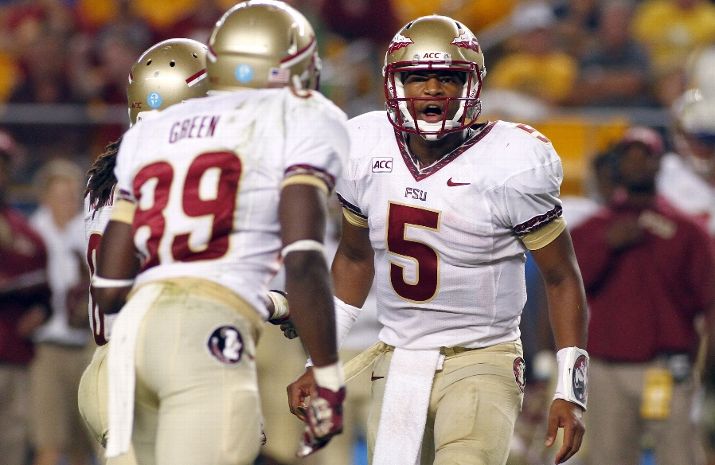 "A prophecy has been fulfilled," Lamarcus Joyner said after Florida State's 41-13 win over Pittsburgh on Monday night.

Florida State head coach Jimbo Fisher delayed it as much as he could.

He didn't name Jameis Winston his starter after he lit up the annual Garnet and Gold game. No, 12-for-15 for 2 TD's wasn't enough, Fisher wasn't ready to name a starter.

He didn't name a starter heading into August's preseason camp either, he let "competition" play out. And though there are at least 100 other schools that would start Jacob Coker from day one, all the redshirt sophomore really did was bought FSU's fourth year head coach time.

But the Jameis Winston era is here now. Already ESPN is building Winston into its news cycle. He's climbed on to several Heisman lists. Media requests will be up. National interest just spiked. Florida State is going to have to deal with it.

Since he was a young child Winston has seemed destined for greatness and it has always been on his own terms. Playing with the older kids in pee-wee football, brow-beating senior receivers as a freshman in high school, age means nothing to the Seminoles' redshirt freshman starting quarterback and he stated that aggressively on Monday night.

Try an experiment if you have some free time. Play 100 games of EA Sports' NCAA Football franchise at the easiest setting, I'll let you pick which year, and tell me how many times you go 25 for 27. Winston threw for 356 yards on Monday night, he had four touchdown passes - three to Nick O'Leary - and scored five times total. It was a videogame night. It was absurd, freshmen don't do that. Johnny Manziel missed seven passes in his debut, didn't even throw a touchdown.

Winston had the best debut in Florida State Seminole history on Monday night. And that's one storied history.

The 6-4 227 QB and the Seminole offense suffered just one setback on Monday. Their initial drive stalled out on a Kelvin Benjamin sweep play that failed to convert a third and short near midfield.

They proceeded to score on the next seven consecutive drives.

EJ Manuel - chosen in the first round this past April by Buffalo - handled the Florida State offense the past couple of seasons with aplomb, but if you squinted hard enough on Monday night Winston's five looked a lot like Manuel's three. Better at times. The offense ran so smoothly that you could hardly tell there had been turnover.

The offense ran well enough that one day Manuel's biggest legacy at the program could be as Winston's mentor.

FSU looked impressive on Monday night, and while it's early, and while it's important not to get too excited about Jameis Winston... it would be kind of hard to begrudge Seminole fans an extra fist pump or two.

Jameis Winston looked like the real deal on Monday night.

And FSU has plenty more of that to look forward to in the future.