Defense Shines, But Winston Steals the Show Against Maryland 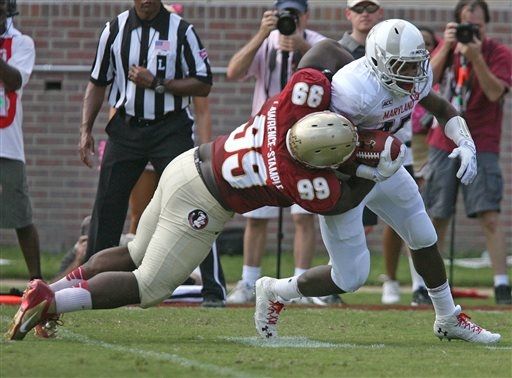 This is not an article about Jameis Winston.

Let's just go ahead and get that out of the way right now. Florida State's mercurial quarterback lit the scoreboard up again on Saturday, notching career highs in passing yards and touchdowns while helping Florida State roll up 63 points - the most on a conference opponent since 2000.

The story on almost any other day - especially at Florida State where defense is king - should be the number on the other side of the scoreboard, that goose egg. Florida State's defense pitched its first shutout against a ranked opponent since Georgia Tech back in 1997 today, but that's not the story.

Not at Jameis Winston's Florida State.

Today the story has to be Winston, who once again put up videogame numbers while playing on a national stage.

But let's take a minute to look at that defensive performance anyway. I'll have plenty on Winston throughout the week, throughout the season and probably for the next couple of years. For now though, give credit to Florida State's defense for looking the best they have all season.

“[It's] hard work paying off, I mean I love the guys that I’m around, that just shows me that we’re all playing together and we’re playing with a purpose out there," said senior LB Telvin Smith. "It’s just great when the whole game you can hold a team to no points. Obviously they’re going to have yards and things like that but when the one’s got off the field we’d held them to 14 rushing yards.

"Just to come back from a week like last week when they were rushing the ball to say ‘ok, this is the statement that we’re making’ it’s just a tremendous feeling of joy.”

Unfortunately for Florida State's defense that statement was overshadowed by the one Winston made - at least from a national standpoint - but the Seminole defense certainly served notice to the ACC today that they have begun to arrive.

Last weekend the Seminoles were gashed for 200 yards rushing and 34 points by a BC team many felt was overmatched. This week - after fixing those issues during practice - the Seminoles looked like a dramatically different team.

“We really weren’t thinking about last week. Last week was last week. We were mainly just focused on coming out here this week and everybody doing their part and just trying not to be superman," said junior DT Tim Jernigan. "We did a great job at our gap assignments and the way we used our swim techniques, we knew that they were going to try to trick us up a little bit and run the hurry-up and we just predicted everything well."

FSU held Maryland to 234 yards - including just 33 on the ground - and no points. The closest the Terrapins got to scoring was when a 51-yard field goal bounced off the uprights. Stefon Diggs - who was 8th nationally in total yards last season - accounted for just 29 on Saturday. CJ Brown was knocked out of the game on a vicious hit.

“I think they played with urgency," said head coach Jimbo Fisher after the game. "They took on blockers well and our eye discipline was excellent. We kept our eyes and this game here was harder to do that with than last game (because of) a lot of motions and the zone reads and pulls.

"Our eye discipline was excellent which allowed us to make good decisions about what we were going to do. Allowed us to play with our athleticism and then we were physical and tackled well.”

Part of what helped Florida State was the return of Mario Edwards at defensive end. The sophomore had missed two games with a hand injury before returning to provide solid pressure against Maryland. Senior linebacker Christian Jones also played outside at linebacker during the game - much as he did as an underclassmen - allowing Terrance Smith to get on the field and play in the middle.

“We practiced really well this week," said Edwards. "It was probably one of the best [weeks of] practices that we had all season and we just put what we did in practice into this game.”

Right in time too.

Florida State has the week off to rest up before travelling to Death Valley to take on no. 3 Clemson on October 19. Now FSU just needs the defense that showed up today to make the trip to South Carolina in two weeks.