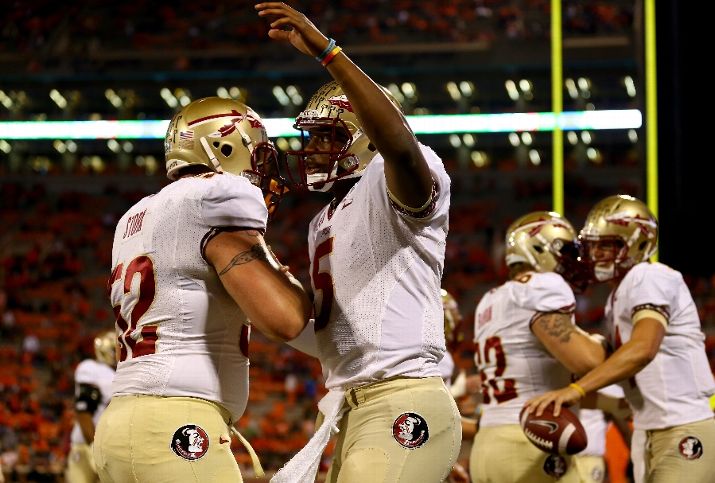 Florida State fans can't be disappointed with how this game has gone so far. The Seminoles are beating the Tigers on both sides of the ball right now and Jameis Winston -- despite an INT early in the 2nd quarter -- is outplaying Tajh Boyd.

FSU wasted no time getting to work in this one, causing a fumble on their first defensive play of the game, then punching the ball in for an early touchdown three plays later on a 22-yard pass to Kelvin Benjamin.

After forcing a stop on the next series FSU added a field goal, and then a touchdown on a 37-yard fumble return by Mario Edwards after Lamarcus Joyner blindsided Tajh Boyd.

It was all Florida State early with the Seminoles jumping out to a commanding 17-0 lead with about three minutes left to play in the first quarter.

But momentum is a fickle thing and Clemson wasn't going to just roll over. The Tigers scored on an 11 play, 65 yard drive at the tail end of the first quarter and headed into the 2nd quarter looking to pull even closer. They got their opportunity too -- in the form of a Jameis Winston interception that was returned to midfield.

The pick was a bad miscommunication. Kenny Shaw ran a post and Winston threw an out. The Clemson defender that was beat inside had no problem making a play on the ball and a late hit out of bound by Devonta Freeman set the Tigers up with great field position.

But Clemson failed to convert, instead punting the ball three plays later after losing six yards on the possession.  The Tigers got the ball back again at midfield, but once again failed to score and gave the ball back to Florida State again deep in Seminole territory.

That's when FSU retook momentum. A 95-yard drive that culminated in a 72-yard touchdown pass from Winston to Rashad Greene put the Seminoles up 24-7 and gave FSU complete control.

Tajh Boyd entered this game sporting considerable hype and promising Heisman prospects. As of halftime that's all on hold. I'm not going to be too pointed in my criticism of a college athlete but Boyd has looked flustered and uncomfortable throughout the first half of this football game.

He's missed receivers low, he's thrown into double and triple coverage and even his touchdown pass was thrown behind Sammy Watkins. Twice Clemson had the ball to start a drive at midfield or inside Seminole territory in pivotal moments and both times Clemson failed to score even a single point.

Then down 24-7 with Clemson driving Boyd tossed a pick to Lamarcus Joyner and set up a Florida State field goal to make it 27-7 heading into the half.

If Clemson wants to come back, they'll need a much better performance out of their redshirt senior quarterback.

FSU has dominated this first half. Jameis Winston did throw a pick and there have been spots where the Seminoles made mistakes, but they have outplayed Clemson through 30 minutes tonight.