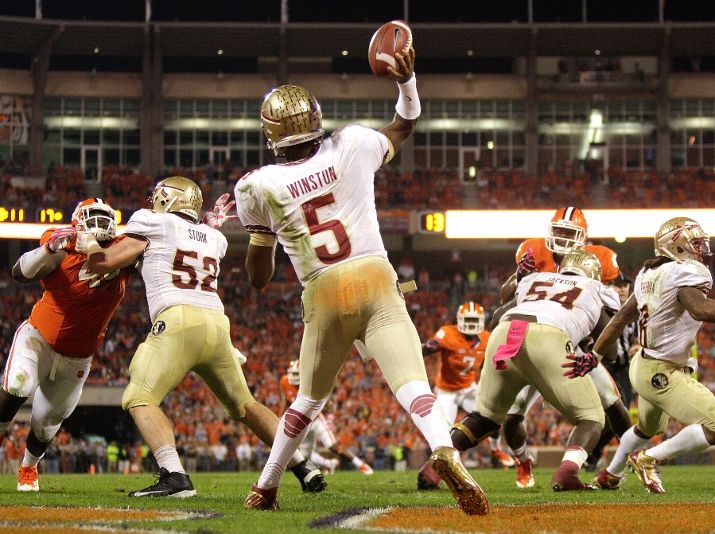 Tonight Florida State served notice to the rest of the country.

Alabama will still be ranked number one tomorrow and Oregon is still going to be number two. But make no mistake about it -- Florida State is going to start getting first place votes.

They deserve them too.

The Seminoles took the third-ranked Clemson Tigers to the woodshed on Saturday night. From the first play of the game -- when Telvin Smith caused a fumble that set up a Florida State touchdown -- to the final gun, Florida State dominated this game.

The stadium was loud, the Tigers came out amped and then Florida State punched them right in the mouth. And then they did it again. And again. Until this game was over midway through the third quarter.

Nobody saw this coming. Nobody, except maybe the Seminoles.

“Our team motto is that if we play our game, we don’t think that we can beat," said Jameis Winston on Wednesday.

On Saturday night Florida State played its game and they didn't look like they could be beat. And for a team that lost 11 players to the NFL draft and started the season with a redshirt freshman quarterback, the Seminoles' best football could still be ahead of them.

Winston looked the part of a redshirt senior at times against Clemson. He finished his day 22/34 for 444 yards, three touchdowns and a pick. The pick was one of the only mistakes Winston made though, the rest of the time he was the walking embodiment of poise.

Before tonight there were questions about whether Jameis Winston was for real. Nobody discounted he would one day be one of the nation's best quarterbacks. After tonight there's no more doubt. Winston made a resounding national statement.

Last year Johnny Manziel went to Alabama and squeaked out a win. On Saturday night Jameis Winston visited the third-ranked team in the country, threw for a career high in yardage and his team crushed an opponent that many had picked to contend for a national title.

On the other side of the ball, Florida State's defense made Tajh Boyd look like a redshirt freshman for most of the night. Boyd can probably thank the 'Noles for ending his Heisman candidacy -- or at the very least dropping him to the bottom of the list.

Boyd never looked comfortable. FSU got in his face early and often and the effects of the continued pressure showed more and more throughout the evening. He finished the game 17/37 for 156 yards, a TD and two interceptions. He also coughed the ball up when Lamarcus Joyner blindsided him on a sack. For as bad as it looked on Boyd's end though, a lot of the credit needs to go to Florida State's defense.

Christian Jones -- who looks much more comfortable rushing off the edge -- was especially disruptive, Jeremy Pruitt drew up plenty of pressure on blitzes with defensive backs and linebackers and Telvin Smith and Lamarcus Joyner both had extremely impressive games.

This was the best FSU's defense has looked all season and it came against the best offense they're going to face this year.