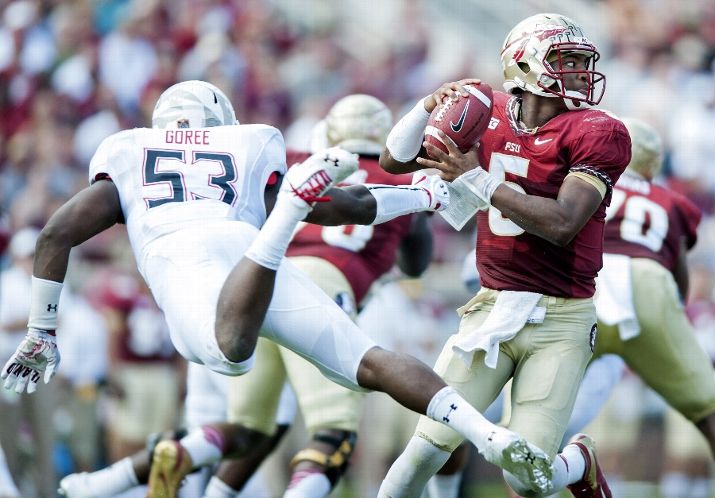 The second half of this game became the Jameis Winston show as the redshirt freshman signal-caller made a national statement against a ranked opponent and FSU won 63-0.

Put it this way, the Jameis Winston hype is about to explode.

Maryland entered the game with the third-ranked scoring defense in the country, giving up just a hair over 10 points per game. Jameis Winston either didn't realize that or the Terps weren't quite as strong as advertised because a minute into the 4th quarter Winston was resting comfortably on the bench with a career day in hand and his Seminoles up 49-0.

Florida State's offense started with a touchdown and then sputtered out in the first half, but - as is becoming commonplace - Winston came on at the end of the half, leading two scoring drives to put the Seminoles up 21-0.

Then FSU scored on their next four consecutive possessions to start the second half and push the lead out to 49-0 by the time Winston made his exit. The Seminoles have now scored a touchdown on the final drive of the first half in all five games. Perhaps more impressively, FSU has gone on hot-streaks where its offense has scores on six straight drives in all five games this year as well.

When the Seminoles have gotten going on offense, they've yet to play a defense that could stop them.

But the real story was Winston.

The redshirt freshman was poised and accurate throughout the day on Saturday and the Florida State offense looked unstoppable at times with him leading it.

There was this pass:

And of course this will be played on Sportscenter for at least the weekend, maybe longer:

Florida State is far from perfect as a football team, but this was without a doubt their most complete effort to date. The defense was stifling, the offense was lethal once it started to fire on all cylinders. Now with a week off to prepare for Clemson, the Seminoles appear to be rounding into form on both sides of the ball just in time.