Thoughts From the Morning After: FSU 63 Maryland 0 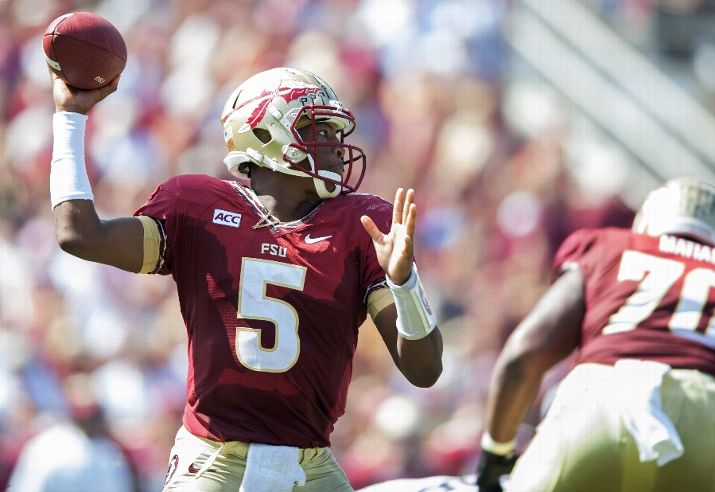 It's difficult to call yesterday's game a coming out party for Florida State and Jameis Winston.

The offense scored more than 41 points for the fifth time in five outings yesterday. They have now scored on six straight possessions at some point in all five of their games. They have now scored a touchdown on the final possession of the first half in all five games and followed up with a score on their first drive of the second half in all five games as well. Saturday was nothing new for Florida State in terms of offensive production.

The difference was - deserving or not - Maryland was ranked.

The 25th ranked team in the country entered the game with the third-ranked scoring defense and limped home having tied the NCAA record for the most lopsided deficit by a ranked team (63 points). The 10.3 points per game they were giving up jumped to 20.8, their defense dropped from third to 33rd.

“If you can’t run the ball that makes it tough. That was one of the match-ups I was concerned about coming in to the game – you know – our offensive line against them. But again, if you have got to go – and they made us one dimensional – give them credit – it makes it very, very difficult.”

In that sense it was a statement game. Stefon Diggs was 8th in total yardage last season. Not in the ACC, in the country. He had 3 touches for 29 yards yesterday. CJ Brown was pressured regularly and left the game early after taking a vicious blow from Jacobbi McDaniel.

And perhaps most impressively after giving up 200 yards rushing last week, Maryland mustered just 33 against them and could not make it onto the scoreboard.

“You always want to play with a chip on your shoulder regardless of what everyone else is saying," said junior DT Tim Jernigain. "But the biggest thing was the way that we prepared a lot this week to get ready, we just came in with a lot of confidence and we prepared the right way.”

Clemson is in two weeks, and now after facing two opponents who had their own bye weeks to prepare for them, FSU gets a week off to prepare for their next foe. The Tigers run more of a spread-style offense like Maryland ran.

That may be good news for Florida State too. Their defense looked like a completely different unit than it had through the first four games on Saturday.

The national hype around Jameis Winston is continuing to grow and with good reason. Winston has already thrown for 1441 yards and 17 touchdowns, he's also run for two and accounts for 19. That's one more than Johnny Manziel had through his first five games last year.

Somebody asked Jimbo Fisher about Jameis Winston's Heisman candidacy yesterday. I'll have a full post on FSU's overt attempts not to feed into the mounting Winston hype later today, but suffice it to say Fisher hedged on the question, "when he keeps winning," was the refrain.

Truth be told, that Heisman candidacy should be in full form come mid-week.

The reasons for that are two-fold. First of all, with Tajh Boyd on the horizon and a career day against a ranked opponent still fresh in the minds of the media (myself included), there will be mounting Heisman attention if just to better sell the game in two weeks between Clemson and FSU. Two potential top-five teams with Heisman front-runners is football gold.

The other reason is Winston legitimately deserves to have his name in the conversation. FSU is a top ten team right now and Winston has been - bar-none - its best player so far this season.

The Heisman hype is real, like it or not.

After playing inside for the past four games Christian Jones slid back outside against Maryland and was asked to rush the passer off the edge for most of the game.

"I felt real comfortable out there. I did it in high school and I did it a little my freshman and sophomore year. It was nothing really new to me, it was just being able to go out there and get adjust back to it," said Jones.

"But yeah, I feel more natural out there. They asked me to play it and I said yeah I wanted to do it. And it's good because we have more speed on the field bringing Terrance [Smith] at the other linebacker spot."

For two guys who have not played in two years, you'd never know it from watching Chris Casher and Jacobbi McDaniel. Casher was second on the team in tackles and notched a sack on Saturday. He missed his senior year of high school over an eligibility issue (non-academic) and then was injured early last season. Casher is making up for it now though. Through five games he has 16 tackles, 3.5 for loss and the sack.

Meanwhile McDaniel - once a highly-touted recruit himself - is reminding people what all the hype was about after missing two years with injuries. On Saturday McDaniel batted a pass down, made three tackles and knocked Maryland QB CJ Brown from the game with a vicious hit.

“It’s huge. All those guys up front when they can dictate like that it makes a big difference,' said Fisher after the game. "He was batting balls – I tell you, he bats more balls for a short guy that I’ve ever seen. He’s an athlete. Jacobbi’s not just a lineman, he has skills. He can get to the ball (and) move around. That’s why we use him in the backfield on short yards because he can adjust his body. He’s a good athlete.”

More Thoughts From the Morning After:

##- Jalen Ramsey continues to impress me. The true freshman still makes the odd mistake here and there, but what's undeniable is his athleticism. Ramsey is a big, rangy defensive back who hits. He delivered several good shots from his position at safety early in the game, but the most impressive play of the afternoon was on a deep pass attempt that was broken up in the endzone. In effect, Ramsey probably broke up a PJ Williams interception. But if you rewatch the game take a look at how much ground Ramsey covers as he gets back to make a play on the ball.

You cannot teach that.

##- Bryan Stork's concussion was likely responsible for at least one of his bad snaps - likely both. The redshirt senior looked discombobulated as he left the field following the second errant snap. On 4th and long Stork looked as though he thought he was the long-snapper (he is not) or as if he wasn't sure of what down it was. Either way, he didn't return and it was announced shortly after he had suffered a concussion.

Stork is a warrior. He's played through a foot injury all season and will likely fight to come back from his concussion as quickly as possible. But FSU also takes concussions very seriously so this bye is likely coming at the perfect time.

“Very proud of Austin. He got settled in the game (had) a couple of blocks. I thought he did a great job and getting him back was crucial.”

##- With two more touchdown receptions on Saturday Nick O'Leary is now third all-time at FSU for TD passes by a tight end with seven. The record is ten.